See the gallery for quotes by Anais Nin. You can to use those 8 images of quotes as a desktop wallpapers. 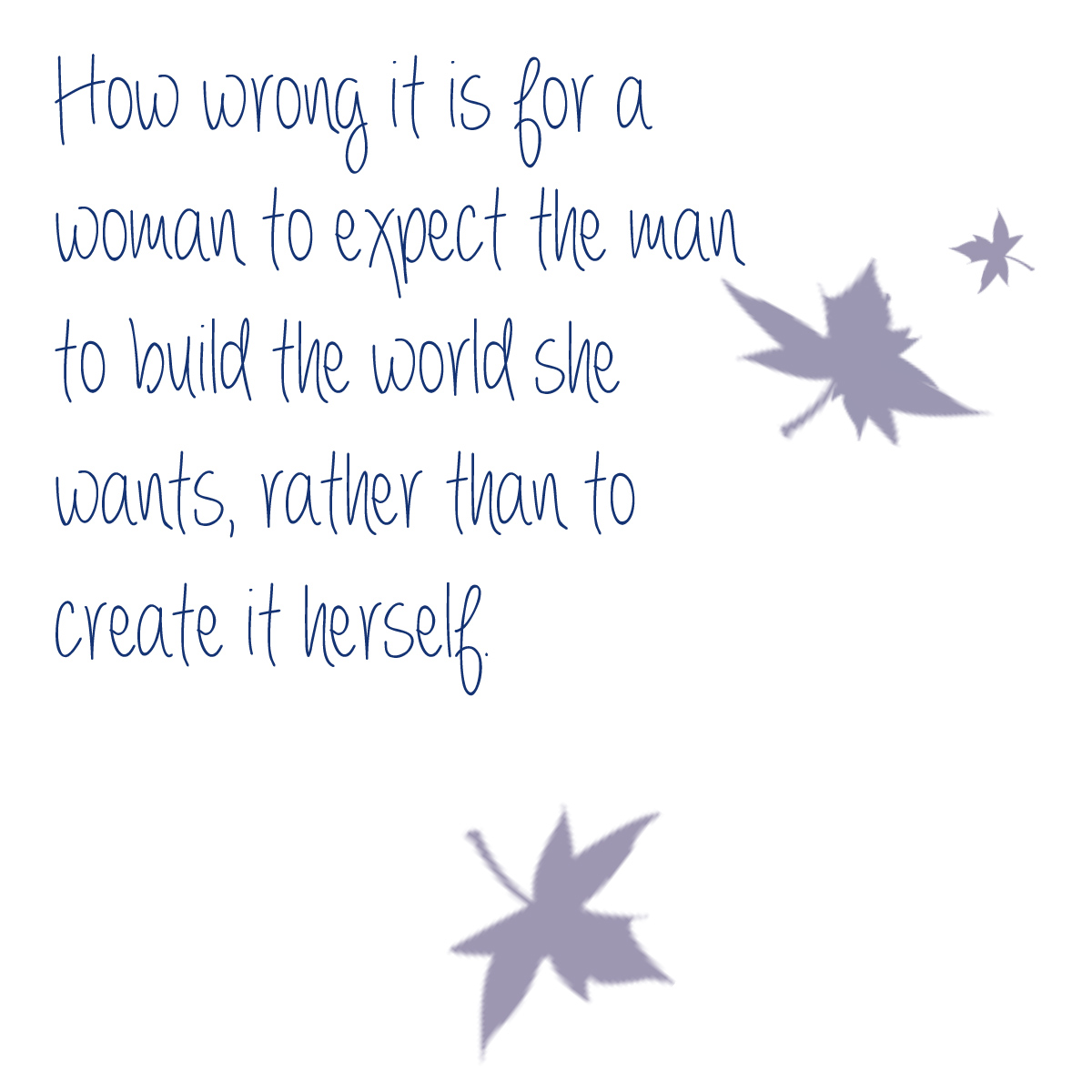 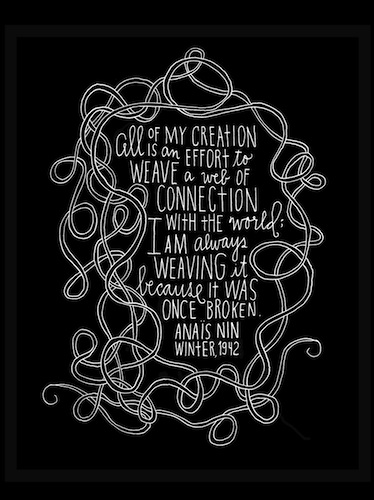 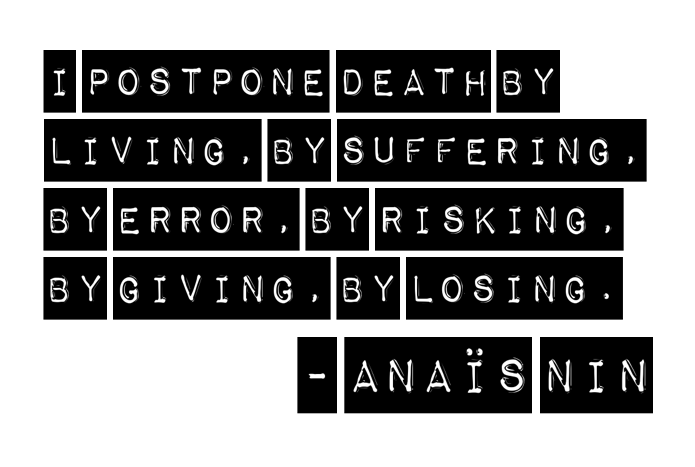 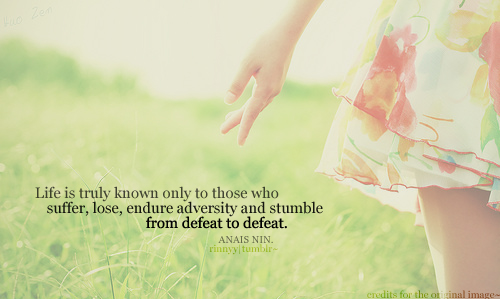 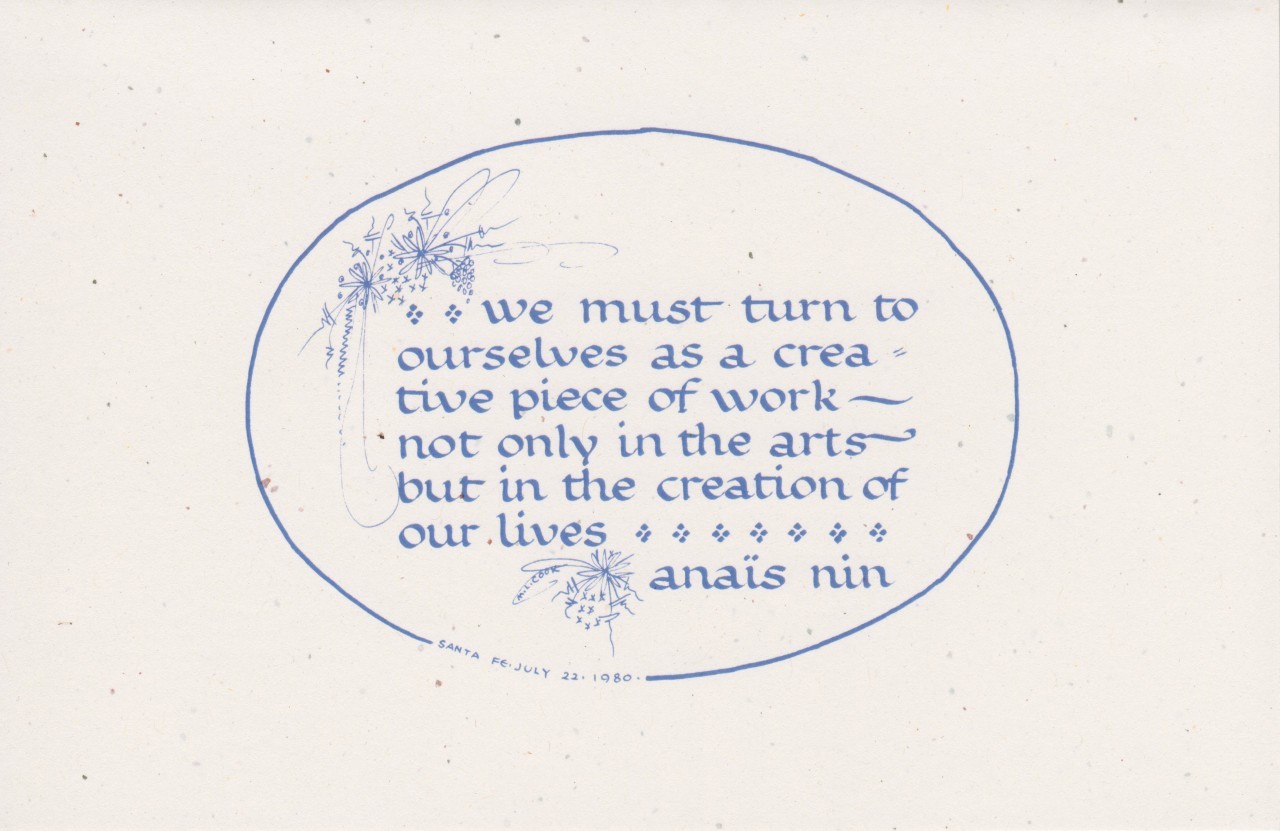 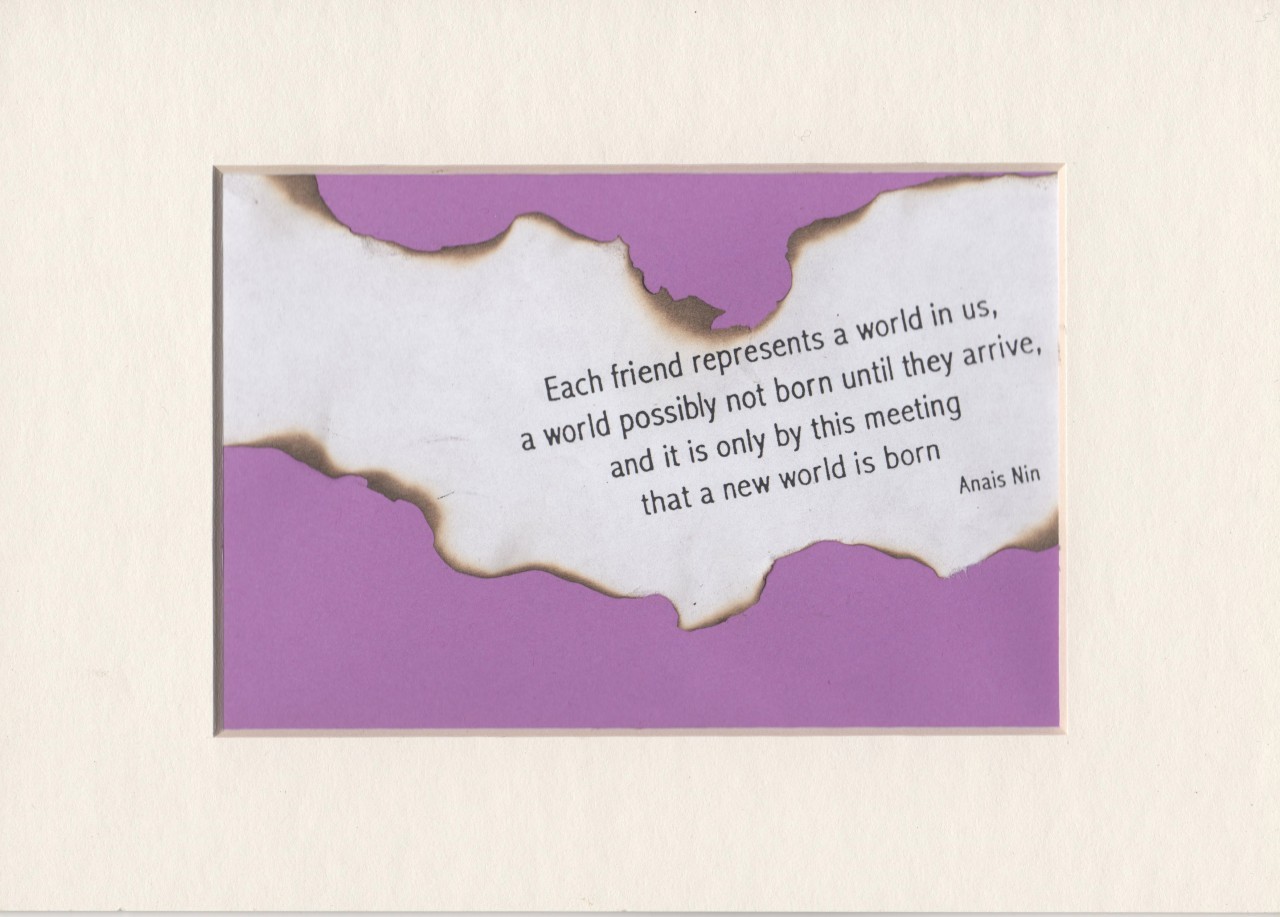 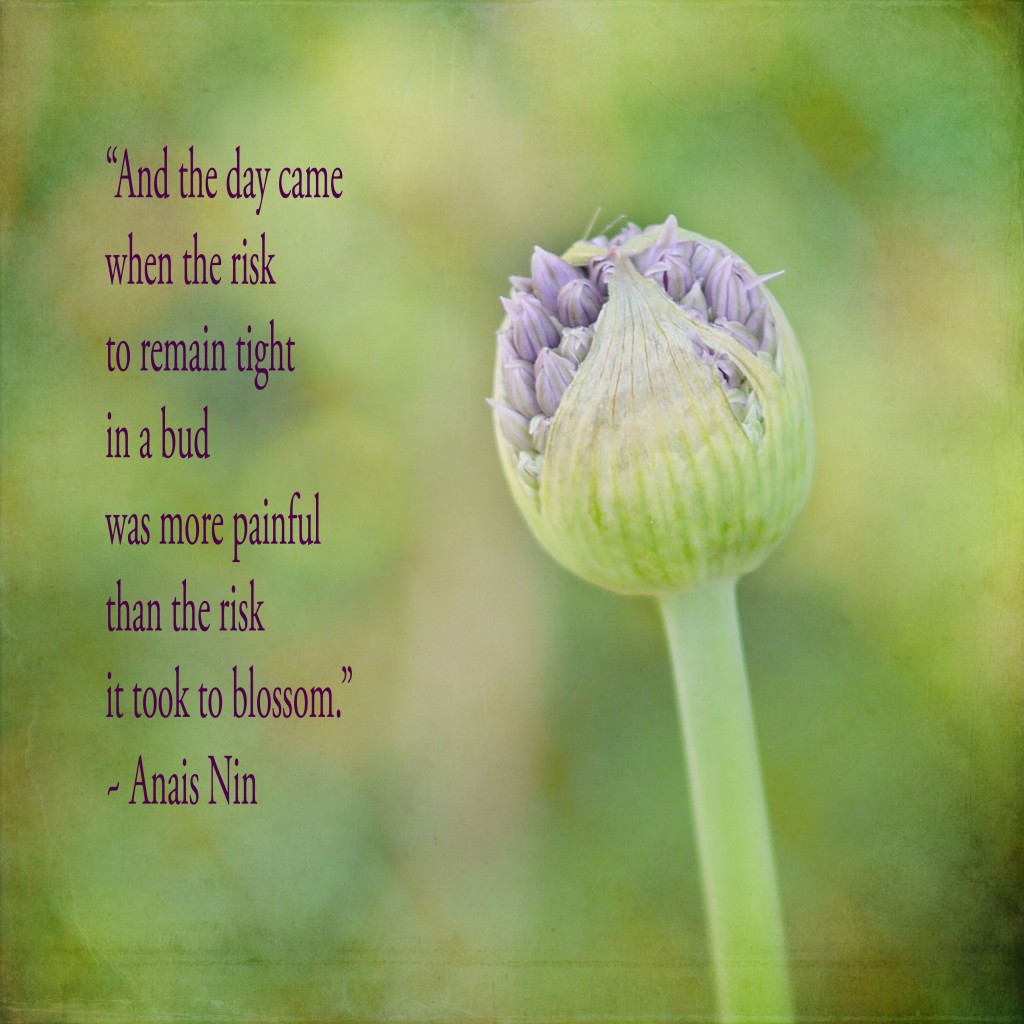 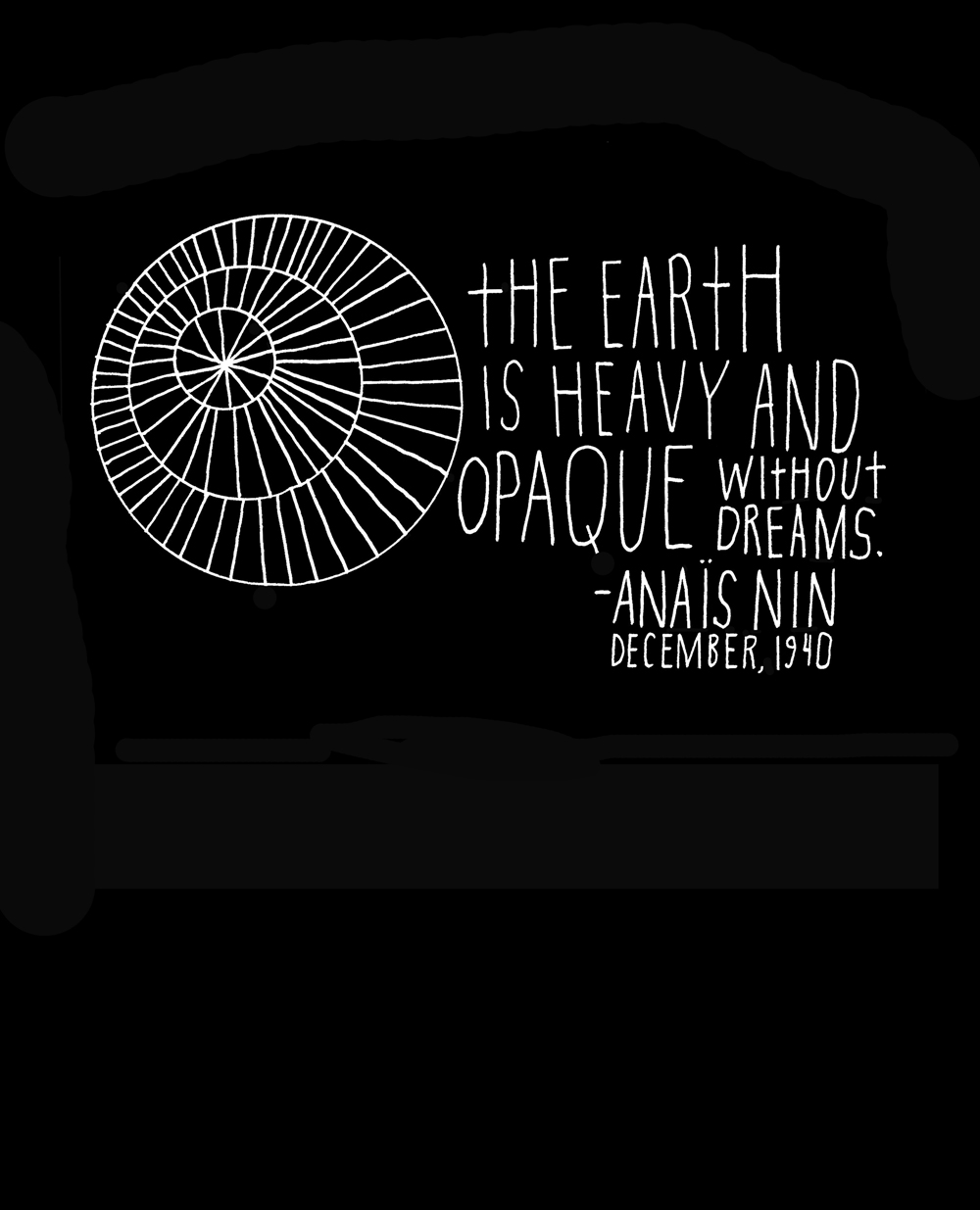 There are many ways to be free. One of them is to transcend reality by imagination, as I try to do.

It's all right for a woman to be, above all, human. I am a woman first of all.

It is the function of art to renew our perception. What we are familiar with we cease to see. The writer shakes up the familiar scene, and, as if by magic, we see a new meaning in it.

The possession of knowledge does not kill the sense of wonder and mystery. There is always more mystery.

The dream was always running ahead of me. To catch up, to live for a moment in unison with it, that was the miracle.

I stopped loving my father a long time ago. What remained was the slavery to a pattern.

The personal life deeply lived always expands into truths beyond itself.

Each contact with a human being is so rare, so precious, one should preserve it.

Our life is composed greatly from dreams, from the unconscious, and they must be brought into connection with action. They must be woven together.

Tags: Others, Tolerable, Yourself

What I cannot love, I overlook. Is that real friendship?

Living never wore one out so much as the effort not to live.

My ideas usually come not at my desk writing but in the midst of living.

Truth is something which can't be told in a few words. Those who simplify the universe only reduce the expansion of its meaning.

I will not be just a tourist in the world of images, just watching images passing by which I cannot live in, make love to, possess as permanent sources of joy and ecstasy.

If all of us acted in unison as I act individually there would be no wars and no poverty. I have made myself personally responsible for the fate of every human being who has come my way.

The human father has to be confronted and recognized as human, as man who created a child and then, by his absence, left the child fatherless and then Godless.

And the day came when the risk to remain tight in a bud was more painful than the risk it took to blossom.

I, with a deeper instinct, choose a man who compels my strength, who makes enormous demands on me, who does not doubt my courage or my toughness, who does not believe me naive or innocent, who has the courage to treat me like a woman.

Each friend represents a world in us, a world not born until they arrive, and it is only by this meeting that a new world is born.

We don't see things as they are, we see them as we are.

Throw your dreams into space like a kite, and you do not know what it will bring back, a new life, a new friend, a new love, a new country.

How wrong it is for a woman to expect the man to build the world she wants, rather than to create it herself.

Love never dies a natural death. It dies because we don't know how to replenish it's source. It dies of blindness and errors and betrayals. It dies of illness and wounds; it dies of weariness, of witherings, of tarnishings.

Life shrinks or expands in proportion to one's courage.

Much more quotes by Anais Nin below the page.

Life is a process of becoming, a combination of states we have to go through. Where people fail is that they wish to elect a state and remain in it. This is a kind of death.

Age does not protect you from love. But love, to some extent, protects you from age.

When we blindly adopt a religion, a political system, a literary dogma, we become automatons. We cease to grow.

Dreams pass into the reality of action. From the actions stems the dream again; and this interdependence produces the highest form of living.

Life is truly known only to those who suffer, lose, endure adversity and stumble from defeat to defeat.

Good things happen to those who hustle.

Anxiety is love's greatest killer. It makes others feel as you might when a drowning man holds on to you. You want to save him, but you know he will strangle you with his panic.

I postpone death by living, by suffering, by error, by risking, by giving, by losing.

Do not seek the because - in love there is no because, no reason, no explanation, no solutions.

Dreams are necessary to life.

The only abnormality is the incapacity to love.

People living deeply have no fear of death.

We travel, some of us forever, to seek other states, other lives, other souls.

There are very few human beings who receive the truth, complete and staggering, by instant illumination. Most of them acquire it fragment by fragment, on a small scale, by successive developments, cellularly, like a laborious mosaic.

A leaf fluttered in through the window this morning, as if supported by the rays of the sun, a bird settled on the fire escape, joy in the task of coffee, joy accompanied me as I walked.

The hardest thing about being famous is that people are always nice to you.

When I was 15, 16, I studied with Stella Adler at the Conservatory of Acting, then I stopped again and went to the Actors Studio when I was 18.

You draw on whatever's relevant to the part you're playing; it makes it more personal.

I didn't have a problem with rejection, because when you go into an audition, you're rejected already. There are hundreds of other actors. You're behind the eight ball when you go in there.

I'll work with a director if I think I'm going to get into a comfortable situation, and if it's someone I respect and who respects me, even if they're not so well known. Movies are hard to make, and you have to work toward a common ethic and do your best.

Good directors can bring certain things out of you, with their intensity or gentleness or sensitivity or understanding. They can make an actor feel he can do no wrong.

I've never been one of those actors who has touted myself as a fascinating human being. I had to decide early on whether I was to be an actor or a personality.

If it's a very emotional scene, you're kind of relieved when you've done it, kind of spent. And there are times when you can be rattled, certain characters if they're hyper, that can carry over, the residue of that. But I try to leave it on the set.

My mother worked for a woman, Maria Ley-Piscator, who with her husband founded the Dramatic Workshop, which was connected to the New School. My mother did proofreading and typing and stuff or her, and as part of her payment, I was able to take acting classes there on Saturdays when I was 10.

Time goes on. So whatever you're going to do, do it. Do it now. Don't wait.

You learned the two greatest thing in life, never rat on your friends, and always keep your mouth shut.

It's important not to indicate. People don't try to show their feelings, they try to hide them.

There's nothing more ironic or contradictory than life itself.

You'll have time to rest when you're dead.

I think Hollywood has a class system. The actors are like the inmates, but the truth is they're running the asylum.

I always go back to how people behave. If you watch how people actually behave in a situation, it's very simple and honest and contained. You don't need to use as much expression, as much feeling. Some characters will boil over, and that's another thing, but a lot of times I think you can just do very, very little.

I always tell actors when they go in for an audition: Don't be afraid to do what your instincts tell you. You may not get the part, but people will take notice.

One of the things about acting is it allows you to live other people's lives without having to pay the price.

The talent is in the choices.

My definition of a good hotel is a place I'd stay at.

There is a certain combination of anarchy and discipline in the way I work.

I spent lunchtime in a grave during the filming of 'Bloody Mama.' When you're younger, you feel that's what you need to do to help you stay in character. When you get older, you become more confident and less intense about it - and you can achieve the same effect.

I think it's important to have had at least a few years of obscurity, where people treat you like everybody else.

Italy has changed. But Rome is Rome.

I love to find new people. It's not for the sake of their being new; it's because if you find someone who perfectly fits a part, that's such a great thing.

I like to visit L.A., but I wouldn't want to live there.

I mean, the actors that I admired were Marlon Brando, Montgomery Clift, an actress named Barbara Harris. And Greta Garbo. They were great actors.

If it's the right chair, it doesn't take too long to get comfortable in it.

In acting, I always try to go back to what would actually be the real situation, the real human behavior in life.

Movies are hard work. The public doesn't see that. The critics don't see it. But they're a lot of work. A lot of work.