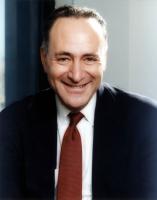 See the gallery for quotes by Charles Schumer. You can to use those 8 images of quotes as a desktop wallpapers. 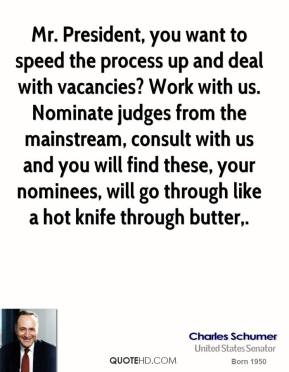 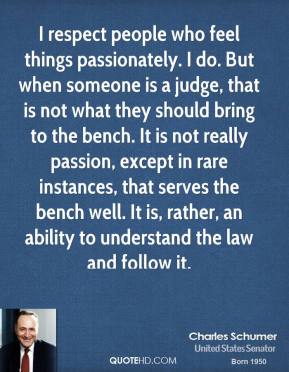 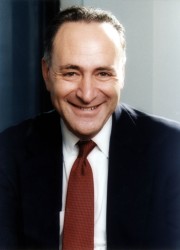 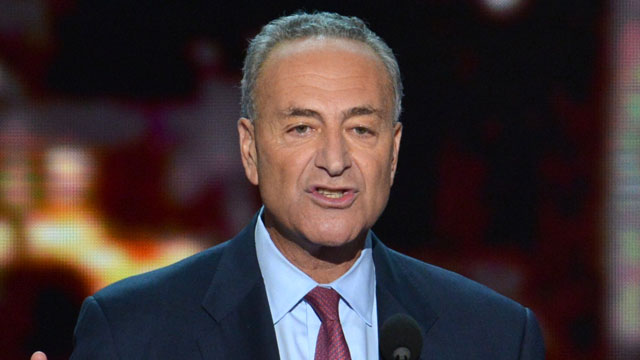 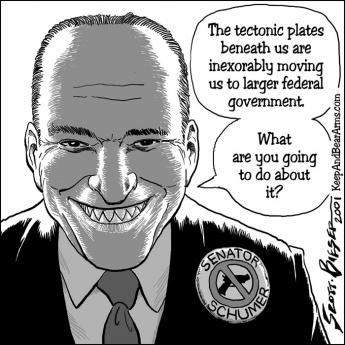 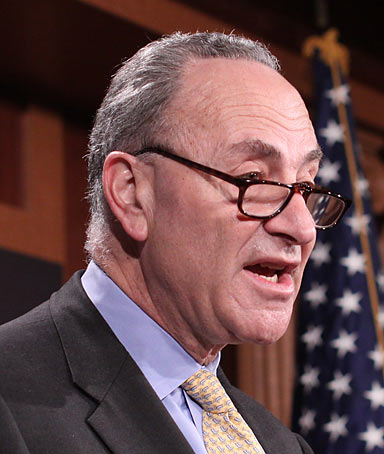 We tend to talk, Democrats, as a party, in legislative terms.

Well, I think it's too early to call Fallujah a failure.

When one has success, the answer is not to undo that success. It is to continue what has been done.

When someone takes a private photo, on a private cell phone, it should remain just that: private.

You do have to change things as warfare changes.

But these days there are a lot of younger people who would like to go into teaching but don't because the economic opportunities are sometimes elsewhere.

I believe the war on terror is the vital discussion of this decade and of our generation, probably. To win the war on terror, you need a good offense and a good defense. On defense, I regret to say, basically, this administration has not come close to doing what is necessary.

I made education the highest priority of my campaign - actually education and jobs - and the reason is a simple one: I think the future of America depends on it.

I respect people who feel things passionately. I do. But when someone is a judge, that is not what they should bring to the bench. It is not really passion, except in rare instances, that serves the bench well. It is, rather, an ability to understand the law and follow it.

I told the President, I told Rahm Emanuel and others in the administration that I thought the policy they took to try to bring about negotiations is counter-productive, because when you give the Palestinians hope that the United States will do its negotiating for them, they are not going to sit down and talk.

Ideological warriors whether from the Left or the Right are bad news for the bench. They tend to make law, not interpret law. And that's not what any of us should want from our judges.

In a brave new world, a post-September 11 world, anyone is going to make certain mistakes. The mistakes that have been made on homeland security, on protecting our Nation from another terrorist attack, are mistakes of omission. We are simply not doing enough.

Let me say this, to all of the chattering class that so much focuses on those little tiny, yes, porky amendments - the American people really don't care.

Middle class people, I think they realize that Romney is not for them because of his narrowness, but they want to make sure that Barack Obama is focused on them with things that will make a difference. They know he tried, but they also know that it didn't do as well as they would have liked.

Mitt Romney would move the Court even further right, putting landmark decisions like Roe v. Wade at risk. Some say Romney would repeat the past. I disagree - he'd be worse.

Mitt Romney's only bottom line is the one at the end of his own bank statement. The problem is that he confuses his own narrow, self-interest - and that of people like him - with the national interest. He thinks as long as we do right by the Mitt Romneys of the world, America will be just fine.

My father, Abe, was a small businessman. For 32 years, he ran an exterminating company. That may explain why our family always associated the smell of roach spray with love.

Palestinians don't really believe in a state of Israel. They, unlike a majority of Israelis, who have come to the conclusion that they can live with a two-state solution to be determined by the parties, the majority of Palestinians are still very reluctant, and they need to be pushed to get there.

Republicans always try to paint Democrats as weak on defense. This time, they can't. After all, Mitt Romney's idea of an overseas accomplishment is sending U.S. jobs there.

The dome of the U.S. Capitol has fallen into severe disrepair... As the Chairman of the Senate Committee on Rules and Administration, which oversees matters of the Capitol's physical plant, I have serious concerns about the consequences of omitting this funding from the stopgap spending measure.

There are many reasons why Mitt Romney should not become president, but perhaps the most important of all is the narrowness of his experience, perspective and vision.

Today, families like the one I grew up in still believe in that American dream. But as President Obama says, it's a make-or-break moment for the middle class. Mitt Romney's plans would make things worse.

Much more quotes by Charles Schumer below the page.

Voters did say 'repeal health care,' they did say 'reduce the size of government.' But not a single one of them from the tea party or anywhere said 'give tax breaks to the wealthiest.'

We are on the precipice of a crisis, a Constitutional crisis. The checks and balances, which have been at the core of this Republic, are about to be evaporated by the nuclear option. The checks and balances that say if you get 51% of the vote, you don't get your way 100% of the time. It is amazing, it's almost a temper tantrum.

We certainly want those at the top to do well, but if you base your entire presidency and your entire economic platform on helping them do even better, you're missing what makes the economy tick. Because not everyone has been as fortunate as Mitt Romney, you cannot base your whole approach on a life experience as rarified as his.

Well, the tough thing for them is that the Republican primary is pretty far over to the right, just as the Democratic primary is further over to the left than the average voter in each party.

When Mitt Romney says he wants to reform the tax code, hold on to your wallets. We know Mitt Romney never met a tax haven he didn't like. But his new favorite tax haven is actually not the Cayman Islands - its Paul Ryan's budget.

You can set up whatever negotiations or structure you want, but until the Palestinians are willing to accept the fact, as the majority of Israelis do, that there should be two states between the Jordan and the Mediterranean, we won't have peace.

I think teaching should be an exalted profession, not a picked-on profession.

Inaction is perhaps the greatest mistake of all.

Giving up even an ounce of precious freedom is a very serious thing to do.

Do not let arguments of expediency persuade you. That is the slow road to oblivion. That is the tortured path to undoing step by step, bit by bit, as the river creates a canyon, the way of life that we love.

Barack Obama knows that to create an economy built to last, we need to focus on middle-class families. Families who stay up on Sunday nights pacing the floor, like my dad did, while their children, tucked in bed, dream big dreams. Families who aren't sure what Monday morning will bring, but who believe our nation's best days are still ahead.

Whether you are a Democrat or Republican, whether you are a liberal or a conservative, we know that neither this President nor prior Presidents of both parties did everything right or we would not have had a 9/11.

Tags: Both, President, Whether

A devastating commentary on the war in Iraq is that we have been unable to spend money on infrastructure.

America is a place where we all come together. It is a place of consensus.

Anyone who thinks they have a monopoly on truth, and there is only one way to see the world, always gets us into trouble.

Arafat was a barrier to peace.

As long as the Palestinians send terrorists onto school buses and to nightclubs to blow up people, Israel has no choice but to build the fence.

But I don't think the Democratic Party is at eye level with the middle class.

I want to attract the best people into teaching.

I went to the public schools myself. And they were great for me.

I'd like to see the health care professionals making decisions, not some bureaucrat in Indianapolis working for an insurance company.

I'm strongly for a patient Bill of Rights. Decisions ought to be made by doctors, not accountants.

I'm totally opposed to vouchers. I will fight them tooth and nail.

If we say the Geneva Convention is obsolete, then what do others who have our soldiers say?

In today's competitive economy, to stand still is to die.

It is essential that all Americans take the time to honor and remember those individuals who gave their lives in defense of our liberty.

So I want my kids to go to public schools because I think it's a better education overall.

Soft money will find its way and seep into the political system and corrode it, unless we plug every hole.

To those like Mitt Romney who want to take us backwards, let's send a strong message in November: as we say in Brooklyn, 'Fuhgeddaboutit.'