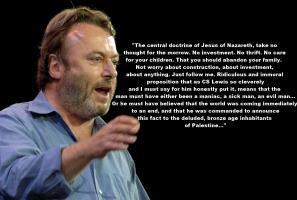 See the gallery for quotes by Christopher Hitchens. You can to use those 8 images of quotes as a desktop wallpapers. 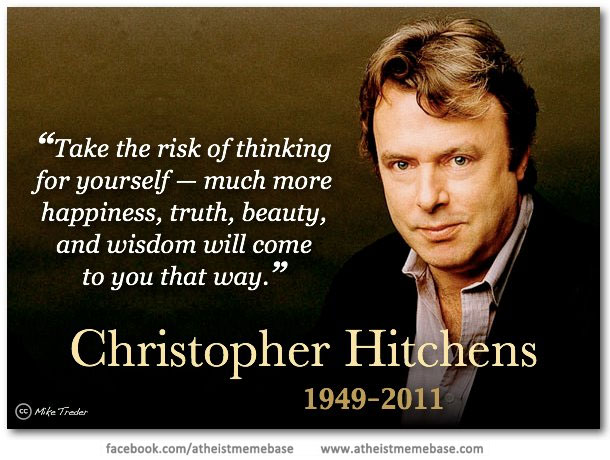 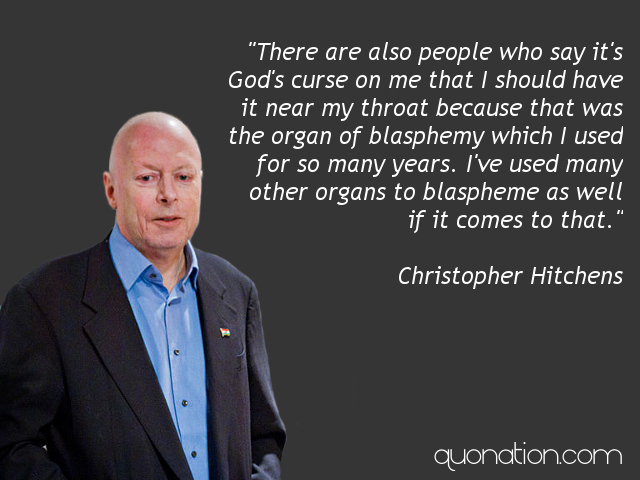 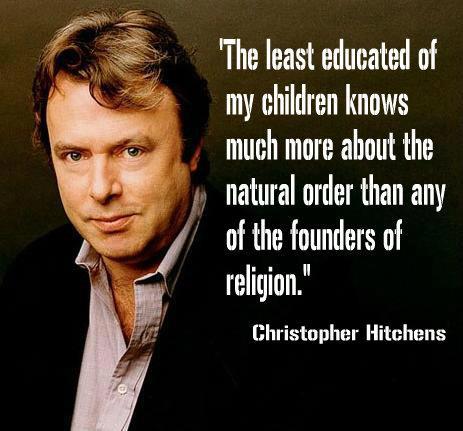 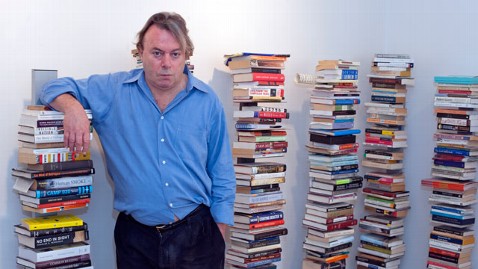 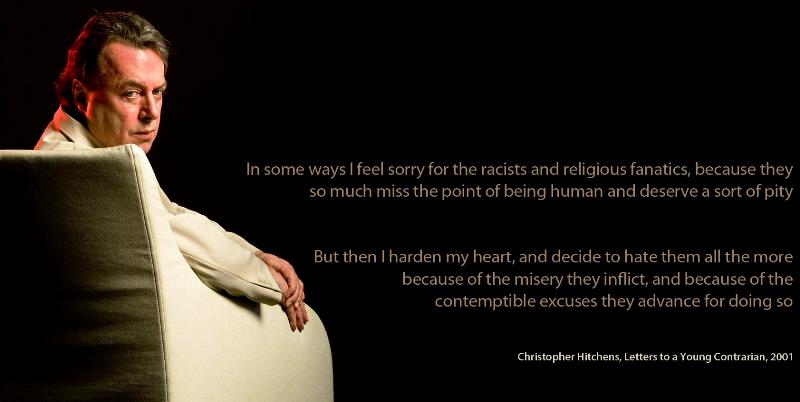 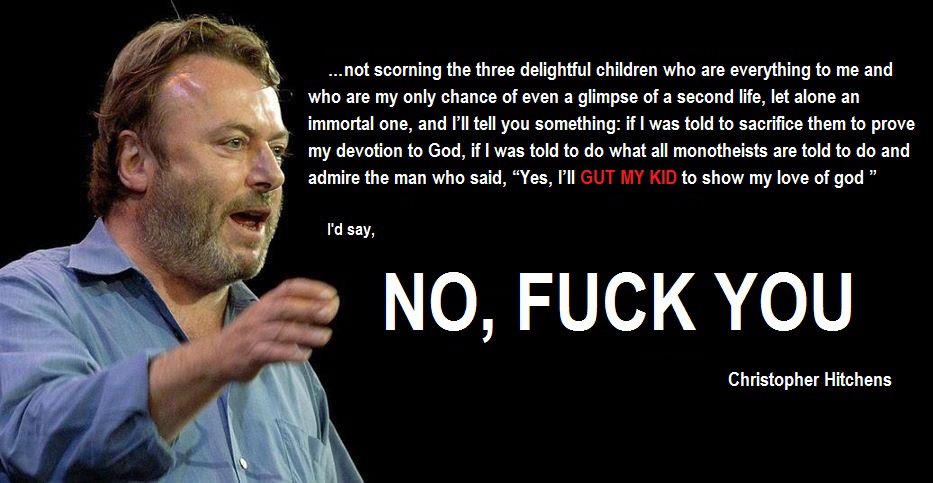 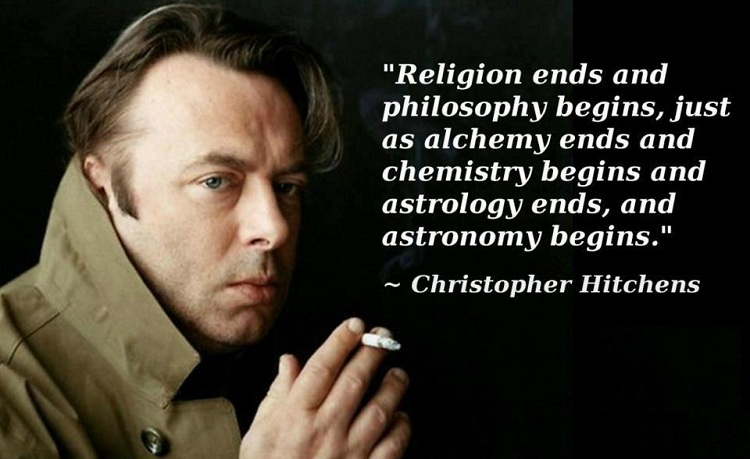 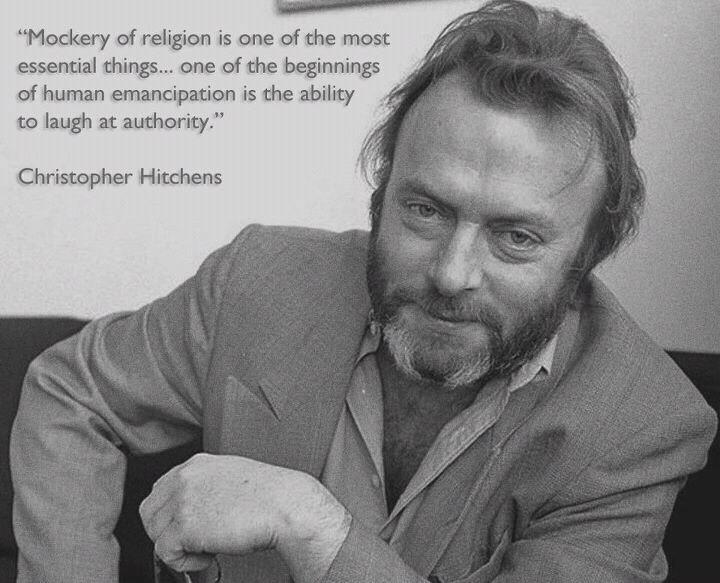 For most of my life I let women do the driving and was happy to let them.

I have more than once in my time woken up feeling like death.

I'm here as a product of process of evolution, which doesn't make very many exceptions. And which rates life relatively cheaply.

The violence in the Bible is appalling.

It's true that obscenity is a matter of taste and in the eye of the beholder.

The amazing fact is that America is founded on a document. It's a work in progress. It can be tested by each generation.

The Koran shows every sign of being thrown together by human beings, as do all the other holy books.

To terrify children with the image of hell... to consider women an inferior creation. Is that good for the world?

Trust is not the same as faith. A friend is someone you trust. Putting faith in anyone is a mistake.

I don't envy or much respect people who are completely politicised.

I have tried for much of my life to write as if I was composing my sentences to be read posthumously.

I make preparations both to live and to die every day, but with the emphasis on not dying, and on acting as if I was going to carry on living.

I was becoming post-ideological.

I've proved to be as difficult to convert as I am to hypnotize.

If you can talk, you can write.

In the grip of a neurological disorder, I am fast losing control of words even as my relationship with the world has been reduced to them.

Religion is not going to come up with any new arguments.

Ronald Reagan used to alarm other constituencies by speaking freely about the End Times foreshadowed in the Bible.

Solidarity is an attitude of resistance, I suppose, or it should be.

Talking, it seemed to me, was the point of adult existence.

The concept of loneliness and exile and self-sufficiency continually bucks me up.

The human wish to credit good things as miraculous and to charge bad things to another account is apparently universal.

Well, I'll put it this way: you can certainly say belief in God makes people behave worse. That can be proved beyond a doubt.

Much more quotes by Christopher Hitchens below the page.

I love it when Muslims go to war with each other, as I do when the Christians do, because it shows there's no such thing as the Christian world and the Islamic world. That's all crap.

It's impossible, I think, however much I'd become disillusioned politically or evolve into a post-political person, I don't think I'd ever change my view that socialism is the best political moment humans have ever come up with.

Cancer victimhood contains a permanent temptation to be self-centred and even solipsistic.

Chemotherapy isn't good for you.

For the people who ostensibly wish me well or are worried about my immortal soul, I say I take it kindly.

Henry Kissinger should have the door shut in his face by every decent person and should be shamed, ostracized and excluded.

I became a journalist because one didn't have to specialise.

I didn't think Marilyn Monroe was beautiful. It used to worry me. I thought maybe I'm not put together like the other chaps.

I do not believe any of the statistical claims that are made about public opinion. I don't see why anybody does.

I don't consider myself to be that credulous.

I don't even like showing my stuff to publishers and editors much.

I don't think consensus-building politics is what I'm meant to be doing.

I don't think souls or bodies can be changed by incantation. Or anything else by the way.

I don't think the war in Afghanistan was ruthlessly enough waged.

I felt Clinton represented the worst of the 1960s.

I have nowhere claimed nor even implied that unbelief is a guarantee of good conduct or even an indicator of it.

I have quite a decent constitution in spite of all my abuse of it and my advanced years. I'm still quite robust.

I retain what's interesting to me, but I don't have a lot of strategic depth.

I sometimes wish I were suffering in a good cause, or risking my life for the good of others, instead of just being a gravely endangered patient.

I still think like a Marxist in many ways.

I think I write in a fairly self-confident manner.

I think the materialist conception of history is valid.

I took part in what was actually the last eruption of Marxist internationalism.

I used to wish there was a useful term for those of us who thought American power should be used to remove psychopathic dictators.

I vote and I do jury duty.

I wanted to write.

I worked out early on to give up things I couldn't do well at all.

I'd always somehow felt slightly as if I'd been born in the wrong country.

I'm afraid the SS's relationship with the Catholic Church is something the Church still has to deal with and does not deny.

I'm terrified of losing my voice.

I've been to Uganda and to North Korea and to Eritrea, countless horror spots around the world.

It doesn't take much to make me angry.

It's surprising to me how many of my friends send Christmas cards, or holiday cards, including my atheist and secular friends.

Littera scripta manet - 'The written word will remain'. That's true, but it won't be that much comfort to me.

Millions of people die every day. Everyone's got to go sometime.

Not many people come through esophageal cancer and live to talk about it, or not for long.

Of course, I do everything for money.

Only the aspirants for president are fool enough to believe what they read in the newspapers.

Ordinary morality is innate in my view.

Pakistan has to export a lot of uneducated people, many of whom have become infected with the most barbaric reactionary ideas.

Ronald Reagan said that he sought a Star Wars defense only in order to share the technology with the tyrants of the U.S.S.R.

Ronald Reagan used to alarm his Soviet counterparts by saying that surely they'd both unite against an invasion from Mars.

The fact is: It's true what they say about the United States. It is a land of opportunity. It is too various to get bored with it.

The Islamists will try to spoil everything for everyone.

The penalty for getting mugged in an American city and losing your ID is that you can't fly home.

The people who tend to raise antiwar slogans will do so generally when it's American or British interests involved.

To be in opposition is not to be a nihilist.

When I look back on what I did for the Left, I'm in a small way quite proud of some of it - I only wish I'd done more.

The cause of my life has been to oppose superstition. It's a battle you can't hope to win - it's a battle that's going to go on forever. It's part of the human condition.

Millions of people die every day. Everyone's got to go sometime. I've came by this particular tumor honestly. If you smoke, which I did for many years very heavily with occasional interruption, and if you use alcohol, you make yourself a candidate for it in your sixties.

I don't think Romney is wacky at all, but religion makes intelligent people say and do wacky things, believe and affirm crazy things. Left on his own, Romney would never have said something like the Garden Of Eden was in Missouri, and will be again.

One has children in the expectation of dying before them. In fact, you want to make damn sure you die before them, just as you plant a tree or build a house knowing, hoping that it will outlive you. That's how the human species has done as well as it has.

One of the many problems with the American left has been its image as something rather too solemn, mirthless, herbivorous, dull, monochrome, righteous, and boring.

People until I was 60 would always say they thought I looked younger, which I think, without flattering myself, I did, but I think I certainly have, as George Orwell says people do after a certain age, the face they deserve.

Even with all the advantages of retrospect, and a lot of witnesses dead and gone, you can't make your life look as if you intended it or you were consistent. All you can show is how you dealt with various hands.

I could not do what I do, and teach a class, and never miss a deadline, never be late for anything if I was a lush, OK? I would really love to read a piece that said, 'He is not a lush.' That would be fabulous, it would be a first, I could show it to people and say, 'Look!'

If you look at any Muslim society and you make a scale of how developed they are, and how successful the economy is, it's a straight line. It depends on how much they emancipate their women.

The press is still investing itself, it seems to me, in a sort of cynicism. It comes out better for them if they can predict hard times, bogging down, sniping, attrition.

All the time, I've felt that life is a wager and that I probably was getting more out of leading a bohemian existence as a writer than I would have if I didn't.

Even if I accepted that Jesus - like almost every other prophet on record - was born of a virgin, I cannot think that this proves the divinity of his father or the truth of his teachings. The same would be true if I accepted that he had been resurrected.

I'm not particularly a feminist, but if you get women off the animal cycle of reproduction and give them some say in how many children they'll have, immediately the floor will rise.

If I'm in a political argument, I think I can, with reasonable accuracy and without boasting, put the other person's side of the case at least as well as they could. One has to be able to say that in any well-conducted argument.

One of the great questions of philosophy is, do we innately have morality, or do we get it from celestial dictation? A study of the Ten Commandments is a very good way of getting into and resolving that issue.

Primate and elephant and even pig societies show considerable evidence of care for others, parent-child bonding, solidarity in the face of danger, and so on.

The worst days are when you feel foggy in the head - chemo-brain they call it. It's awful because you feel boring. As well as bored. And stupid. And resigned.