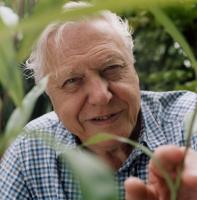 See the gallery for quotes by David Attenborough. You can to use those 8 images of quotes as a desktop wallpapers. 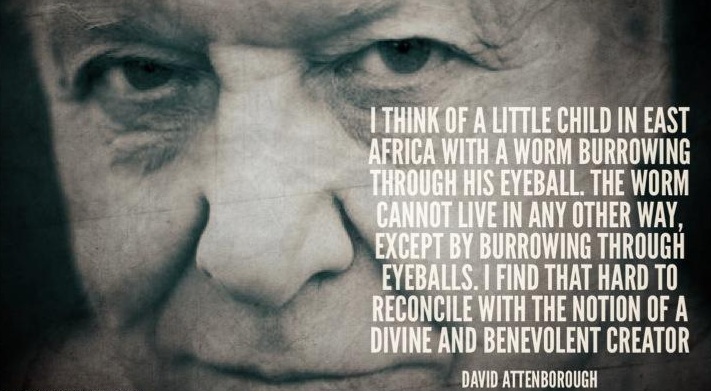 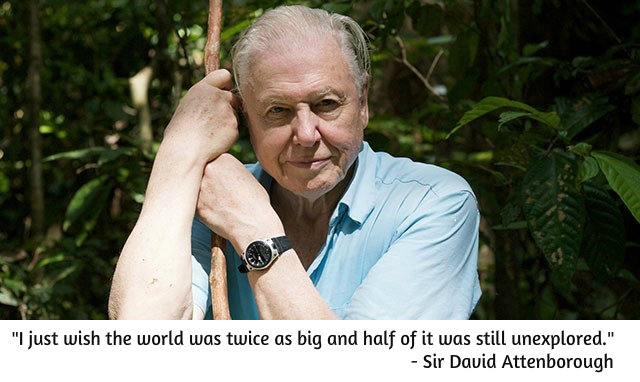 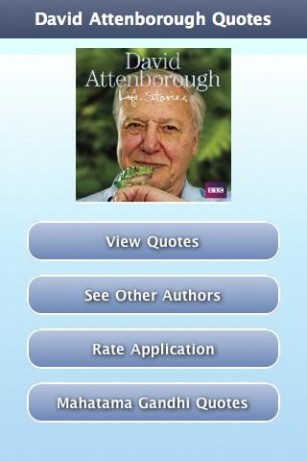 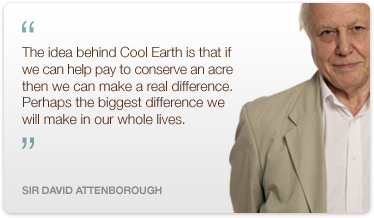 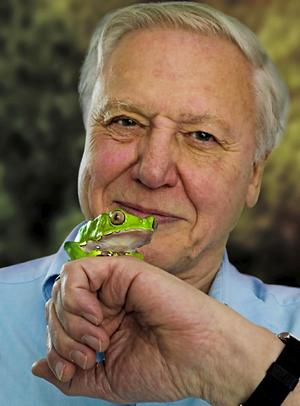 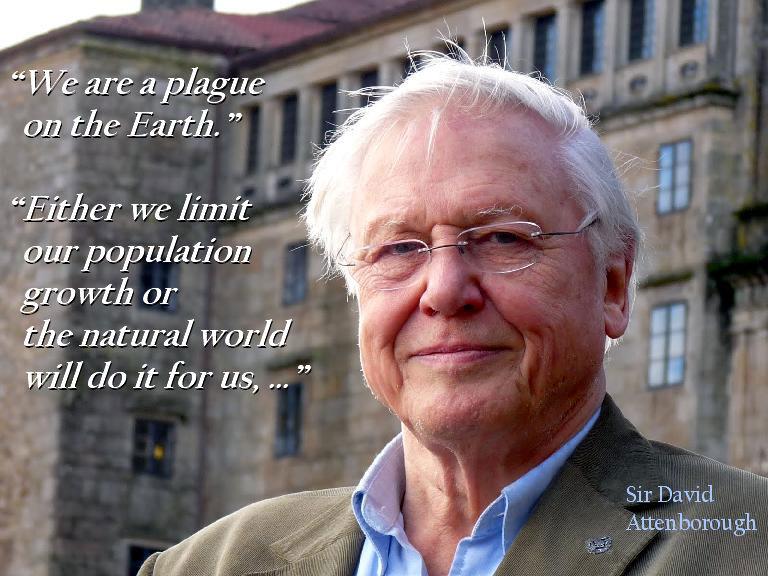 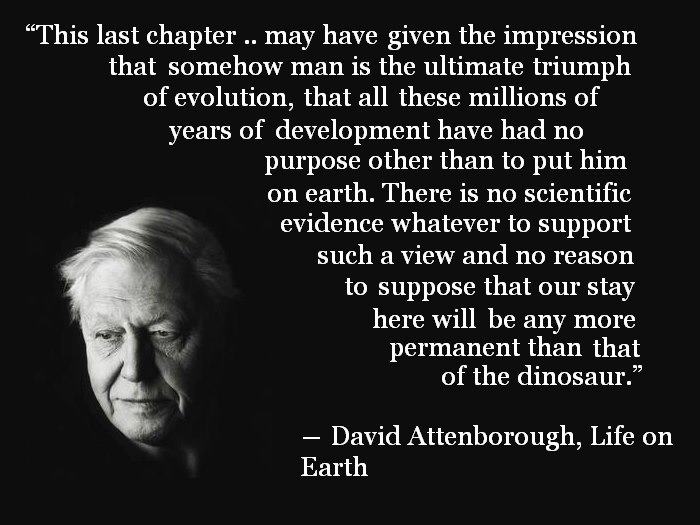 Before the BBC, I joined the Navy in order to travel.

I am an ardent recycler. I would like to think that it works. I don't know whether it does or not.

I don't approve of sunbathing, and it's bad for you.

I suffer much less than many of my colleagues. I am perfectly able to go to Australia and film within three hours of arrival.

I'm against this huge globalisation on the basis of economic advantage.

I'm not a propagandist, I'm not a polemicist; my primary interest is just looking at and trying to understand how animals work.

I'm not in politics.

Natural history is not about producing fables.

Nature isn't positive in that way. It doesn't aim itself at you. It's not being unkind to you.

The climate, the economic situation, rising birth rates; none of these things give me a lot of hope or reason to be optimistic.

There is no question that climate change is happening; the only arguable point is what part humans are playing in it.

We are a plague on the Earth.

You have to steer a course between not appalling people, but at the same time not misleading them.

You know, it is a terrible thing to appear on television, because people think that you actually know what you're talking about.

I often get letters, quite frequently, from people who say how they like the programmes a lot, but I never give credit to the almighty power that created nature.

I've been to Nepal, but I'd like to go to Tibet. It must be a wonderful place to go. I don't think there's anything there, but it would be a nice place to visit.

If you watch animals objectively for any length of time, you're driven to the conclusion that their main aim in life is to pass on their genes to the next generation.

Many individuals are doing what they can. But real success can only come if there is a change in our societies and in our economics and in our politics.

All we can hope for is that the thing is going to slowly and imperceptibly shift. All I can say is that 50 years ago there were no such thing as environmental policies.

Cameramen are among the most extraordinarily able and competent people I know. They have to have an insight into natural history that gives them a sixth sense of what the creature is going to do, so they can be ready to follow.

I had a huge advantage when I started 50 years ago - my job was secure. I didn't have to promote myself. These days there's far more pressure to make a mark, so the temptation is to make adventure television or personality shows. I hope the more didactic approach won't be lost.

I mean, it is an extraordinary thing that a large proportion of your country and my country, of the citizens, never see a wild creature from dawn 'til dusk, unless it's a pigeon, which isn't really wild, which might come and settle near them.

I would be absolutely astounded if population growth and industrialisation and all the stuff we are pumping into the atmosphere hadn't changed the climatic balance. Of course it has. There is no valid argument for denial.

I'd like to see the giant squid. Nobody has ever seen one. I could tell you people who have spent thousands and thousands of pounds trying to see giant squid. I mean, we know they exist because we have seen dead ones. But I have never seen a living one. Nor has anybody else.

I'm absolutely strict about it. When I land, I put my watch right, and I don't care what I feel like, I will go to bed at half past eleven. If that means going to bed early or late, that's what I live by. As soon as you get there, live by that time.

Much more quotes by David Attenborough below the page.

If I were beginning my career today, I don't think I would take the same direction. Television is at a crossroads at the moment. And although I am not up to date technologically, I suspect that somewhere out there people are conveying things about natural history by means other than television, and I think if I were beginning today, I'd be there.

If my grandchildren were to look at me and say, 'You were aware species were disappearing and you did nothing, you said nothing', that I think is culpable. I don't know how much more they expect me to be doing, I'd better ask them.

In the old days... it was a basic, cardinal fact that producers didn't have opinions. When I was producing natural history programmes, I didn't use them as vehicles for my own opinion. They were factual programmes.

It was regarded as a responsibility of the BBC to provide programs which have a broad spectrum of interest, and if there was a hole in that spectrum, then the BBC would fill it.

It's coming home to roost over the next 50 years or so. It's not just climate change; it's sheer space, places to grow food for this enormous horde. Either we limit our population growth or the natural world will do it for us, and the natural world is doing it for us right now.

People talk about doom-laden scenarios happening in the future: they are happening in Africa now. You can see it perfectly clearly. Periodic famines are due to too many people living on land that can't sustain them.

Steve Irwin did wonderful conservation work but I was uncomfortable about some of his stunts. Even if animals aren't aware that you are not treating them with respect, the viewers are.

Television of course actually started in Britain in 1936, and it was a monopoly, and there was only one broadcaster and it operated on a license which is not the same as a government grant.

The process of making natural history films is to try to prevent the animal knowing you are there, so you get glimpses of a non-human world, and that is a transporting thing.

The whole of science, and one is tempted to think the whole of the life of any thinking man, is trying to come to terms with the relationship between yourself and the natural world. Why are you here, and how do you fit in, and what's it all about.

You can cry about death and very properly so, your own as well as anybody else's. But it's inevitable, so you'd better grapple with it and cope and be aware that not only is it inevitable, but it has always been inevitable, if you see what I mean.

You can only get really unpopular decisions through if the electorate is convinced of the value of the environment. That's what natural history programmes should be for.

An understanding of the natural world and what's in it is a source of not only a great curiosity but great fulfillment.

People are not going to care about animal conservation unless they think that animals are worthwhile.

People must feel that the natural world is important and valuable and beautiful and wonderful and an amazement and a pleasure.

I can mention many moments that were unforgettable and revelatory. But the most single revelatory three minutes was the first time I put on scuba gear and dived on a coral reef. It's just the unbelievable fact that you can move in three dimensions.

I just wish the world was twice as big and half of it was still unexplored.

What I am interested in with birds, just as I am with spiders or monkeys, is what they do and why they do it.

It is that range of biodiversity that we must care for - the whole thing - rather than just one or two stars.

I don't run a car, have never run a car. I could say that this is because I have this extremely tender environmentalist conscience, but the fact is I hate driving.

The question is, are we happy to suppose that our grandchildren may never be able to see an elephant except in a picture book?

Being in touch with the natural world is crucial.

Crying wolf is a real danger.

As far as I'm concerned, if there is a supreme being then He chose organic evolution as a way of bringing into existence the natural world... which doesn't seem to me to be necessarily blasphemous at all.

If I can bicycle, I bicycle.

The only way to save a rhinoceros is to save the environment in which it lives, because there's a mutual dependency between it and millions of other species of both animals and plants.

Tags: Between, Both, Lives

We keep putting on programmes about famine in Ethiopia; that's what's happening. Too many people there. They can't support themselves - and it's not an inhuman thing to say. It's the case. Until humanity manages to sort itself out and get a coordinated view about the planet it's going to get worse and worse.

Everyone likes birds. What wild creature is more accessible to our eyes and ears, as close to us and everyone in the world, as universal as a bird?

I think a major element of jetlag is psychological. Nobody ever tells me what time it is at home.

It's a moral question about whether we have the right to exterminate species.

The fundamental issue is the moral issue.

Well, I'm having a good time. Which makes me feel guilty too. How very English.