See the gallery for quotes by Donald Johanson. You can to use those 7 images of quotes as a desktop wallpapers. 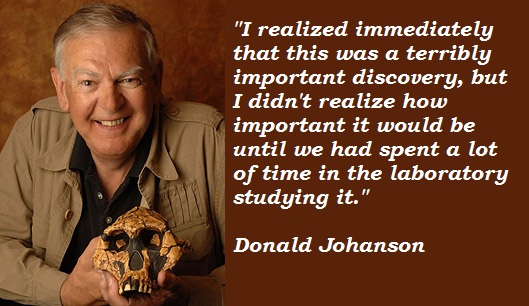 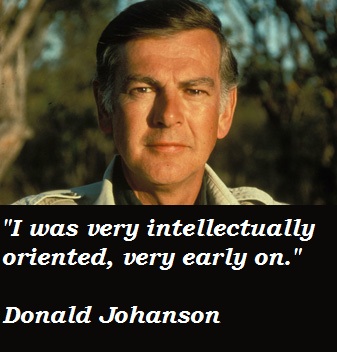 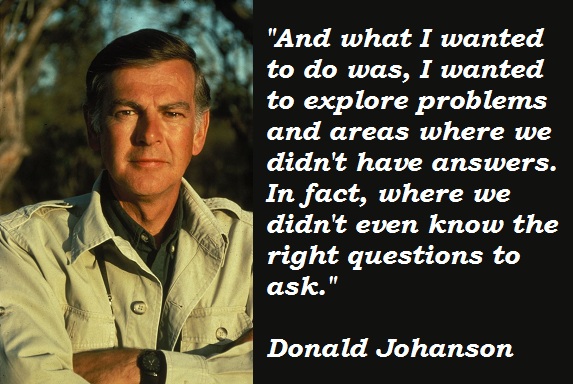 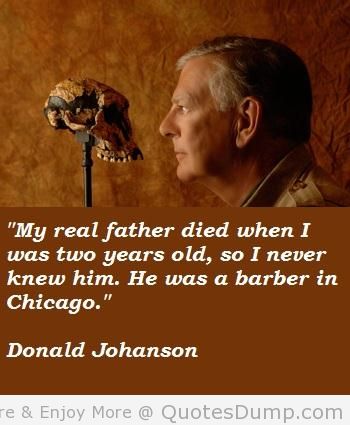 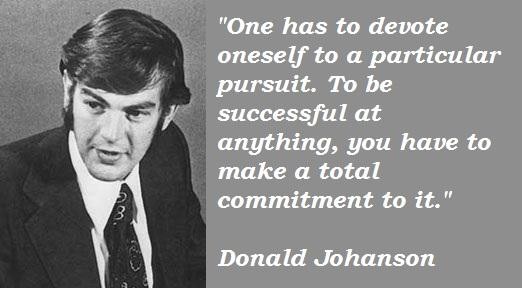 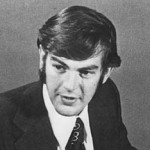 There have been some friendships lost over this. That's the most difficult for me. I find it very uncomfortable to know that I was at one time close friends with someone, and because of jealousies and misunderstandings and so on, these friendships have dissolved.

My real father died when I was two years old, so I never knew him. He was a barber in Chicago.

I was very intellectually oriented, very early on.

One has to devote oneself to a particular pursuit. To be successful at anything, you have to make a total commitment to it.

As an undergraduate, I had an opportunity to go on a number of archeological digs. So I had experience excavating, digging up remains of ancient Indian villages in the Midwest and in the Southwest.

But it really wasn't until three to four years later, when we had an opportunity in the lab to make very detailed observations, and comparisons with other fossil discoveries, that we realized she was a new species of human ancestor.

Tags: Human, She, Until

I realized immediately that this was a terribly important discovery, but I didn't realize how important it would be until we had spent a lot of time in the laboratory studying it.

I think that many of my ideas are correct, but I'll bet you, before my death other discoveries will be made that will prompt me to alter various ideas I have about human evolution.

I was aware of it, but I grew up in a very a-religious family. My mother never went to church, she never had any religious training or background. It was never a part of our social interaction.

In our case, finding a Lucy is unique. No one will ever find another Lucy. You can't order one from a biological supply house. It's a unique discovery, a unique specimen.

Lucy brought with her an image of our human ancestors that you don't get when you find a jaw or an arm bone or a leg bone. Here was 40 percent of a single skeleton.

Most achievers I know are people who have made a strong and deep dedication to pursuing a particular goal. That dedication took a tremendous amount of effort.

Normally, we are happy to find a fragment of jaw, a few isolated teeth, a bit of an arm, a bit of a skull. But to find associated body parts is extremely rare.

This was the most important discovery I had ever made in my life. It was a discovery which has irrevocably changed my whole life's direction. It immediately elevated me to the status of one of the world's leading anthropologists.

When I realized, in 1978, that Lucy did represent a new species of human ancestor, and that I had an opportunity to name this new species, I realized this was a revolutionary step in understanding human origins.

When the first fossils began to be found in eastern Africa, in the late 1950s, I thought, what a wonderful marriage this was, biology and anthropology. I was around 16 years old when I made this particular choice of academic pursuit.

It's sad that the most glorious of sexual experiences can make us feel guilty, ashamed, embarrassed, and abnormal.

Sex is... perfectly natural. It's something that's pleasurable. It's enjoyable and it enhances a relationship. So why don't we learn as much as we can about it and become comfortable with ourselves as sexual human beings because we are all sexual?

If you can't laugh about sex, you shouldn't be doing it.

Americans are a decade behind Canada when it comes to sex education and understanding their bodies.

Much more quotes by Donald Johanson below the page.

As long as I'm having fun, I'm not quitting.

If you don't know about it, you can't get it.

They are uncomfortable talking about sex because they don't want people to think they know about it.

We teach teens what we think they ought to know, and we never tell them what they want to know.

Kids are all computer-savvy. Sit down and write to your parents on the computer. And just say, I have some questions and I'm scared. There's some stuff I don't know and I really need to talk to you about sex. Tear it off and put it on their pillow. They'll read it.