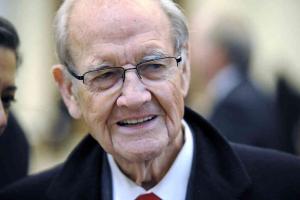 See the gallery for quotes by George McGovern. You can to use those 7 images of quotes as a desktop wallpapers. 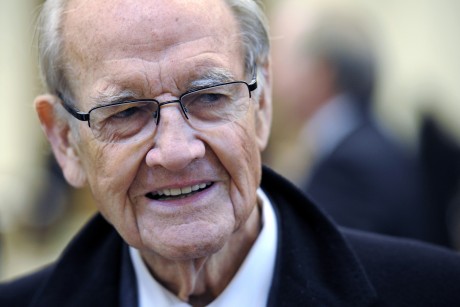 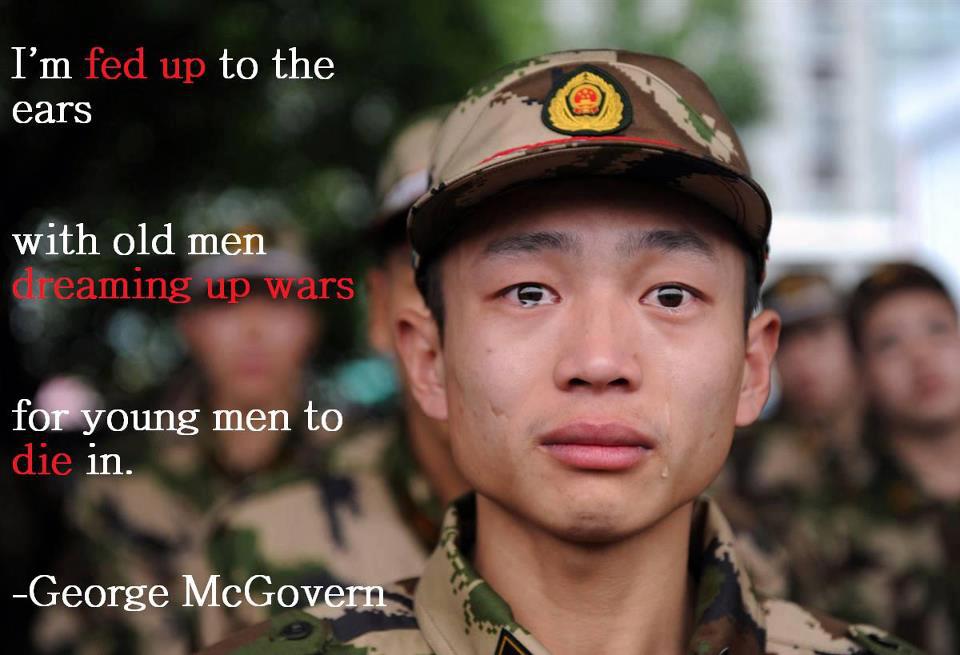 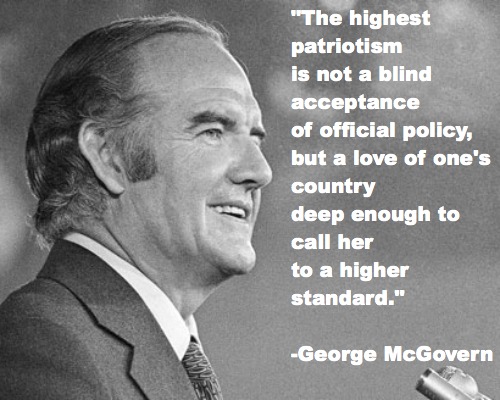 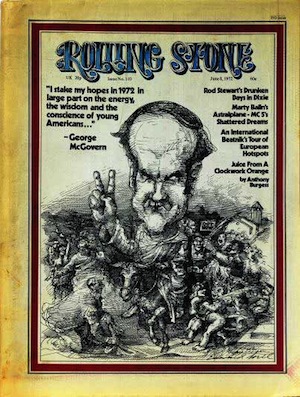 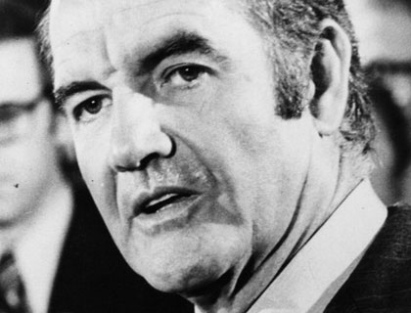 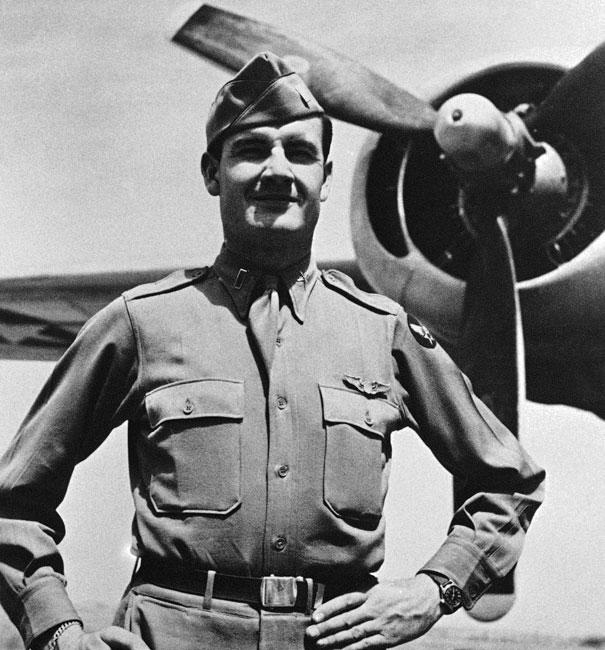 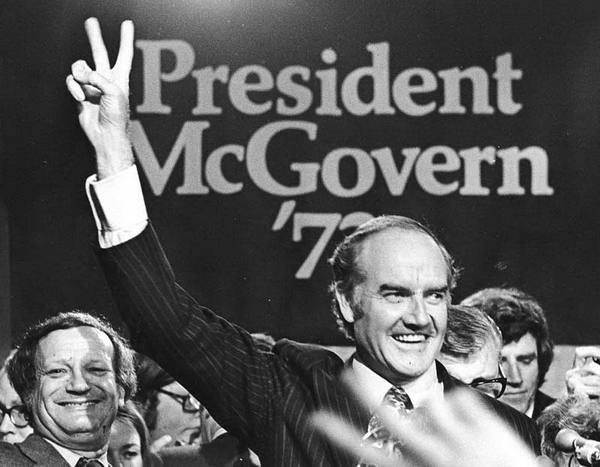 I always thought of myself as a good old South Dakota boy who grew up here on the prairie.

I am 1,000 percent for Tom Eagleton and I have no intention of dropping him from the ticket.

I am a liberal and always have been - just not the wild-eyed character the Republicans made me out to be.

I did frequently refer to my war record in World War II, but not in any flamboyant way.

I have a very deep concern about President Obama putting in another 21,000 troops into Afghanistan with the promise of more to come.

I have to have a passion in my life.

I hope I live long enough to see every hungry school child in the world being fed under the so-called McGovern-Dole program.

I met my wife in South Dakota.

I move ahead, I live.

I never even had the time to read novels.

I seek the presidency because I believe deeply in the American promise and can no longer accept the diminishing of that promise.

I seek to call America home to those principles that gave us birth.

I think it was my study of history that convinced me that the Democratic Party was more on the side of the average American.

I thought the Vietnam war was an utter, unmitigated disaster, so it was very hard for me to say anything good about it.

I was the guy who was constantly speaking out against the Vietnam War. I have no regrets about that.

I'm what a normal, healthy, ideal American should be like.

I've come to realize that protecting freedom of choice in our everyday lives is essential to maintaining a healthy civil society.

I've enjoyed myself 90 percent of the time.

If you're Iran's minister of defense, I think you'd try to develop at least one nuclear weapon to save yourself from what happened to Iraq.

It's a tough thing, to know what to do about a war that deep in your gut you feel is wrong and yet watch your peers going off to fight in that war.

It's nice not to have to worry about constituents.

My dad was a Methodist minister.

Much more quotes by George McGovern below the page.

My father was a clergyman and always said: 'Hate the sin but love the sinner.'

My heart does sometimes bleed for those who are hurting in my own country and abroad.

Now, I simply do what I want.

People didn't have the political guts to stand up against an American war.

Somehow politicians have become convinced that negative campaigning pays off in elections.

The longer the title, the less important the job.

Under the guise of protecting us from ourselves, the right and the left are becoming ever more aggressive in regulating behavior.

Well, we ought to be stirred, even to tears, by society's ills.

When I was in the war, I was lucky that I was in a plane and never saw the carnage close-up.

When I was small, my most serious handicap was a painful bashfulness in the presence of strangers.

You don't run for the presidency out of nostalgia.

The truth is that I oppose the Iraq war, just as I opposed the Vietnam War, because these two conflicts have weakened the U.S. and diminished our standing in the world and our national security.

Every once in a while, I run into somebody who tells me that she met her husband in my campaign or a husband who says, I met my wife. I have to tell you, I caused a few divorces too.

I flew a full string of 35 combat missions over some of the most heavily defended targets in Europe. We were hitting Hitler's oil refineries, his tank factories, his aircraft factories, his railway yards. Those were our prime targets.

I hope someday we will be able to proclaim that we have banished hunger in the United States, and that we've been able to bring nutrition and health to the whole world.

I suppose politicians have always wanted to get re-elected, but there's a kind of a feeling now that if you just discredit your opposition, it makes it easier for you to win. I don't think that's necessarily true.

I wish I had known more firsthand about the concerns and problems of American businesspeople while I was a U.S. senator and later a presidential nominee. That knowledge would have made me a better legislator and a more worthy aspirant to the White House.

When you start one of these programs, school lunch programs, in a country that heretofore had nothing of that kind, immediately school enrollment jumps dramatically. Girls and boys get to the classroom with the promise of a good meal once a day.

I'm fed up to the ears with old men dreaming up wars for young men to die in.

The highest patriotism is not a blind acceptance of official policy, but a love of one's country deep enough to call her to a higher plain.

Politics is an act of faith; you have to show some kind of confidence in the intellectual and moral capacity of the public.

Empathy is born out of the old biblical injunction 'Love the neighbor as thyself.'

I am fed up with a system which busts the pot smoker and lets the big dope racketeer go free.

You know, sometimes, when they say you're ahead of your time, it's just a polite way of saying you have a real bad sense of timing.

I was tired. I hadn't slept eight hours in two, three years. I lived on four, five hours of sleep. You can do it during a campaign because thousands are screaming for you. You're getting adrenaline shots each day. Then the campaign ends, and there are no more shots.

One of the sharp parallels is that neither Vietnam nor Iraq was the slightest threat to America's national security.

It really is true that an orator is simply a good man who speaks well.

Democrats believe that the federal government is not our enemy, it's our partner.

The Establishment center... has led us into the stupidest and cruelest war in all history. That war is a moral and political disaster - a terrible cancer eating away at the soul of our nation.

I make one pledge above all others - to seek and speak the truth with all the resources of mind and spirit I command.

I think the country's getting disgusted with Washington partly because of the decline of civility in government.

I would not plan to base my campaign primarily on opposition to the war in the Persian Gulf.

It is not patriotic to commit young Americans to war unless our national security clearly requires it.

The whole campaign was a tragic case of mistaken identity.

There is a strong tendency in the United States to rally round the flag and their troops, no matter how mistaken the war.

When I was a youngster growing up in South Dakota, we never referred to the national debt, it was always referred to as the war debt because it stemmed from World War I.

At least I have precluded the possibility of peaking too early.

Everyone is exposed to economic risks of some kind.

For 50 years, the Republicans have been accusing the Democrats of being soft on national security.