See the gallery for quotes by Ian Hart. You can to use those 5 images of quotes as a desktop wallpapers. 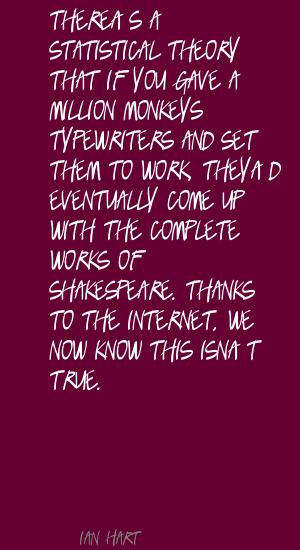 There's a statistical theory that if you gave a million monkeys typewriters and set them to work, they'd eventually come up with the complete works of Shakespeare. Thanks to the Internet, we now know this isn't true.

I need something to do when I'm not working, or I crawl up the walls. So I've just taken up kung fu. I was looking for some kind of calming, relaxing activity. I tried yoga, but it wasn't really me.

I just wanna build momentum again. Keeping yourself in work is one thing, keeping yourself in good work's another. But if it doesn't work out, so be it. As the Taoists say, Learn to accept that which you cannot change.

Everyone should be good at what they do.

I hate auditions - when I'm doing them, I can't wait to get out the bleeding door.

I just want to be rich and famous.

I was relatively technically adept. I can edit and wire up a light.

I'm belligerent rather than ambitious.

I've only used my own voice about four times on film.

Not being able to work would make me very unhappy.

That's what I like about Neil Jordan's films: everyone is better at what they do than you are.

We tend to think about fascism in terms of the Second World War.

Well, put it like this, if you're not a kid, you're a wizard.

When you get to 15 and most of your teachers are priests, there's bound to be a conflict.

Even before my audition, there were several pages missing from my script because those bits were so unbelievably secret not even I was allowed to see them.

Much more quotes by Ian Hart below the page.

I don't know how to construct a career that'll make me famous. Except maybe get my ears pinned back, get my teeth done, and go to America. But then I'll be competing with billions of actors who haven't got false teeth, and who are 25.

I'm still working, I've got two arms, two legs, two gorgeous kids, a lovely wife. Fifteen years ago, I was homeless. So when you think about it, I'm lucky.

It's not any desire on my part to start playing dads, but it's a convention of drama. If you don't get the parts of young people going out to nightclubs, you have to play their fathers.

Most good roles are written for young men. We are fixated on youth. So however much people say there is nothing wrong with being bald, the reality is once the hair is gone, you might not get the parts.

My philosophy was, if I just do good work, someone will like it enough to employ me. It never made me famous. And I'm way, way too old now, mate. That boat's sailed.

There is an eternal landscape, a geography of the soul; we search for its outlines all our lives.

We are here to add to the sum of human goodness. To prove the thing exists.