See the gallery for quotes by James Payn. You can to use those 8 images of quotes as a desktop wallpapers. 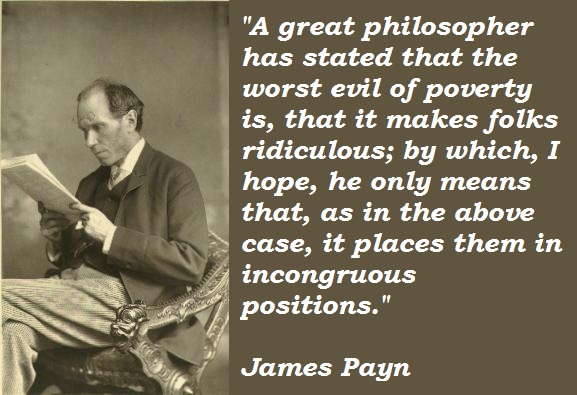 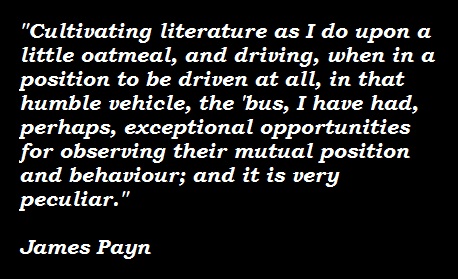 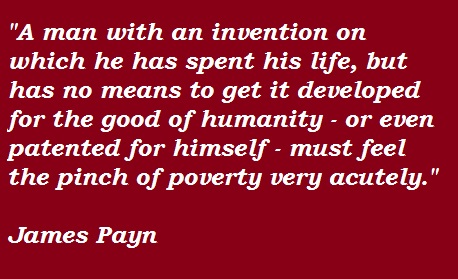 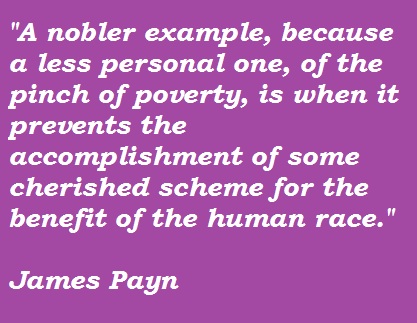 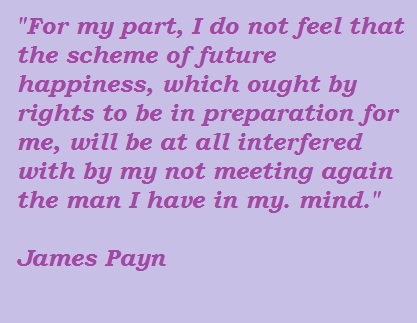 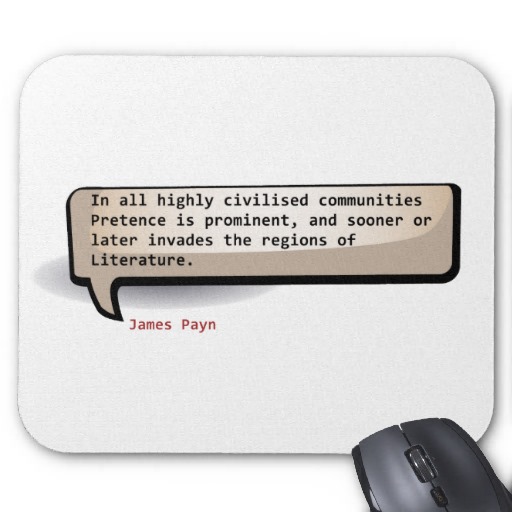 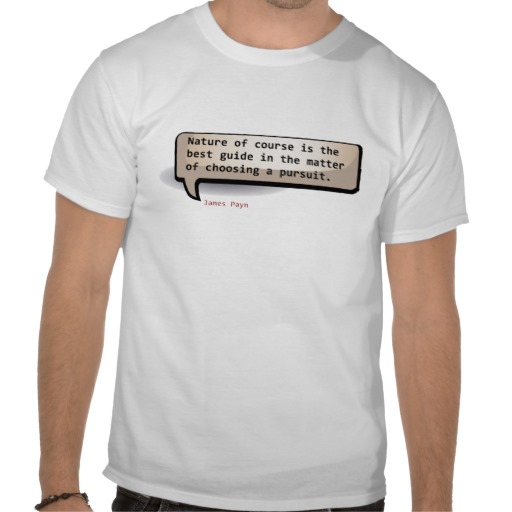 Cultivating literature as I do upon a little oatmeal, and driving, when in a position to be driven at all, in that humble vehicle, the 'bus, I have had, perhaps, exceptional opportunities for observing their mutual position and behaviour; and it is very peculiar.

And what holds good of verse holds infinitely better in respect to prose.

For my part, I do not much believe in the predilections of boyhood.

In all highly civilised communities Pretence is prominent, and sooner or later invades the regions of Literature.

Nature of course is the best guide in the matter of choosing a pursuit.

Nor, in our own country, must we fail to take notice of the establishment of School Boards.

A great philosopher has stated that the worst evil of poverty is, that it makes folks ridiculous; by which, I hope, he only means that, as in the above case, it places them in incongruous positions.

A man with an invention on which he has spent his life, but has no means to get it developed for the good of humanity - or even patented for himself - must feel the pinch of poverty very acutely.

A nobler example, because a less personal one, of the pinch of poverty, is when it prevents the accomplishment of some cherished scheme for the benefit of the human race.

As a rule, anyone who can tell a good story can write one, so there really need be no mistake about his qualification; such a man will be careful not to be wearisome, and to keep his point, or his catastrophe, well in hand.

For my part, I do not feel that the scheme of future happiness, which ought by rights to be in preparation for me, will be at all interfered with by my not meeting again the man I have in my. mind.

How large and varied is the educational bill of fare set before every young gentleman in Great Britain; and to judge by the mental stamina it affords him in most cases, what a waste of good food it is!

It has often struck me that the relation of two important members of the social body to one another has never been sufficiently considered, or treated of, so far as I know, either by the philosopher or the poet.

It is better, however, for his own reputation that the story-teller should risk a few actions for libel on account of these unfortunate coincidences than that he should adopt the melancholy device of using blanks or asterisks.

It is certain, indeed, that the sacred writers were apt to make great allowances for people with empty stomachs, and though I am well aware that the present profane ones think this very reprehensible, I venture to agree with the sacred writers.

It is quite extraordinary how very various are the opinions entertained on this point, and, before sifting them, one must be careful in the first place to eliminate from our inquiry the cases of that considerable class of persons who pinch themselves.

One would think that in writing about literary men and matters there would be no difficulty in finding a title for one's essay, or that any embarrassment which might arise would be from excess of material. I find this, however, far from being the case.

Some Critics on the Hearth are not only good-natured, but have rather too high, or, if that is impossible, let us say too pronounced, an opinion of the abilities of their literary friends.

The fact is, if a young man is naturally indolent, the spur of necessity will drive him but a very little way, while the having enough to live upon is often the means of preserving his self-respect.

The idea of bringing young people up to Literature is doubtless calculated to raise the eyebrows almost as much as the suggestion of bringing them up to the Stage.

There are, it is true, at present no great prizes in literature such as are offered by the learned professions, but there are quite as many small ones - competences; while, on the other hand, it is not so much of a lottery.

To the truly benevolent mind, indeed, nothing is more satisfactory than to hear of a miser denying himself the necessaries of life a little too far and ridding us of his presence altogether.