See the gallery for quotes by Jerry Pournelle. You can to use those 8 images of quotes as a desktop wallpapers. 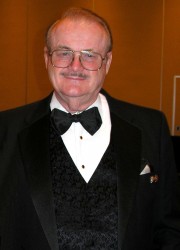 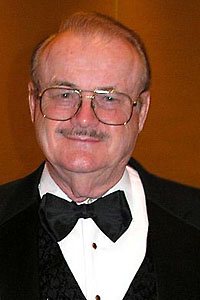 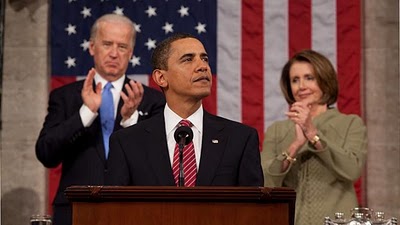 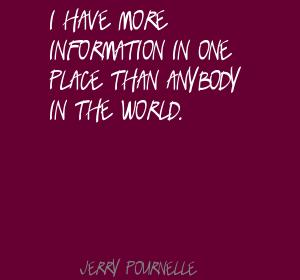 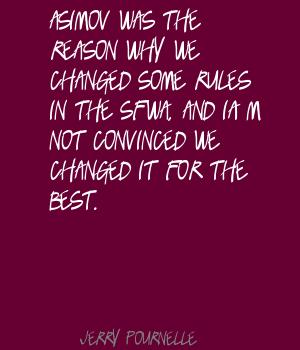 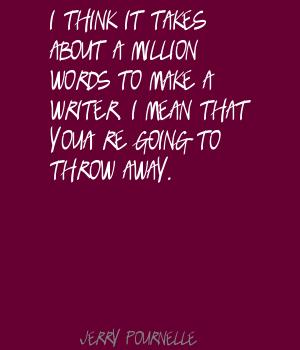 Asimov was the reason why we changed some rules in the SFWA, and I'm not convinced we changed it for the best.

I have more information in one place than anybody in the world.

I think it takes about a million words to make a writer. I mean that you're going to throw away.

In any ethical situation, the thing you want least to do is probably the right action.

The importance of information is directly proportional to its improbability.

To doubt everything or to believe everything are two equally convenient solutions; both dispense with the necessity of reflection.

And in down times it shakes a lot of the bad SF out, a lot the stuff that was bought for literary reasons, which is neither entertaining nor great literature.

And meanwhile, the storytellers like me and Anderson, Silverberg... we tell stories. People like them. They want to know how it comes out, they want to know what the ending is.

And that's another piece of advice I'll give junior writers; when you get to the point where they take you to lunch, let the editor suggest where to go.

Tags: Advice, Another, Give

Because Tom Doherty and people like that are not stupid. If they could have streamlined their operation more to get more money out of it, they would have done it. It's not like they're a bunch of idiots.

Heinlein never had a best-seller. Even, I think, with Stranger in a Strange Land, I don't think it was actually on the New York Times best seller list.

I started in this racket in the early '70s, and when I was president of the Science Fiction Writers of America, of which I was like the sixth president, I was the first one nobody ever heard of.

One the other hand, the publishing trend is ghastly, isn't it? Two hundred and something distributors are now down to 10 or 12? And what's the recruiting drive?

So, I guess the answer to your question is very few people can bring off a novel of the future because it's just so damn hard to make it look like the future.

Somebody's always getting me to come lecture to their writing class, and I don't talk about writing at all, I talk about the business of making a living at this racket.

The Aztecs believe they started up in what's now New Mexico, and wandered for 10,000 years before they got down into where they are now, in Mexico City. That's a weird legend.

There were probably, what, 300 science-fiction members in the SFWA, of whom probably a hundred were active members in the sense that they were selling something every year, or every couple years.

We do a hard fantasy as well as hard science fiction, and I think I probably single-handedly recreated military science fiction. It was dead before I started working in it.

We're basically after Joe's beer money, and Joe likes his beer, so you better make sure that what you give him is at least as pleasurable to him as having his six-pack of beer would be.

Tags: Give, Him, Money

Write a lot. And finish what you write. Don't join writer's clubs and go sit around having coffee reading pieces of your manuscript to people. Write it. Finish it. I set those rules up years ago, and nothing's changed.

You no longer have much in the way of knowing what to do in a big, epic novel about the future, because nobody knows what the hell is going to happen.

You see, I used to do a certain amount of market research by going to the local drugstore and seeing what the truck drivers would put up. Now it's all just copies from the latest best-seller list and damn little of anything else.