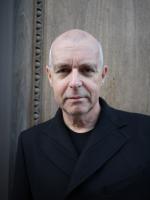 See the gallery for quotes by Neil Tennant. You can to use those 7 images of quotes as a desktop wallpapers. 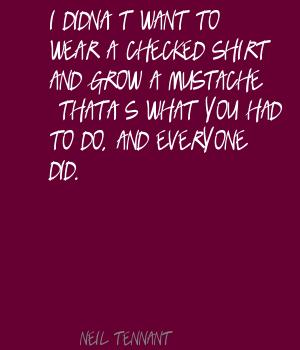 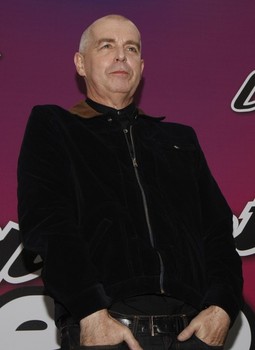 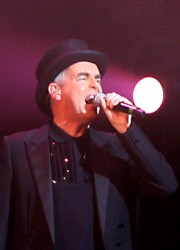 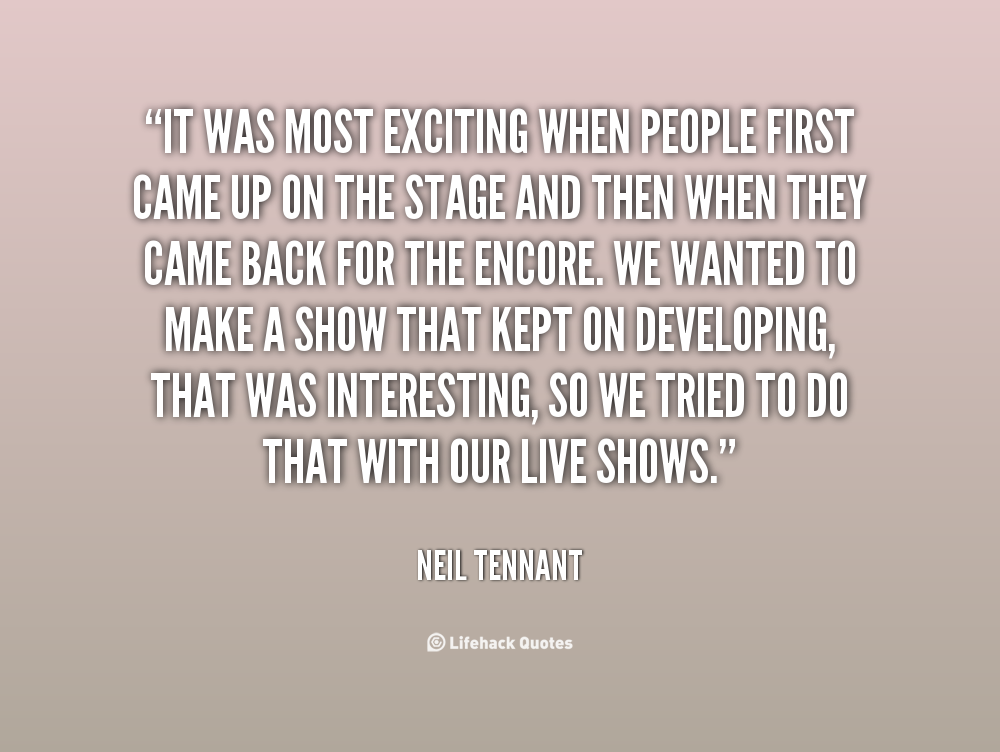 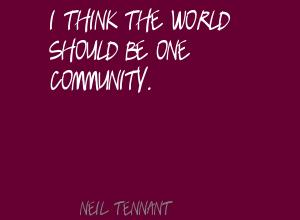 When we did concerts, we wanted them to be theatrical events - collaborations with designers, choreographers, and directors - because we thought traditional rock concerts were boring.

I think the world should be one community.

I didn't want to wear a checked shirt and grow a mustache - that's what you had to do, and everyone did.

We've been working on a new album, which is going to come out next spring, which is very different, a change of style for us - it's going to be almost like rock music.

I think there's an element where people get very comfortable in their ghetto. Which is fair enough.

I think we've come a long way since then. The big thing that changed was when ecstasy came along in Britain.

Tags: Along, Big, Since

She's a very charismatic character, and she holds the whole play together.

Since we started, Chris and I had theatrical ambitions.

The big gay clubs like Heaven started having mixed nights in the late '80s.

We decided we didn't want to do a musical for TV because the idea of writing a musical that would be seen on television once seems insane.

We thought it would be great to see if you could put pop music back into musical theater.

A lot of what used to be known as gay culture - broadly speaking, homoeroticism and being camp - has been brought into mainstream culture. I think we should be moving to an era where it's just sex.

At one time musical theater, particularly in the '40s and '50s, was a big source of pop songs. That's how musical theater started, really - it was just a way of linking several pop songs for the stage.

Because some people have sex with people of the same sex, an entire culture has been created, broadly speaking, out of oppression. Which in a rational world would not be an issue.

For a while we were chasing a book by Graham Greene to do Brighton Rock as a musical. We didn't get the rights, so we decided to create something from scratch, with Jonathan. By that time we were big fans of his work.

He comes to London and gets a job in a nightclub, a gay club, where he's known as Straight Dave by the bar staff - and no one believes he's as straight as he claims to be. He meets the daughter of the club manager, and he has an affair with her.

I'm always uneasy with messages. I think if there is a message, it's about taking control of your life. Not becoming a victim. Be true to yourself. In essence it's about love in the drug culture.

It was most exciting when people first came up on the stage and then when they came back for the encore. We wanted to make a show that kept on developing, that was interesting, so we tried to do that with our live shows.

She's been a smack addict, she's had big success in Europe in the '70s, and she's lost everything. She's been rediscovered in the '80s, and as we meet her she's just about to sign a new recording contract.

The first song is called 'London.' It's about two Russian soldiers who desert the Russian army and escape to London, where they indulge in a life of crime.

There's also a subplot about a guy who manages pop groups. Dave is a very ambitious boy, and he gets offered an audition but only wants to do it on his terms and conditions. He wants to maintain his integrity.

They've pursued their own agendas, and they've done what they've wanted to do and not pursued traditional careers in the music industry. They've followed their own instincts, and they are in many ways maverick performers.

To a certain extent, this tour is a celebration of individuality and that you can invent and reinvent yourself. You should have the power to be able to do that. Sexuality is a part of that. It should release you. It doesn't have to be an issue. It shouldn't box you in.

Much more quotes by Neil Tennant below the page.

We hope we are moving toward a world where sexual orientation is not an issue, because we hate the idea of a gay ghetto. I think that it's a real shame that people become restricted by their sexuality or define their whole lives by their sexuality.

We shouldn't feel restricted by our sexuality, and our sexuality doesn't have to be a cultural choice. That's an amazing variety of music within those five main performers.