See the gallery for quotes by Alan Kay. You can to use those 7 images of quotes as a desktop wallpapers. 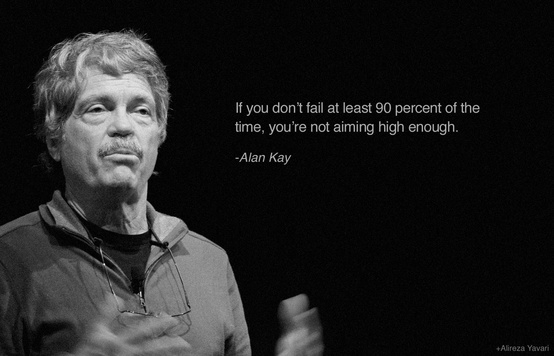 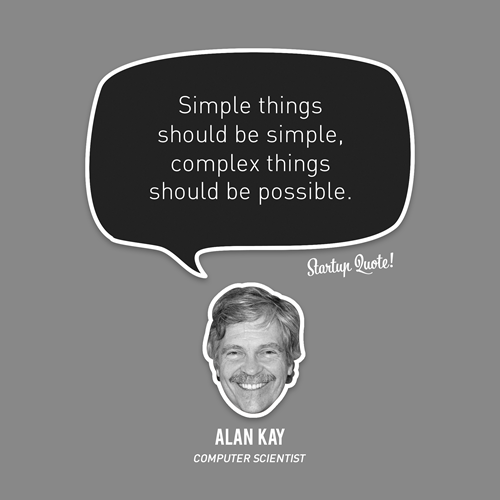 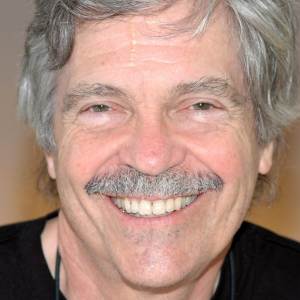 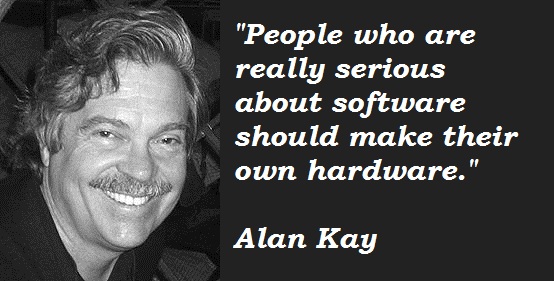 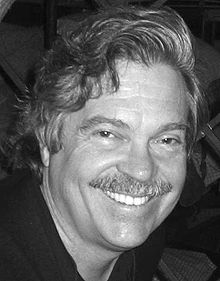 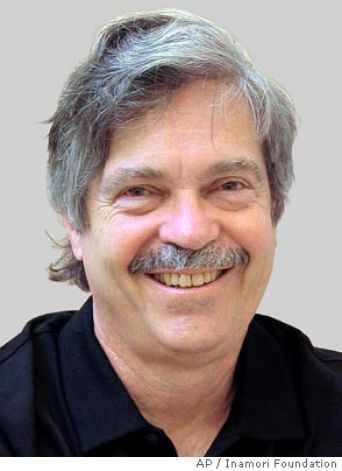 The best way to predict the future is to invent it.

People who are really serious about software should make their own hardware.

Perspective is worth 80 IQ points.

If you don't fail at least 90 percent of the time, you're not aiming high enough.

Context is worth 80 IQ points.

Quite a few people have to believe something is normal before it becomes normal - a sort of 'voting' situation. But once the threshold is reached, then everyone demands to do whatever it is.

Tags: Everyone, Voting, Whatever

Technology is anything that wasn't around when you were born.

The protean nature of the computer is such that it can act like a machine or like a language to be shaped and exploited.

Some people worry that artificial intelligence will make us feel inferior, but then, anybody in his right mind should have an inferiority complex every time he looks at a flower.

Most software today is very much like an Egyptian pyramid with millions of bricks piled on top of each other, with no structural integrity, but just done by brute force and thousands of slaves.

The result is - document destruction - we're really not going to be able to prove beyond a truth the negatives and some of the positive conclusions that we're going to come to. There will be always unresolved ambiguity here.

There's a long record here of being wrong. There's a good reason for it. There are probably multiple reasons. Certainly proliferation is a hard thing to track, particularly in countries that deny easy and free access and don't have free and open societies.

This hearing came about very quickly. I do have a few preliminary comments, but I suspect you're more interested in asking questions, and I'll be happy to respond to those questions to the best of my ability.

A great deal has been accomplished by the team, and I do think it important that it goes on and it is allowed to reach its full conclusion. In fact, I really believe it ought to be better resourced and totally focused on WMD; that that is important to do it.

The Germans certainly - the intelligence service believed that there were WMD. It turns out that we were all wrong, probably in my judgment, and that is most disturbing.

I've seen looting around the world and thought I knew the best looters in the world. The Iraqis excel at that.

Let me begin by saying, we were almost all wrong, and I certainly include myself here.

The Libyan program recently discovered was far more extensive than was assessed prior to that.

And let me take one of the explanations most commonly given: Analysts were pressured to reach conclusions that would fit the political agenda of one or another administration. I deeply think that is a wrong explanation.

And like I say, I think we've got other cases other than Iraq. I do not think the problem of global proliferation of weapons technology of mass destruction is going to go away, and that's why I think it is an urgent issue.

And never - not in a single case - was the explanation, 'I was pressured to do this.' The explanation was very often, 'The limited data we had led one to reasonably conclude this. I now see that there's another explanation for it.'

And you know, almost in a perverse way, I wish it had been undue influence because we know how to correct that. We get rid of the people who, in fact, were exercising that.

Much more quotes by Alan Kay below the page.

As leader of the effort of the Iraqi Survey Group, I spent most of my days not out in the field leading inspections. It's typically what you do at that level. I was trying to motivate, direct, find strategies.

But I do think the survey group - and I think Charlie Duelfer is a great leader. I have the utmost confidence in Charles. I think you will get as full an answer as you can possibly get.

But the most important thing about that story, which is not often told, is that as a result after the Cuban missile crisis, immediate steps were taken to correct our inability to collect on the movement of nuclear material out of the Soviet Union to other places.

Fortunately, President Kennedy and Robert Kennedy disagreed with the estimate and chose a course of action less ambitious and aggressive than recommended by their advisers.

I also believe that it is time to begin the fundamental analysis of how we got here, what led us here and what we need to do in order to ensure that we are equipped with the best possible intelligence as we face these issues in the future.

I came not from within the administration, and it was clear and clear in our discussions and no one asked otherwise that I would lead this the way I thought best and I would speak the truth as we found it.

I do believe we have to understand why reality turned out to be different than expectations and estimates. But you have more public service - certainly many of you - than I have ever had, and you recognize that this is not unusual.

I think that shows a level of maturity and understanding that I think bodes well for getting to the bottom of this. But it is really up to you and your staff, on behalf of the American people, to take on that challenge.

I think the aim - and certainly the aim of what I've tried to do since leaving - is not political and certainly not a witch hunt at individuals. It's to try to direct our attention at what I believe is a fundamental fault analysis that we must now examine.

I would also point out that many governments that chose not to support this war - certainly, the French president, Jacques Chirac, as I recall in April of last year, referred to Iraq's possession of WMD.

In my judgment, based on the work that has been done to this point of the Iraq Survey Group, and in fact, that I reported to you in October, Iraq was in clear violation of the terms of U.N.Resolution 1441.

Sen. Edward Kennedy knows very directly. Senator Kennedy and I talked on several occasions prior to the war that my view was that the best evidence that I had seen was that Iraq indeed had weapons of mass destruction.

The case of Iran, a nuclear program that the Iranians admit was 18 years on, that we underestimated. And, in fact, we didn't discover it. It was discovered by a group of Iranian dissidents outside the country who pointed the international community at the location.

The fact that it wasn't tells me that we've got a much more fundamental problem of understanding what went wrong, and we've got to figure out what was there. And that's what I call fundamental fault analysis.