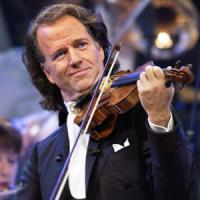 See the gallery for quotes by Andre Rieu. You can to use those 7 images of quotes as a desktop wallpapers. 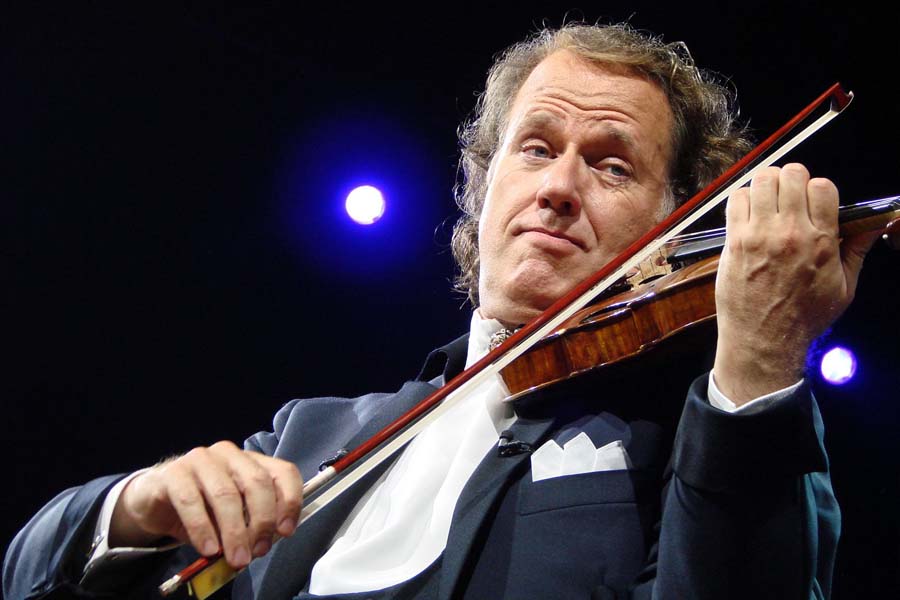 I think there are people who use classical music to say, 'I am better than you, because I know all the rules and you don't.' You're not allowed to have fun or entertain.

I was so busy with my studies that I didn't have a musical idol as a teenager. Later, around my 20s, I suddenly discovered the Beatles and the Rolling Stones but I guess my musical idol has always been Strauss.

The waltz can be sad and at the same time uplifting. You have to see life from both sides, and the waltz encapsulates that. If you're in my audience you give yourself to me and the waltz will grab you.

When my twin grandchildren, Linda and Lyeke, were born two years ago, it changed me. I felt it was the essence of what life is about, and I cried all day. When my son Pierre, their father, was born I didn't cry like that.

Where would I be without Johann Strauss's beautiful 'Blue Danube?' Without this piece of music I wouldn't be the man I am today. It's a tune that brings out the emotion in everyone and makes them want to waltz.

I was the black sheep of the family, and my mother never really understood me.

I am travelling half the year around the world, every year, so coming home is one of the most beautiful things.

We should make decisions in life with our hearts, not our brains, not only in music but in daily life.

Critics or musicians who attack me are jealous of my success and the fact that I make people feel so happy.

For me, I always like to get up bright and early.

I admire Johann Strauss a lot. I believe he was a genius of his time.

I am a showman in the traditional sense, but modern, too. I like to use sets and lighting to create magic.

I first picked up a violin aged five - I just assumed everyone played.

I have 120 people in my payroll without any government giving me any money. We live off the tickets and the records I sell. That is very unusual.

I have two speeds, nothing and full pelt.

I know that when I like music, when it touches my heart, that it will touch your heart, too. That, I think, is the secret to my success.

I love reading but I never last very long because I fall asleep right away.

I was a fat child and loved cake, perhaps because it was the only sweet thing in my life.

It doesn't matter as long as there's interaction between me and the audience. That's why they come.

Tags: Between, Matter, Why

It is a real piece of art if you can make a waltz sound like it is the easiest piece of music to play, because it's really not.

Much more quotes by Andre Rieu below the page.

It is my personality alone that has brought back the waltz and made it a global craze.

Mozart composed his music not for the elite, but for everybody.

Now, I've changed my life to make sure I work only on what I love.

Other people might want a Ferrari, but I wanted a butterfly house. I built it together with a blacksmith. We designed it together.

The classical music world is so snobbish.

When I was 4 or 5, I attended my father's concerts. He very often played Strauss waltzes as encores and I saw something happening with the audience.

When I'm not on tour, I love to have a long breakfast at home in my garden.

You go to a pop concert or a classical concert but there's nothing in between.

The public should know that the liability issues here have yet to be resolved, or even raised. If you're a farmer and you're growing a genetically engineering food crop, those genes are going to flow to the other farm.

They're now turning those seeds into intellectual property, so they have a virtual lock on the seeds upon which we all depend for our food and survival.

We are already producing enough food to feed the world. We already have technology in place that allows us to produce more than we can find a market for.

We are entering a new phase in human history - one in which fewer and fewer workers will be needed to produce the goods and services for the global population.

We now have an opportunity, though, to do something we didn't do in the industrial age, and that is to get a leg up on this, to bring the public in quickly, to have an informed debate.

What I'm suggesting to you is that this could be a renaissance. We may be on the cusp of a future which could provide a tremendous leap forward for humanity.

What the public needs to understand is that these new technologies, especially in recombinant DNA technology, allow scientists to bypass biological boundaries altogether.

What's different here is that we have now technologies that allow these life science companies to bypass classical breeding. That's what makes it both powerful and exciting.

Many of the genetically modified foods will be safe, I'm sure. Will most of them be safe? Nobody knows.

Tags: Knows, Nobody, Sure

When we seed millions of acres of land with these plants, what happens to foraging birds, to insects, to microbes, to the other animals, when they come in contact and digest plants that are producing materials ranging from plastics to vaccines to pharmaceutical products?

Back in 1983, the United States government approved the release of the first genetically modified organism. In this case, it was a bacteria that prevents frost on food crops.

Europe will not accept genetically modified foods. It doesn't make any difference in the final analysis what Brussels does, what Washington does, or what the World Trade Organization does.

It may be that everything the life science companies are telling us will turn out to be right, and there's no problem here whatsoever. That defies logic.

The 10 largest antitrust law firms in the United States have gone into the federal courts charging Monsanto with creating a global conspiracy in violation of the antitrust laws, to control the global market in seeds.

The electronic media introduced this idea to the larger audience very, very quickly. We spent years and years and years meeting with activists all over Europe to lay the groundwork for a political response, as we did here.

The interesting thing is, while we die of diseases of affluence from eating all these fatty meats, our poor brethren in the developing world die of diseases of poverty, because the land is not used now to grow food grain for their families.

Here we are 17 years later. Those agencies never did come through.

One thing I've learned over these last 30 or 40 years is that people make history. There's no fait accompli to any of this.

So my attorneys brought litigation in the U.S. federal courts. The judge ruled in our favor.

The industry's not stupid. The industry knows that if those foods are labeled 'genetically engineered,' the public will shy away and won't take them.

We were making the first step out of the age of chemistry and physics, and into the age of biology.

You can eliminate, for example, a Brazil nut gene if you know that it will create an allergenic effect.

A refuge is supposed to prevent what? The genes from flowing out of sight? This refuge idea won't stop insects from moving across boundaries. That's absurd.

Back in the mid-1980s, congressional hearings were held after we brought this litigation, and held up the first experiment. At that time, I went in front of Congress, along with the major agencies involved with this.

I know quite a few farmers all over the United States who have tried this and have said the opposite, that they have to use more herbicides, not less. The same holds true with BT.

If your corn has a herbicide-tolerant gene, it means you can spray your herbicides and kill the weeds; you won't kill your corn because it's producing a gene that makes it tolerant of the herbicide.

In this country, the health concerns and the environmental concerns are as deep as in Europe. All the surveys show that. But here, we didn't have the cultural dimension. This is a fast-food culture.

The American public is not aware that there might be potential allergenic and toxic reactions. With regular food, at least people know which foods they have an allergy to.

The insurance companies aren't covering that. Should Monsanto be liable for these losses? Should the state government? Who's going to cover the losses? The fact is, here's an industry with no long-term liability in place.

The position I took at the time was that we hadn't really examined any of the potential environmental consequences of introducing genetically modified organisms.