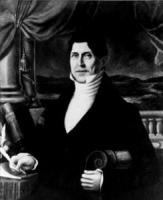 See the gallery for quotes by Augustus Baldwin Longstreet. You can to use those 7 images of quotes as a desktop wallpapers. 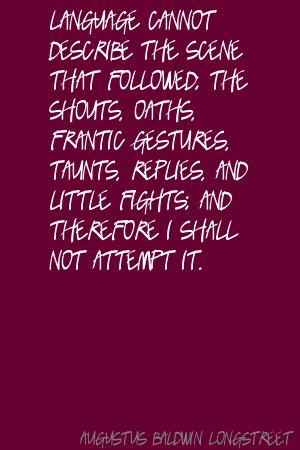 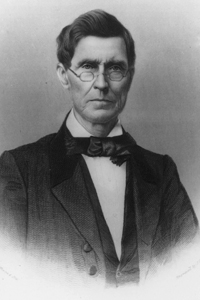 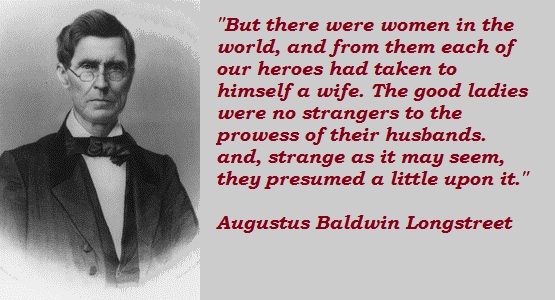 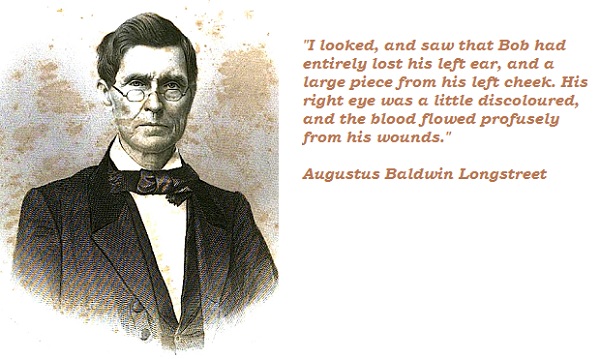 But there were women in the world, and from them each of our heroes had taken to himself a wife. The good ladies were no strangers to the prowess of their husbands. and, strange as it may seem, they presumed a little upon it.

All the knowing ones were consulted as to the issue, and they all agreed, to a man, in one of two opinions: either that Bob would flog Billy, or Billy would flog Bob.

During the session of the Supreme Court, in the village of -, about three weeks ago, when a number of people were collected in the principal street of the village, I observed a young man riding up and down the street, as I supposed, in a violent passion.

He was a horse of goodly countenance, rather expressive of vigilance than fire; though an unnatural appearance of fierceness was thrown into it by the loss of his ears, which had been cropped pretty close to his head.

I looked, and saw that Bob had entirely lost his left ear, and a large piece from his left cheek. His right eye was a little discoloured, and the blood flowed profusely from his wounds.

In the younger days of the Republic there lived in the county of - two men, who were admitted on all hands to be the very best men In the county; which, in the Georgia vocabulary, means they could flog any other two men in the county.

It is said that a hundred gamecocks will live in perfect harmony together it you do not put a hen with them; and so it would have been with Billy and Bob, had there been no women in the world.

Language cannot describe the scene that followed; the shouts, oaths, frantic gestures, taunts, replies, and little fights; and therefore I shall not attempt it.

Ned made a tremendous rattling, at which Bullet took fright, broke his bridle, and dashed off in grand style; and would have stopped all farther negotiations by going home in disgust, had not a traveller arrested him and brought him back; but Kit did not move.

Tags: Him, Home, Off

The former measured six feet and an inch in his stockings, and, without a single pound of cumbrous flesh about him, weighed a hundred and eighty. The latter was an inch shorter than his rival, and ten pounds lighter; but he was much the most active of the two.

There's no sort o' mistake in little Bullet. He can pick up miles on his feet, and fling 'em behind him as fast as the next man's hoss, I don't care where he comes from. And he can keep at it as long as the sun can shine without resting. 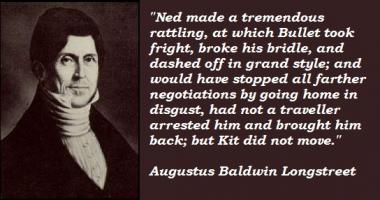 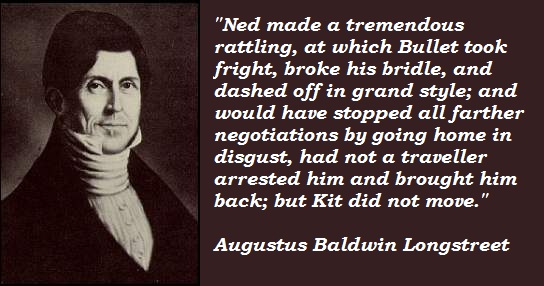