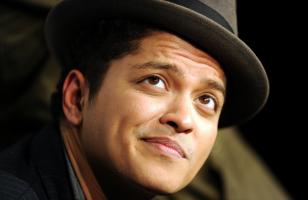 See the gallery for quotes by Bruno Mars. You can to use those 8 images of quotes as a desktop wallpapers. 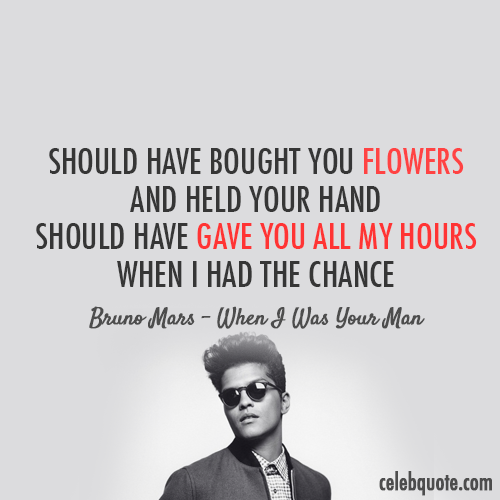 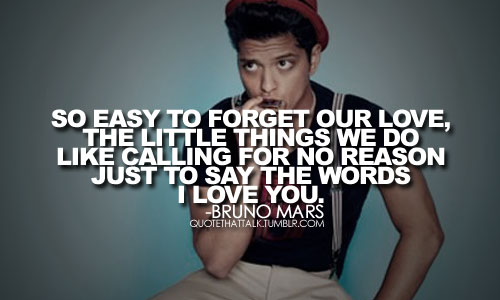 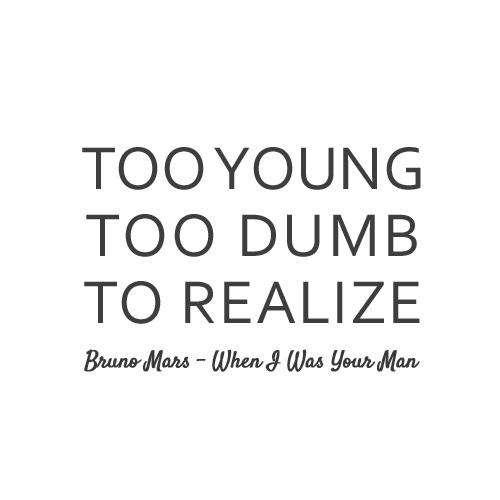 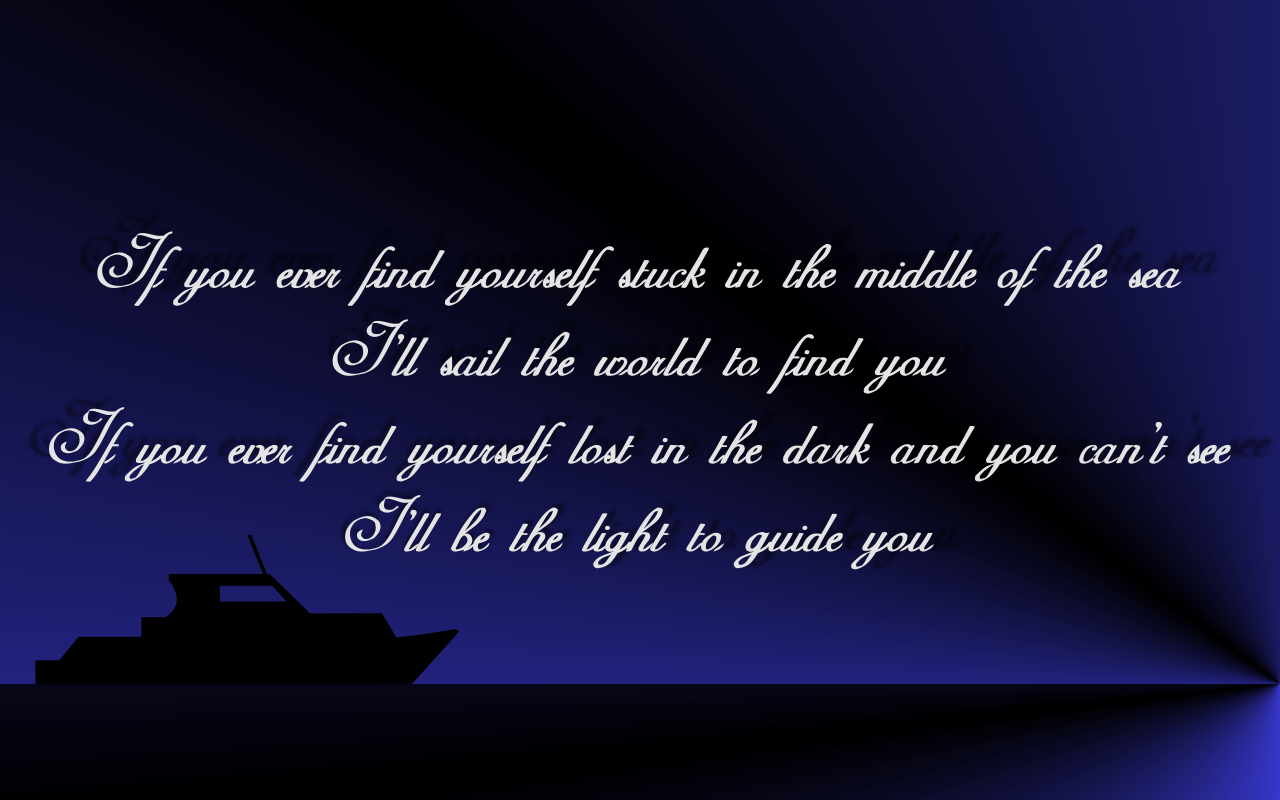 I really wish I knew what I was doing because I'd be writing hit songs every minute.

I tend to overthink things. I'm not the guy who screams 'This is a world smash!' when I finish a song.

I think I don't take myself too seriously. You know as far as, it's a fun life. I take my music serious, but I like to have fun.

I think that success is having fun.

I wish I could tell you me and my rock band were traveling around, strung out. No, we were a family band. Straight Partridge Family.

I'm the Nickelodeon version of DangerMouse.

I've definitely seen bands before they made money kind of change their thing on the next tour, and I prefer it when it's a little more raw.

If I was a billionaire, I'd be smart with my money.

My demo was terrible, I sounded like a chipmunk. I was so young.

No one sells a song better than the person that wrote it.

There are no record companies in Waikiki.

What I'm hoping is that every album I'm going to do will give my audience something different, and that they'll grow as I do.

Writing for other artists helped me figure out that magic you have to capture to make everyone connect with a song.

You know, my sister sings, my brother plays drums in my band. My whole family is a bunch of musicians.

A grown man should always carry cash, right? I don't know who told me, but someone told me that a long time ago, and the biggest turnoff is when a guy doesn't have cash on him.

Tags: Him, Someone, Time

I came to California and got signed at a young age. And it's not like you see in the movies, where you start rubbing shoulders with Timbaland and Pharrell, and you become a giant pop star.

I don't ever want to come out with something safe and get away with, 'It sounds good!' It's got to be more than sounding good. The music I like are events.

I don't think anyone ever plans to change line-ups, but it's something that comes with being in bands. I was in a band once and there were always problems - members come and go - and some of the world's biggest bands have changed line-ups loads!

I love that I can talk to my fans through Twitter, to cut out the middle man. Because I've done interviews where my words have gotten twisted, so it's nice to be able to have things coming straight from me.

I've had big record label presidents look me in the face and say, 'Your music sucks, you don't know who you are, your music is all over the place, and we don't know how to market this stuff. Pick a lane and come back to us.'

In my songs, I'm not saying something that's never been said before. The have lyrics aren't going to blow people away. It's the emotion and the melody that drive it home.

My dad was into the 1950s doo-wop era. If you look at those groups, or at James Brown, Jackie Wilson and the Temptations in the 1960s, you'll see you had to be sharp onstage.

My father moved to Hawaii from Brooklyn and my mother came there as a child from the Philippines. They met at a show where my dad was playing percussion. My mom was a hula dancer.

Much more quotes by Bruno Mars below the page.

'Nothin' on You' by B.o.B was the first song where I heard myself on the radio. I'd been trying my whole career to write a song like that, which incorporates live instruments with hip-hop and singing.

Someone told me something that stuck with me: 'You have to envision your life, and then go backwards.' I've been living by that motto for a while, so I see where I need to be. Now I'm just backtracking and trying to get back up there.

Songwriters, you have to work - you have to wait for residuals. You have to pray that the song's going to be a hit. And then a year later, you might get a check.

You know, when Michael Jackson does the moonwalk, he's showing off! When Prince or Hendrix do a guitar solo, it's confidence! I would hate to be at a show and some nervous wreck is sweating up there and doesn't feel like he deserves to be there.

You pick up some fans and a handful of haters along the way.

There's always a bittersweet kind of thing, but I feel like everything had to work out the way it is. Everything that had to happen, happened.

It's probably the worst feeling in the world, when you're deeply and madly in love with a woman and you know she's not feeling you the same way, and you don't know why.

Doo-wop is special music to me because it's so straightforward and melody-driven and captures emotions.

Music is not math. It's science. You keep mixing the stuff up until it blows up on you, or it becomes this incredible potion.

I've learned people are watching, so don't do nothing stupid.

You can't knock on opportunity's door and not be ready.

I guess if I'm a product, either you're chocolate, you're vanilla or you're butterscotch. You can't be all three.

Becoming famous was never what I wanted to do. There's a lot of things that come with fame - it's what people in the limelight have to do.

Don't you love it that Prince doesn't use Twitter? Don't you think he's somewhere on a unicorn?

Everyone calls me Bruno; they don't ever call me Peter - that was just my government name.

Hawaii is paradise. It sounds cheesy to say it, but there's music in the air there.

Hawaiian music is beautiful and simple.

Honolulu is a melting pot.

I always say I wanna work with Alicia Keys. I'm in awe of her.

I could sing you a thousand and one doo-wop songs. I love the simplicity in that music. It's not super-poetic, it's just from the heart.

I definitely don't plead guilty to being a heartthrob.

I don't try and be dark, but there are obviously darker emotions that I want to capture sometimes.

I grew up listening to the Police, I grew up performing in bars, singing Police songs.

I just know that I'm a fan of all different kinds of genres. You're supposed to be free doing music, and that's how I feel.

I just write songs that I strongly believe in and that are coming from inside. There's no tricks. It's honesty with big melodies.

I love artists like Prince, who hold on to that element of mystery.

I love the Sex Pistols. I'm a big Beach Boys fan and a huge Zeppelin and Queen fan.