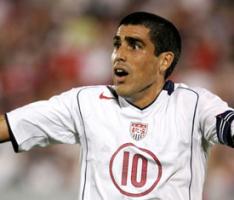 See the gallery for quotes by Claudio Reyna. You can to use those 6 images of quotes as a desktop wallpapers. 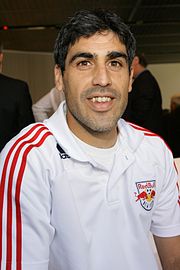 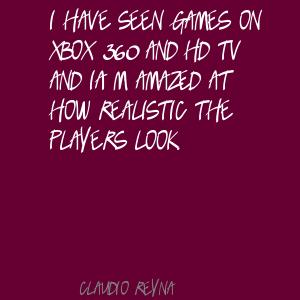 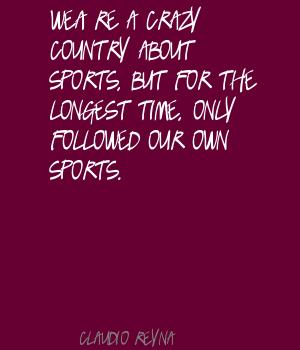 I have seen games on Xbox 360 and HD TV and I'm amazed at how realistic the players look.

We're a crazy country about sports, but for the longest time, only followed our own sports.

EA SPORTS has a strong partnership with adidas and through this relationship they approached adidas about using some of their top players from around the world.

I had to wait a while to get the scans back but it shows nothing in terms of needing surgery which is good. I hurt my AC joint and I just need to strengthen it. There is an outside chance to start training by the end of this week and if not than the start of next week.

I hear good things about Xbox Live from some of my younger teammates. I think it would be fun to be able to challenge fans all over the world. It would be cool to be able to play some of my friends back home in the States. I'm looking forward to trying it.

I think we have a good team, but soccer fans will know that we're in a really tough group. The three teams in our group are really strong. The Czech Republic is a very good team, Italy is traditionally a powerhouse, and Ghana is one of the best teams in Africa.

I think we have our sports within our own culture that are huge with baseball, football, basketball, and hockey. Those are the sports in America that we grow up with and soccer isn't really there yet.

I was on the sideline with a knee injury and when I came back, I wanted to play at the best level I could. And that's the case for a lot of players, they want the chance to play against the best competition.

It is an honor to be on the cover of this game because the World Cup is such a big thing around the world. My kids are really quite impressed so that's fun.

It's a unique situation as well because England is a small country, so it makes it easy for the fans to travel. If we play down in London, they get buses and we'll get three or four thousand fans come down. They'll all sit in the same area and show their support for the team.

It's the only sport that's played in every country in the world. It's played and watched all over the world, it's the most popular sport in probably 90% of the countries, and then with the World Cup, you have the most viewed tournament of any sport in the world.

Over the last 10-15 years, you've seen soccer finally start to grow at a fast pace, start to get the recognition it deserves, and I think it has to do with all of the people who come to America from foreign countries.

Sure we have skilled players, but the biggest thing might just be that we are so well conditioned and how we can play for 90 minutes at a high tempo which is needed in soccer at an international level.

The contracts are structured different than athletes in America, but for me, it was good to move on and go back to playing in the premiere league, which is the best league. It was disappointing, as far as the team goes, but for me, there wasn't much I could do.

The more people who come from abroad who played soccer and are brought up playing it and watching it, then come over to America and bring what they know and what they play, that's how the sport will grow.

What I've noticed in this game is how EA has even duplicated my moves and my style of play perfectly. It is really incredible and a lot of fun to play.

When I see myself in the videogame it's amazing how realistic I look. This is the most authentic and realistic soccer game I have ever seen. It is like I'm looking in a mirror. The attention to detail is incredible.

Camouflage hunter in a tree clipart