See the gallery for quotes by Dean Kamen. You can to use those 7 images of quotes as a desktop wallpapers. 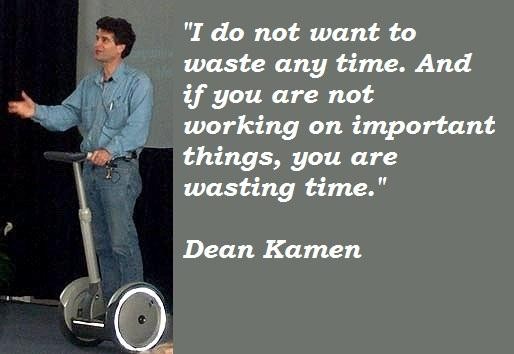 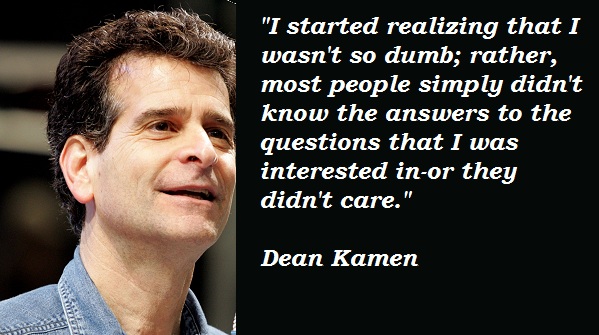 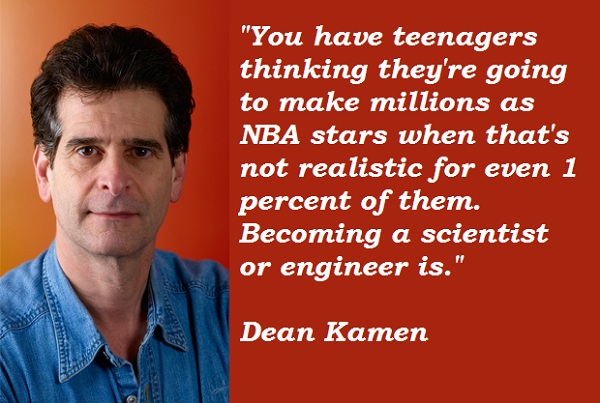 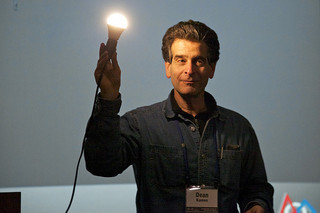 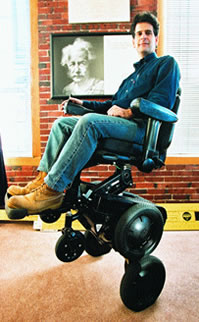 As we move towards 8 or 10 billion people on the planet, there's a little less gold per capita. Each one of us will continue to be fighting over an ever smaller percentage of total resources. This is not a happy thought.

In some cases, inventions prohibit innovation because we're so caught up in playing with the technology, we forget about the fact that it was supposed to be important.

You have teenagers thinking they're going to make millions as NBA stars when that's not realistic for even 1 percent of them. Becoming a scientist or engineer is.

I'd rather lose my own money than someone else's.

Tags: Else, Money, Someone

I do not want to waste any time. And if you are not working on important things, you are wasting time.

Sometimes we crash and burn. It's better to do it in private.

I don't want to think about how many people have thought or still think that I'm crazy.

I don't work on a project unless I believe that it will dramatically improve life for a bunch of people.

The city needs a car like a fish needs a bicycle.

People take the longest possible paths, digress to numerous dead ends, and make all kinds of mistakes. Then historians come along and write summaries of this messy, nonlinear process and make it appear like a simple, straight line.

Everybody has to be able to participate in a future that they want to live for. That's what technology can do.

I consider high-speed data transmission an invention that became a major innovation. It changed the way we all communicate.

I think an education is not only important, it is the most important thing you can do with your life.

If history is any indication, all truths will eventually turn out to be false.

If you're going to fail, you might as well fail at the big ones.

Most of the time you will fail, but you will also occasionally succeed. Those occasional successes make all the hard work and sacrifice worthwhile.

My biggest failure is I have too many to talk about.

My biggest worry is I'm running out of time and energy. Thirty years ago I thought 10 years was a really long time.

New ideas in technology are literally a dime-a-dozen, or cheaper than that.

Some broad themes brought me where I am today. At a very young age, my hobby became thinking and finding connections.

We can't live any more in a world which is based on stuff and not ideas. If you want to live with the world of stuff, we're all doomed.

Much more quotes by Dean Kamen below the page.

I started realizing that I wasn't so dumb; rather, most people simply didn't know the answers to the questions that I was interested in-or they didn't care.

There is just so much stuff in the world that, to me, is devoid of any real substance, value, and content that I just try to make sure that I am working on things that matter.