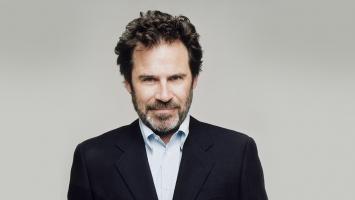 See the gallery for quotes by Dennis Miller. You can to use those 7 images of quotes as a desktop wallpapers. 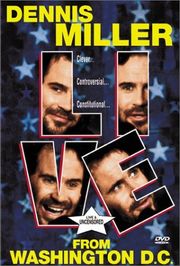 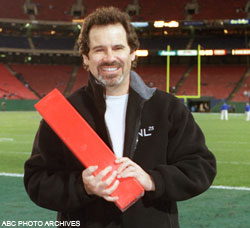 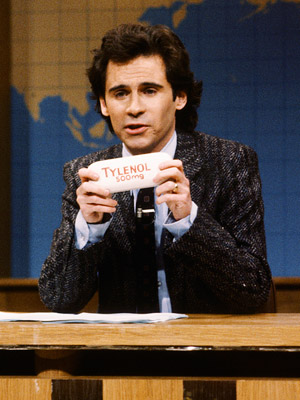 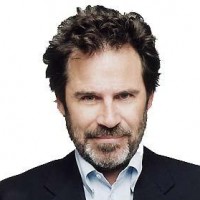 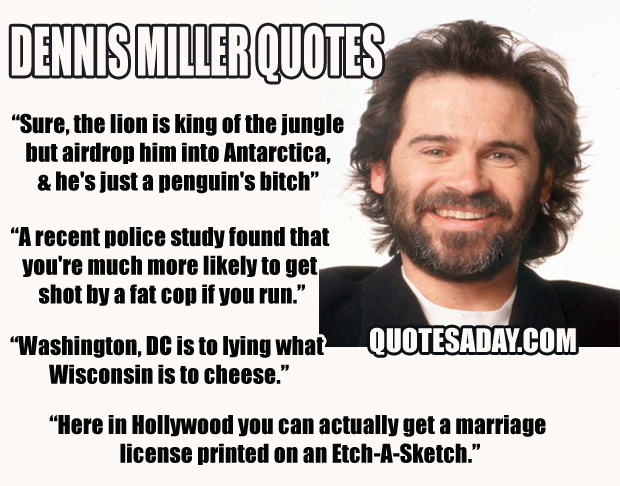 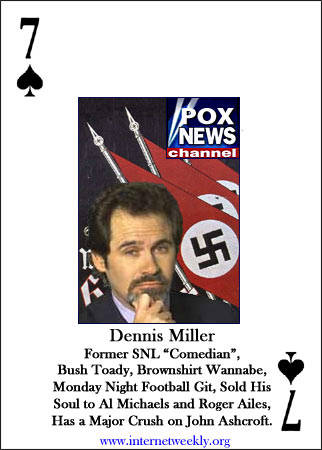 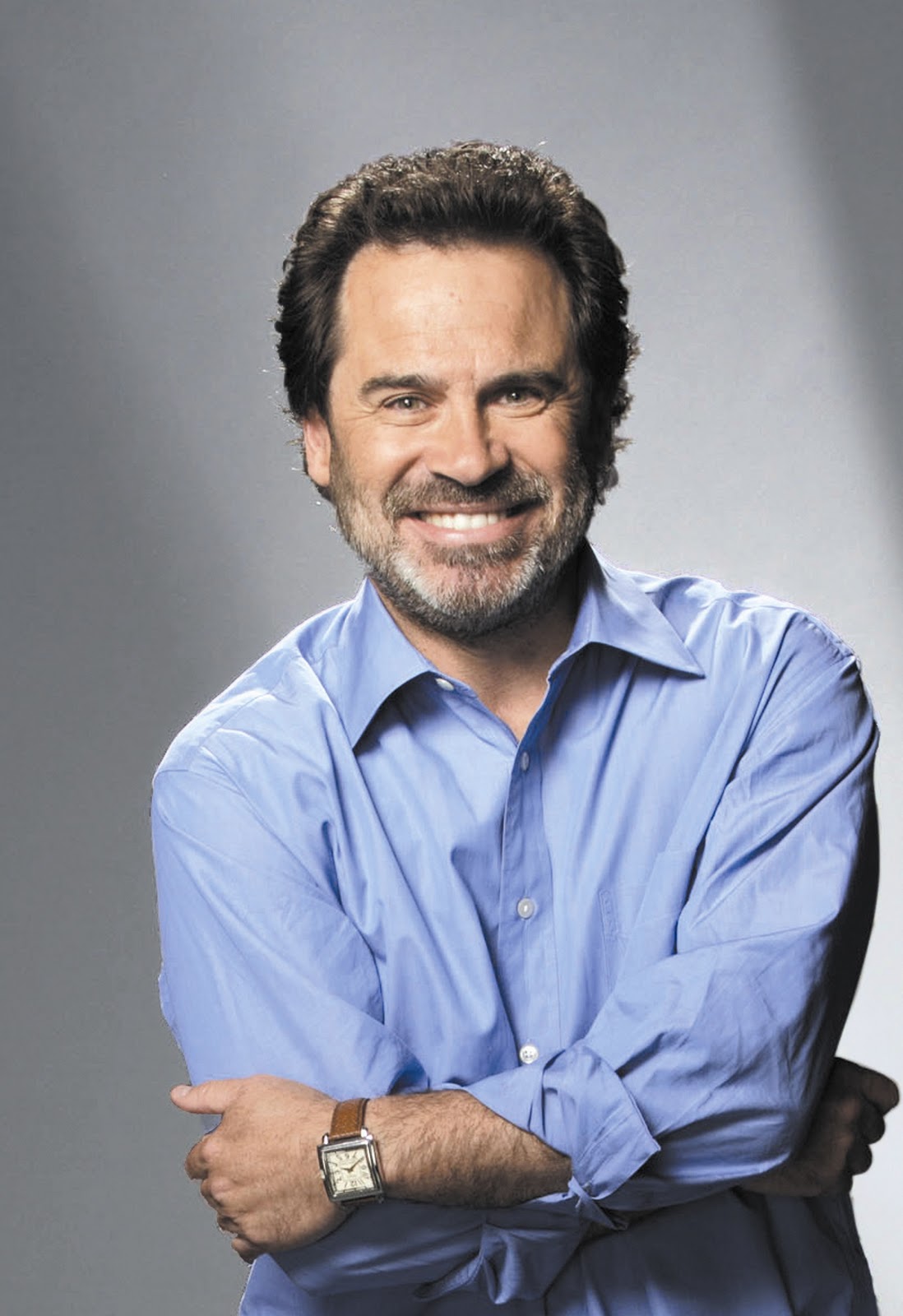 Police in Washington D.C. are now using cameras to catch drivers who go through red lights. Many congressmen this week opposed the use of the red light cameras incorrectly assuming they were being used for surveillance at local brothels.

We should fight to preserve a country where people such as Michael Moore get to miss the point as badly as he misses it. Michael Moore represents everything I detest in a human being.

Here in Hollywood you can actually get a marriage license printed on an Etch-A-Sketch.

I don't have credibility, I'm a comedian.

I had fun pretending to be a sportscaster. People always think that was a down thing for me. I had the best job in sports broadcasting for two years.

I'm one of the more pessimistic cats on the planet. I make Van Gogh look like a rodeo clown.

Joan Rivers telling Lauren Bacall her dress is all wrong is like Carrot Top telling Lenny Bruce he needs to get an edge.

The American education system couldn't be more badly directed or poorly funded if the Secretary of Education were Ed Wood.

The average American's day planner has fewer holes in it than Ray Charles's dart board.

Two wrongs may not make a right, but a thousand wrongs make a writer.

You've got bad eating habits if you use a grocery cart in 7-Eleven.

What is guilt? Guilt is the pledge drive constantly hammering in our heads that keeps us from fully enjoying the show. Guilt is the reason they put the articles in Playboy.

A new poll shows that Senator Kerry's support in the South is strongest amongst blacks. Kerry's appeal to Southern blacks is obvious. He is a white man who lives far, far away.

I didn't know my Dad - he moved out early. And my mom's politics were kind of hardscrabble. She didn't think about Democrats or Republicans. She thought about who made sense. I've been both in my life.

President Bush gave his first-ever presidential radio address in both English and Spanish. Reaction was mixed, however, as people were trying to figure out which one was which.

Somebody can say they don't understand why somebody drifts. But I've always found people who drift interesting, 'cause it shows me the game's not stagnant in their own head. They're thinking.

What's so touching is the way we fight the war right until the moment our business is taken care of and then we turn on a dime and we immediately start taking care of people. It's like a shock and aw shucks campaign.

A recent police study found that you're much more likely to get shot by a fat cop if you run.

Born again?! No, I'm not. Excuse me for getting it right the first time.

There's nothing wrong with being shallow as long as you're insightful about it.

You know there is a problem with the education system when you realize that out of the 3 R's only one begins with an R.

Much more quotes by Dennis Miller below the page.

I rant, therefore I am.

The White House looked into a plan that would allow illegal immigrants to stay in the United States. The plan called for a million Mexicans to marry a million of our ugliest citizens.

It's ironic that in our culture everyone's biggest complaint is about not having enough time; yet nothing terrifies us more than the thought of eternity.

America may be the best country in the world, but that's kind of like being the valedictorian of summer school.

Parenting is the most important job on the planet next to keeping Gary Busey off the nation's highways.

Never ever discount the idea of marriage. Sure, someone might tell you that marriage is just a piece of paper. Well, so is money, and what's more life-affirming than cold, hard cash?

The death penalty is becoming a way of life in this country.

Why is electricity so expensive these days? Why does it cost so much for something I can make with a balloon and my hair?

Human beings are human beings. They say what they want, don't they? They used to say it across the fence while they were hanging wash. Now they just say it on the Internet.

Everybody has to sell out at some point to make a living.

One man's Voltaire is another man's Screech.

Most Americans will let liberals and conservatives play their games because most Americans don't pay attention.

Now, I don't want to get off on a rant here, but guilt is simply God's way of letting you know that you're having too good a time.

The only way the French are going in is if we tell them we found truffles in Iraq.

Just put down 9/11... I think, on most things I'm liberal, except on defending ourselves and keeping half the money. Those things I'm kind of conservative on.