See the gallery for quotes by Glenn Beck. You can to use those 8 images of quotes as a desktop wallpapers. 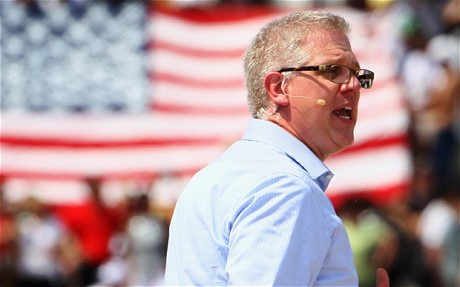 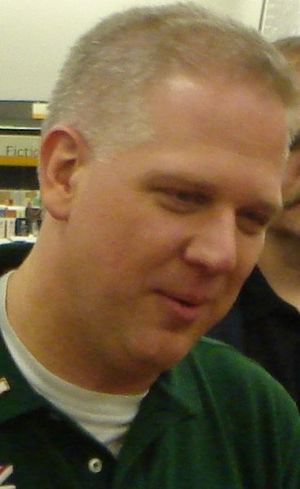 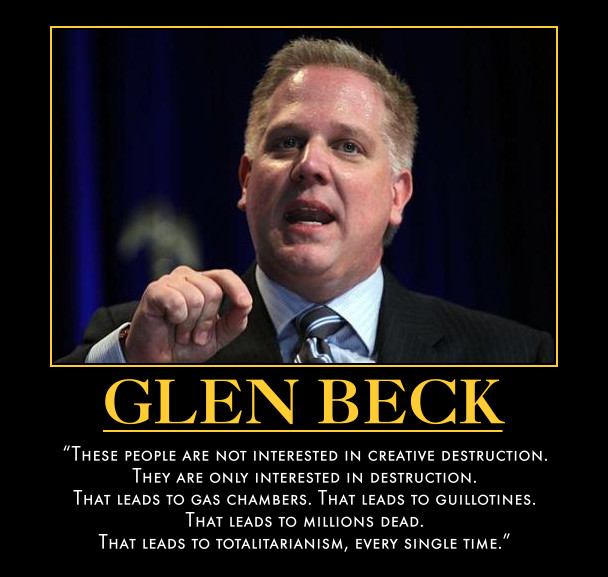 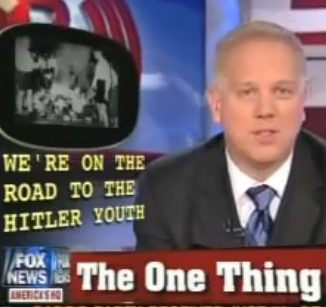 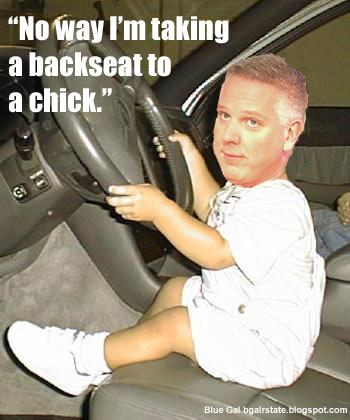 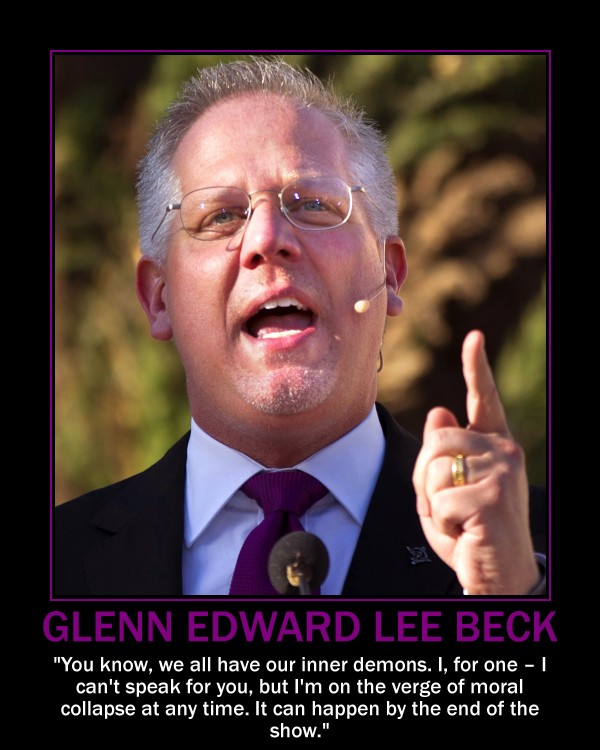 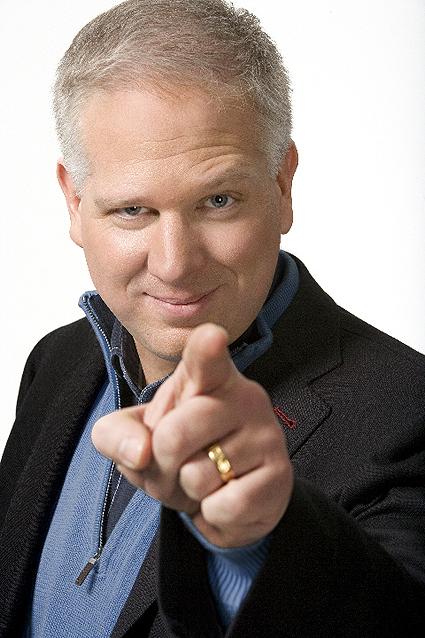 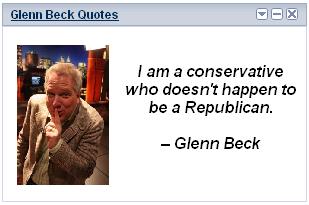 I believe that if we get out of people's way, the sky's the limit. The sky is the limit.

If you have a priest that is pushing social justice, go find another parish. Go alert your bishop.

It's a real blessing for me to tell you, sir, that calvary has arrived - Fox is here!

Music is the language of the heart, and conservatives always screw it up.

We just put General Motors in the hands of people who can't even run our own government.

When did it something of shame or ridicule to be a self-made man in America?

'Hello my name is the Republican Party and I got a problem. I'm addicted to spending and big government.' I'd like one of them just to stand up and say that.

A country is made not by policy alone, but by its music, its entertainment shows, all of it.

I can multitask like crazy. I'm riddled with ADD - a blessing and a curse.

I don't fancy myself a political commentator. I hate politics. I hate it.

I'm the whitest guy you will ever meet. The first time I saw an African-American, my dad had to tell me to stop staring.

My father told me abuse is generational.

Quite honestly, I was running from myself. But I knew how to work Top 40 radio.

Timothy McVeigh was a coward. Violence is the stupid way out. It'll discredit any real legitmate movement.

To restore America we need less Marx and more Madison.

What we don't have a right to is healthcare, housing, or handouts. We don't have those rights.

Without failure there is no sweetness in success. There's no understanding of it.

You've got to demand the truth from yourself.

No one is guaranteed happiness. You can pursue it, but if you happen to find success along the way on that road to happiness, Conservatives believe you should not be demonized or penalized for it.

You know, we all have our inner demons. I, for one - I can't speak for you, but I'm on the verge of moral collapse at any time. It can happen by the end of the show.

I'm a dad, and I no longer see a way for my kids to even inherit the money that I'm making, let alone go out there, have an idea, and create it in their own lifetime.

Much more quotes by Glenn Beck below the page.

Let me go over this again on the reclaiming the civil rights movement. People of faith that believe that you have an equal right to justice - that is the essence. And if it's not the essence, then we've been sold a pack of lies. The essence is everyone deserves a shot - the content of character, not the color of skin.

By the time I was 30, nobody would work with me. I was friendless, I was hopeless, I was suicidal, lost my family - I mean, it was bad. Bottomed out, didn't know what I was going to do. I actually thought I was going to be a chef - go to work in a kitchen someplace.

I wasn't just pro-choice, I was pro-everything, until I started taking everything off the table and began looking at things and asking if this view was consistent with that view.

Tags: Looking, Off, Until

The message that I gave on the - on the steps today was that you need to stand for those things that are right and empower the individual. Believe in the power of one person. Don't believe that you can't do it. Everybody wants - everybody wants a shot. That we can all agree on. Beyond that, it becomes politics. I'm not talking politics.

We all know what the problems are: it's tax and spend. One party will tax and spend, the other party won't tax but will spend. It's both of them together.

Tags: Both, Problems, Together

What I'm trying to do is get this message out about self-empowerment, entrepreneurial spirit and true Americanism - the way we were when we changed the world, when Edison was alone, failing his 2,000th time on the lightbulb.

When I was young, I used to hear people say, 'He's a golden boy. Look at that guy. Can you imagine what he's going to be like when he grows up?' Well, I unfortunately bought into that. And I hadn't even found myself. Quite honestly, I was running from myself. But I knew how to work Top 40 radio.

When you're true to yourself - not the audience that reads about me in the newspaper or sees a clip someplace, but the audience that actually comes and watches, just like Oprah - they get to know you and they sense something genuine.

Good for you, you have a heart, you can be a liberal. Now, couple your heart with your brain, and you can be a conservative.

Not a single time have we gotten a right from Congress or from the President. We get them from God.

Political Correctness doesn't change us, it shuts us up.

Please stop teaching my children that everyone gets a trophy just for participating. What is this, the Nobel Prize? Not everybody gets a trophy.

We should reject big government and look inside ourselves for all the things that built this country into what it was.

Remember, beneath every cynic there lies a romantic, and probably an injured one.

What does it mean to be a conservative? I don't even know anymore. I know what it means to me. It means to me, personal responsibility. That if I've done something wrong, its up to me to pay the price. It's up to me to make it right.

The worst is still ahead of us. But no one in Washington has the spine to tell you that.

We're giving our freedoms away. The American experiment was about freedom. Freedom to be stupid, freedom to fail, freedom to succeed.

The most used phrase in my administration if I were to be President would be 'What the hell you mean we're out of missiles?'

When you live in an alcoholic family or an abusive family, you tiptoe, you don't want to step on any mines.

People should be free, people should be unencumbered by regulation as much as possible, that big government always goes corrupt and the truth shall always set you free.

Every time the government grows we lose more of who we are.

I am like Howard Beale. When he came out of the rain and he was like, none of this makes any sense. I am that guy.

What is the point of competing for a trophy if everyone gets a trophy?

Oprah is wildly successful, and she's a brilliant businesswoman. She's also somebody who's overcome a ton of demons in her own life, and that's really what shaped her. I think the same could be said for me.

The majority does not rule in America, but the minority shouldn't hijack it. And it's because we're afraid. They have isolated us and made us feel as though we're alone. We're not.

I am a conservative, but I am not a zombie.