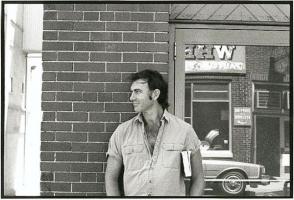 See the gallery for quotes by John Sayles. You can to use those 8 images of quotes as a desktop wallpapers. 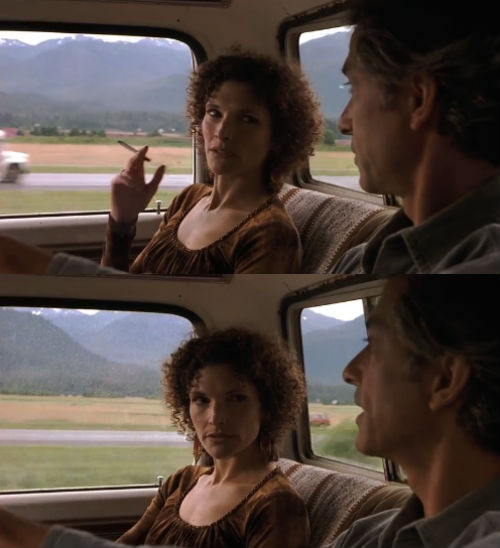 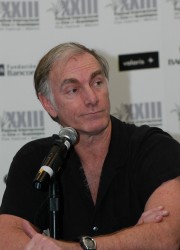 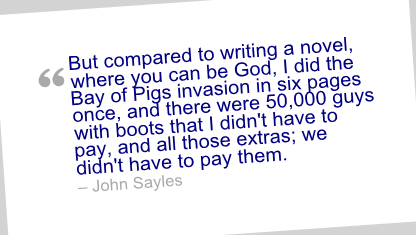 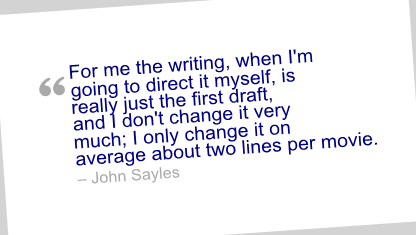 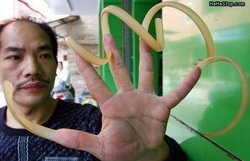 There are genres I don't care for, and I've never worked in those genres, and then sometimes there are people that I haven't liked and I haven't worked for those people. But if I feel like there's a movie that I would like to go see, I'll jump into it.

There was a widespread indignation in the American media. They were saying, 'How can you make a movie during an election that's about politics? What are you doing? Are you trying to influence people's lives?' To which my response was, 'Well, I hope so.'

There were not fifteen people in the story department and twenty-five producers and stuff. And Roger had produced 1,000 movies and directed a couple of hundred, and their comments were always very, very specific.

Those are fun, especially if they're going to shoot them in four weeks, because you know they're not going to mess with anything you do, so it can be very imaginative.

To this day, I get rewrite offers where they say: 'We feel this script needs work with character, dialogue, plot and tone,' and when you ask what's left, they say: 'Well, the typing is very good.'

We just said, 'Okay, you're in the movie. Bring what you would bring for a three-day weekend and I hope you like the way you look in it because once you're on camera, that's your wardrobe.' But it worked; it worked and we were very surprised.

Well, acting is cheap; I knew all these actors who weren't in the Screen Actors Guild yet, and it happened that they were all just about thirty years old.

You get to say, 'Here's my philosophical idea about what the costume should like,' and the costume designer comes and gives you choices and sometimes they're all good, and I say, 'What do you think?' and they pick the right thing.

I've always felt like I was on the margins. Once upon a time that's what independent used to mean.

I like to act. I work for scale. I don't have an acting agent. I'm in the book.

I probably wouldn't have done as many as I did in one year, which I did when I was trying to raise money.

If you write a movie for Roger Corman, it's going to get made. You saw it almost the next day.

Michael Moore, whether you like him or hate him, has done something very important.

The media in America has become so cowed and compromised.

When I was really young I didn't know that there was such a thing as a screenwriter. I wrote stories.

And it was out in the theaters in two weeks. This is not, 'We're going to develop twenty-five and maybe one's going to get made,' so the first three things I wrote got up on the screen and, good, bad or indifferent, I got to see them on their feet.

Basically, if you could get a good trailer out of the script, Roger had no objection to you making a really good movie. He liked it if you did. He liked the more cleverness and ingenuity you could bring to it. He just wasn't going to give you any more money.

But compared to writing a novel, where you can be God, I did the Bay of Pigs invasion in six pages once, and there were 50,000 guys with boots that I didn't have to pay, and all those extras; we didn't have to pay them.

Fahrenheit 9/11 took public domain information that should have been on the news every night and put it in a film that a lot of people went to see. But still Bush has never had to answer those charges.

For me the writing, when I'm going to direct it myself, is really just the first draft, and I don't change it very much; I only change it on average about two lines per movie.

I always feel that there are no final victories and no final defeats. But it's true that America is in a hole right now. There are a lot of dead fish in the water.

I certainly grew up seeing more movies and television than I read books, but when it came time to do the thing itself you don't have to hire a lot of people to sit down and write a book, so that was the story-telling medium that was available to me.

I figured somebody wrote a story who had a typewriter and I thought that movies were made by the cowboys and that they just said, 'Okay, you fall off the horse this time.'

I figured, 'When is that ever going to happen again?'. So I basically set out the opposite way movies are made; I set out with a budget first. I said, 'What can I do well for $40,000?'.

I never thought about being a writer as I grew up. A writer wasn't something I wanted to be. An outfielder was something to be. Most of what I know about style I learned from Roberto Clemente.

Much more quotes by John Sayles below the page.

I remember being out here at the Sunset Marquis, and whoever knocked on the door, I would take that picture that I was writing and I would put that in the typewriter, so when I had the meeting, they would say: 'Oh, you're working on it right now?'

I take more jobs when I need more money, if I'm investing in films. I take fewer when I don't. Or if something really good comes along, I usually find a way to do a good job on it in the time that I've got.

In a movie you have all these logistical problems; all these practical problems. But you're also going to have people come who can do things that you can't do, and you get to direct their talents.

My argument has always been that this is not an anti-Bush film, it's a pro-democracy film. And if Bush comes out on the wrong side of democracy, that's his problem.

Not that I've always loved the movie when they finally come out, or if they ever come out-because many of them don't come out-but I've gotten to work with really good story editors and stuff like that.

The hardest thing about movie acting is that if you're playing a character who changes within the movie, you've got to do that, but you've got to do it out of sequence, because we never have gotten to shoot in sequence, and that's really, really tough.