See the gallery for quotes by Lucy Powell. You can to use those 8 images of quotes as a desktop wallpapers. 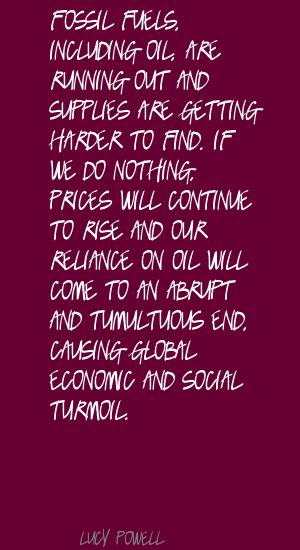 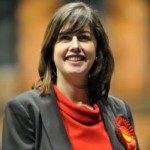 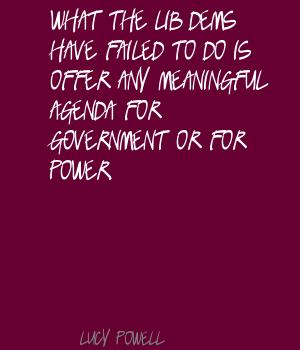 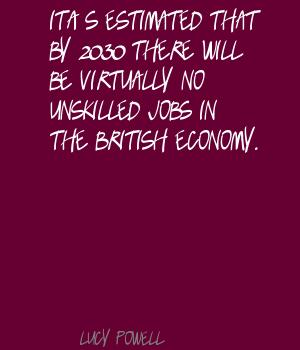 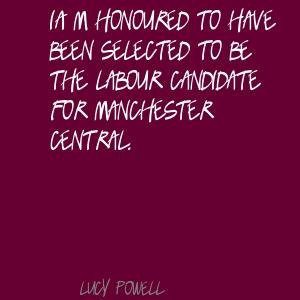 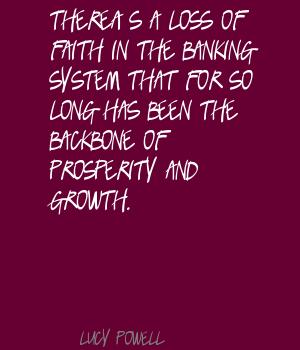 Over the last 15 years or so, Manchester has undergone huge transformation - from a city in decline and on its knees to one that is growing, vibrant and confident.

People in south Manchester overwhelming want to be able to recycle more than they currently can - especially cardboard and plastics - and want more frequent and accessible collections, particularly for those living in flats.

People rightly want our political leaders - on all sides - to concentrate on minimising the damage to jobs, living standards and our savings from the banking crisis.

Surely, the best and most effective measure is to get the economy moving and shorten the period of recession or slowdown. That's the rationale for Gordon Brown's 'fiscal stimulus' and it sounds like a good one to me.

Team GB's success at the Beijing Olympics can, in part, be said to have been made in Manchester. For example, all the cycling medal winners trained at Manchester's velodrome, the National Cycling Centre.

The economic and social decline of Zimbabwe is shocking and appalling. Life there is unrecognisable from that of the recent past. Each day is a struggle for basic survival.

Much more quotes by Lucy Powell below the page.

The impact of the downturn is starting to feel very real. House prices and the housing market have been taking the knock for some time and that's affecting people.

The Labour party has done more than any other to address gender inequalities, through legislation and other means, and to increase women's representation in politics, which has led to recent increases in the number of female politicians.

The lack of available credit and loans is having a severe impact on small businesses in particular, but also their suppliers and the bigger companies too.

The Tories and the Lib Dems talk about social mobility, but, short of winning the lottery, the only way to guarantee young people from all backgrounds the opportunity to do better and to raise aspirations is through education.

These are tough times and under this Tory-led government many people in Manchester are suffering and getting left behind. If elected I will use all my energy, skills, experience and knowledge to stand up for our communities and get things done for the better.

Today the demands are for even higher standards in the quality of care, for greater flexibility and convenience in treatment times, and for more prevention through screening and health checks.

We in the Labour party know better than most that opposition is the easy part. What's more difficult is governing and setting out an agenda for government.

We in the Labour party owe it to the people we represent to make sure that we offer a choice at the next election between our Labour values and those of the Conservatives.

Tags: Between, Choice, Sure

We need to dig deep and give people a reason to be optimistic just as Obama is doing in America. Because in the same way that outcome of the U.S. elections will change the course of events there and around the world, so too do politics here in Britain.

Funding for sports (and the arts) are often the first things facing the chop in difficult times.

Some argue that now isn't the time to push the green agenda - that all efforts should be on preventing a serious recession. That is a false choice. It fails to recognise that climate change and our carbon reliance is part of problem - high fuel prices and food shortages due to poor crop yields compound today's financial difficulties.

Both the velodrome and the Commonwealth swimming pool are open to the public and are frequently used by local schools and the local community. Over the last six years young people have been inspired to take up swimming and cycling more seriously; some of them are now coming through as Olympic champions or hopefuls.

Indeed, when all parties campaign effectively the overall effect is to push up voting rates, as you see in tight marginal seats or close general elections. That must be good for democracy.

A global deal will only be possible if Britain plays its part, leading the way with other developed countries.

At times unpopular measures are needed in order to change behaviour.

Connecting people to jobs and to each other is absolutely vital to a city's economy (and to the wider economy).

I just hope that the democratic will of the Zimbabwean people prevails. If it does we must move quickly to help restore stability and prosperity.

In Scotland, the indication is that for the Westminster elections at least, Labour voters are satisfied with their government.

It's estimated that by 2030 there will be virtually no unskilled jobs in the British economy.

Like many of my friends and colleagues, I can't get enough of Obama news; latest polling, speeches, visits, reaction of world leaders.

Sixteen- and 17-year-olds pay taxes and can join the army, so surely they should in turn be given their right to vote.

The choice between a Labour government and a Tory one is sharpening minds.

The cost of motoring is a massive issue at the moment, there's no question. The price of petrol goes up every time you go to the petrol station.

The Tories seem unable to make any impact north of the border.

There's a loss of faith in the banking system that for so long has been the backbone of prosperity and growth.

What the Lib Dems have failed to do is offer any meaningful agenda for government or for power.

You're wrong if you think young people don't deserve the vote.

Although my seat is a contest between Labour and the Lib Dems, it could well make the difference between a Labour and a Tory government at the next election. In terms of international development, this choice is a very clear one.

As a relatively young woman - I'm 33 - I hope to one day have a family and already have commitments. If and when I'm elected as an MP, I would face a choice: take my family with me to London each week or be apart for four, maybe five, nights a week.

As the economy faces such difficulties, more tough questions need to be asked about what the Tories would do if elected. Their ideology of free markets and small government needs challenging. That has to be part of our job.

As the prospect of a Tory government gets nearer, many traditional Labour voters - some who switched away in recent times and many who stayed at home - seem more determined to prevent that happening.

At its most basic the democratic contract is a simple one: the right to vote comes with a responsibility to society, through tax payments and citizenship.