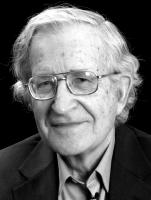 See the gallery for quotes by Noam Chomsky. You can to use those 8 images of quotes as a desktop wallpapers. 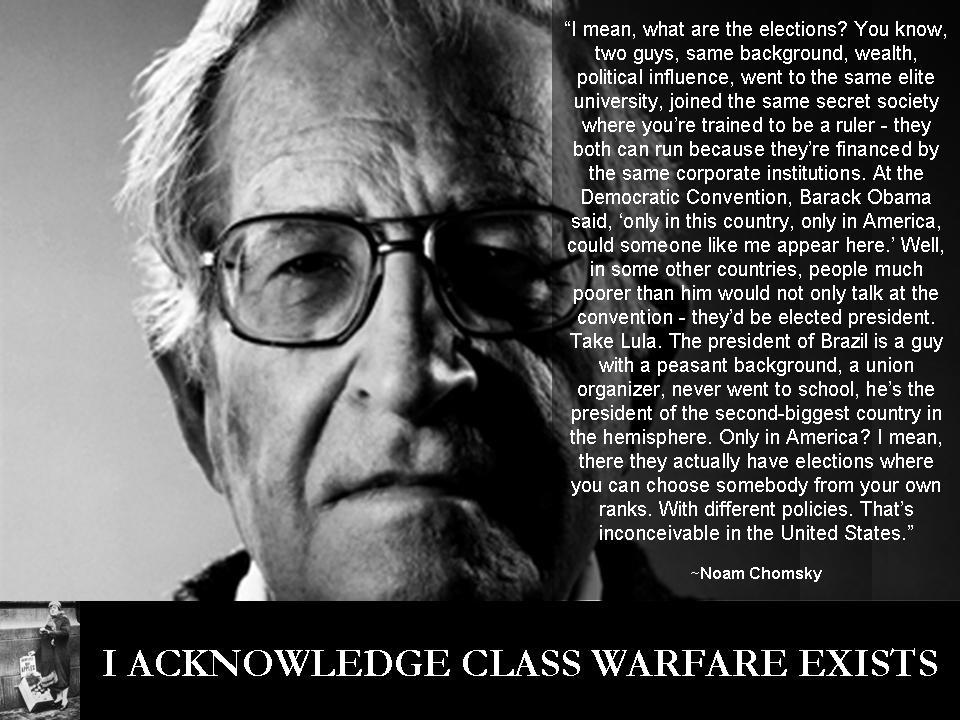 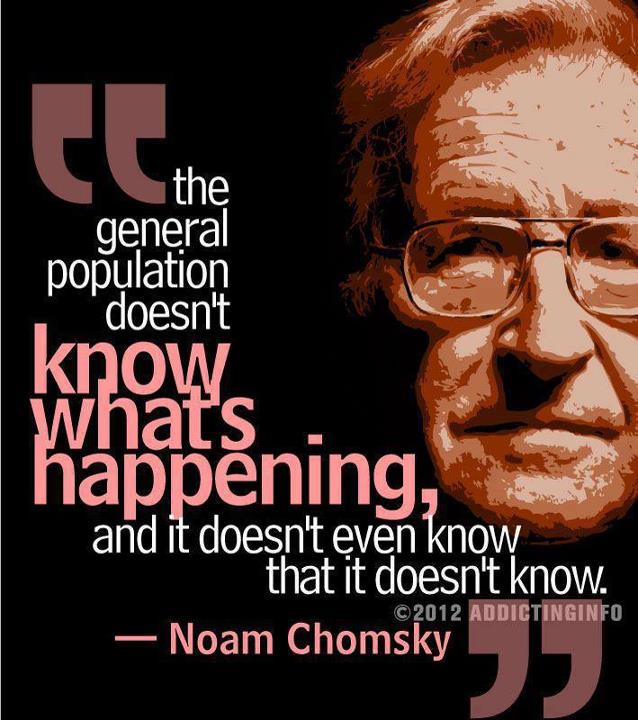 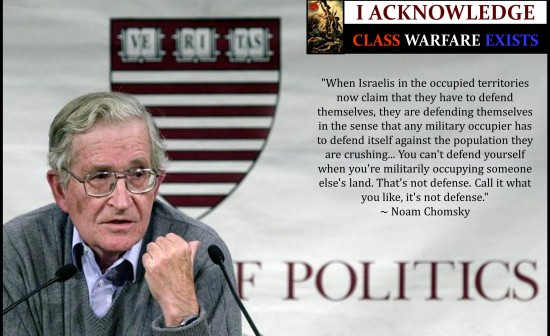 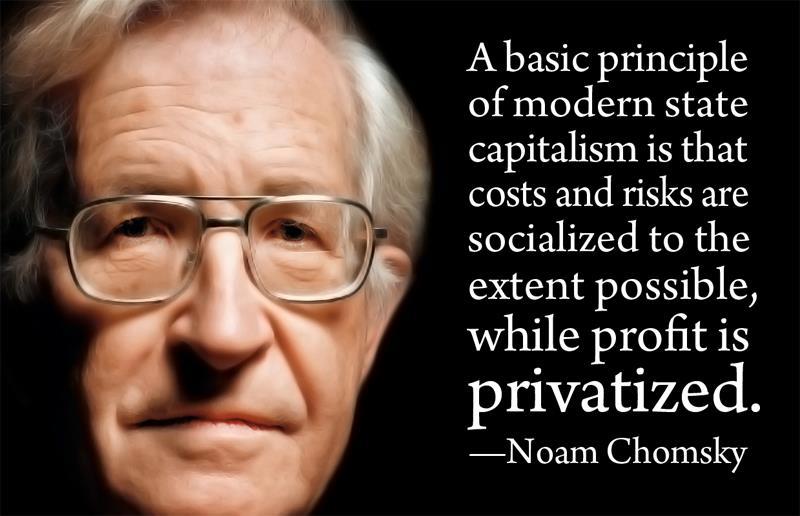 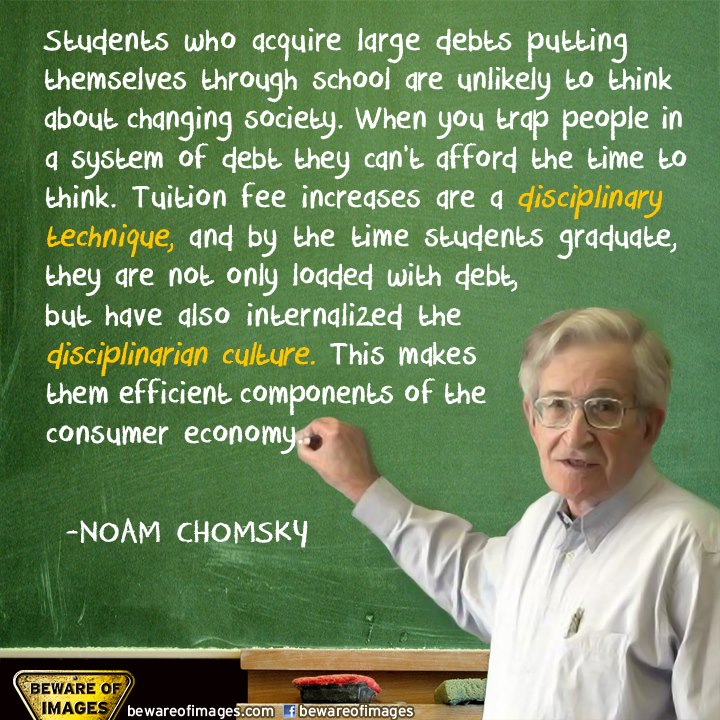 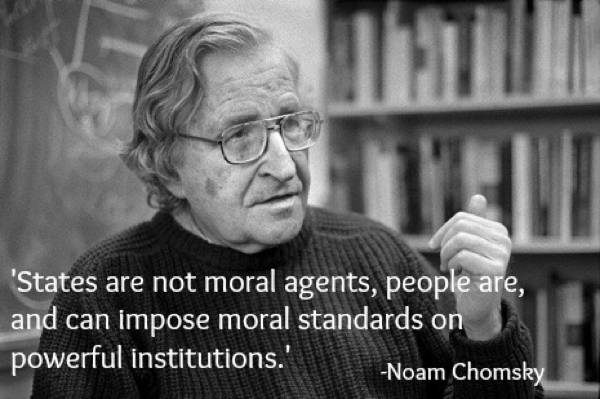 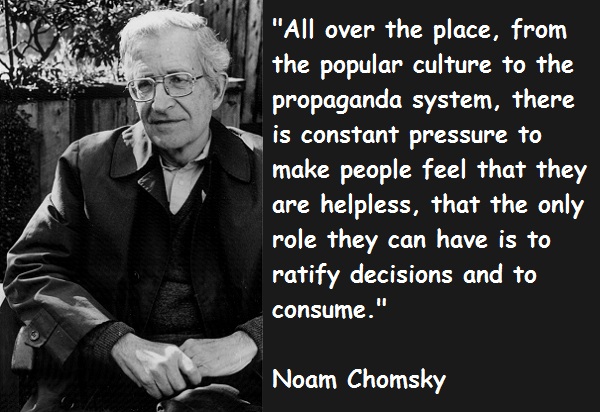 The United States is unusual among the industrial democracies in the rigidity of the system of ideological control - 'indoctrination,' we might say - exercised through the mass media.

You cannot control your own population by force, but it can be distracted by consumption.

If you're teaching today what you were teaching five years ago, either the field is dead or you are.

Censorship is never over for those who have experienced it. It is a brand on the imagination that affects the individual who has suffered it, forever.

Stability is when the U.K. and U.S. invade a country and impose the regime of their choice.

There are two problems for our species' survival - nuclear war and environmental catastrophe - and we're hurtling towards them. Knowingly.

There are massive efforts on the part of the internet's corporate owners to try to direct it to become a technique of marginalisation and control.

Growing up in the place I did I never was aware of any other option but to question everything.

The internet could be a very positive step towards education, organisation and participation in a meaningful society.

The principle that human nature, in its psychological aspects, is nothing more than a product of history and given social relations removes all barriers to coercion and manipulation by the powerful.

As a Zionist youth leader in the 1940s, I was among those who called for a binational state in Mandatory Palestine. When a Jewish state was declared, I felt that it should have the rights of other states - no more, no less.

We can, for example, be fairly confident that either there will be a world without war or there won't be a world - at least, a world inhabited by creatures other than bacteria and beetles, with some scattering of others.

Anti-Americanism is a pure totalitarian concept. The very notion is idiotic.

Unlimited economic growth has the marvelous quality of stilling discontent while maintaining privilege, a fact that has not gone unnoticed among liberal economists.

I am opposed to the accumulation of executive power anywhere.

In the late 1990s, some of the worst terrorist atrocities in the world were what the Turkish government itself called state terror, namely massive atrocities, 80 percent of the arms coming from the United States, millions of refugees, tens of thousands of people killed, hideous repression, that's international terror, and we can go on and on.

The people who were honored in the Bible were the false prophets. It was the ones we call the prophets who were jailed and driven into the desert.

In many respects, the United States is a great country. Freedom of speech is protected more than in any other country. It is also a very free society.

Real popular culture is folk art - coalminers' songs and so forth.

Human language appears to be a unique phenomenon, without significant analogue in the animal world.

As soon as questions of will or decision or reason or choice of action arise, human science is at a loss.

The major advances in speed of communication and ability to interact took place more than a century ago. The shift from sailing ships to telegraph was far more radical than that from telephone to email!

I remember at the age of five travelling on a trolley car with my mother past a group of women on a picket line at a textile plant, seeing them being viciously beaten by security people. So that kind of thing stayed with me.

Much more quotes by Noam Chomsky below the page.

In the literal sense, there has been no relevant evolution since the trek from Africa. But there has been substantial progress towards higher standards of rights, justice and freedom - along with all too many illustrations of how remote is the goal of a decent society.

If you are giving a graduate course you don't try to impress the students with oratory, you try to challenge them, get them to question you.

States are not moral agents.

I don't have any oratory skills. But I would not use them if I had.

How people themselves perceive what they are doing is not a question that interests me.

Humans have certain properties and characteristics which are intrinsic to them, just as every other organism does. That's human nature.

In America, the professor talks to the mechanic. They are in the same category.

Concentration of executive power, unless it's very temporary and for specific circumstances, let's say fighting world war two, it's an assault on democracy.

The 'anti-globalisation movement' is the most significant proponent of globalisation - but in the interests of people, not concentrations of state-private power.

The only justification for repressive institutions is material and cultural deficit. But such institutions, at certain stages of history, perpetuate and produce such a deficit, and even threaten human survival.

Anywhere in Latin America there is a potential threat of the pathology of caudillismo and it has to be guarded against.

As a research tool, the internet is invaluable.

In the academic world, most of the work that is done is clerical. A lot of the work done by professors is routine.

My proposal happens to be very mainstream.

Now financial liberalization is just a catastrophe waiting to happen, and there are very well understood reasons for that.

State formation has been a brutal project, with many hideous consequences. But the results exist, and their pernicious aspects should be overcome.

For 500 years, since European explorers came, Latin American countries had been separated from one another. They had very limited relations. Integration is a prerequisite for independence.

Tags: American, Another, Since

When I was a college student and I got interested in linguistics the concern among students was, this is a lot of fun, but after we have done a structural analysis of every language in the world what's left? It was assumed there were basically no puzzles.

The more you can increase fear of drugs and crime, welfare mothers, immigrants and aliens, the more you control all the people.

All over the place, from the popular culture to the propaganda system, there is constant pressure to make people feel that they are helpless, that the only role they can have is to ratify decisions and to consume.

In the US, there is basically one party - the business party. It has two factions, called Democrats and Republicans, which are somewhat different but carry out variations on the same policies. By and large, I am opposed to those policies. As is most of the population.

Any dictator would admire the uniformity and obedience of the U.S. media.

The Bible is one of the most genocidal books in history.

If we choose, we can live in a world of comforting illusion.

If there was an observer on Mars, they would probably be amazed that we have survived this long.

In this possibly terminal phase of human existence, democracy and freedom are more than just ideals to be valued - they may be essential to survival.

To some degree it matters who's in office, but it matters more how much pressure they're under from the public.

I have often thought that if a rational Fascist dictatorship were to exist, then it would choose the American system.

If you are working 50 hours a week in a factory, you don't have time to read 10 newspapers a day and go back to declassified government archives. But such people may have far-reaching insights into the way the world works.

Propaganda is to a democracy what the bludgeon is to a totalitarian state.

The intellectual tradition is one of servility to power, and if I didn't betray it I'd be ashamed of myself.

The public is not to see where power lies, how it shapes policy, and for what ends. Rather, people are to hate and fear one another.

States are not moral agents, people are, and can impose moral standards on powerful institutions.

Education must provide the opportunities for self-fulfillment; it can at best provide a rich and challenging environment for the individual to explore, in his own way.