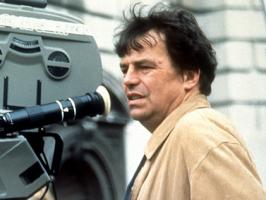 See the gallery for quotes by Neil Jordan. You can to use those 6 images of quotes as a desktop wallpapers. 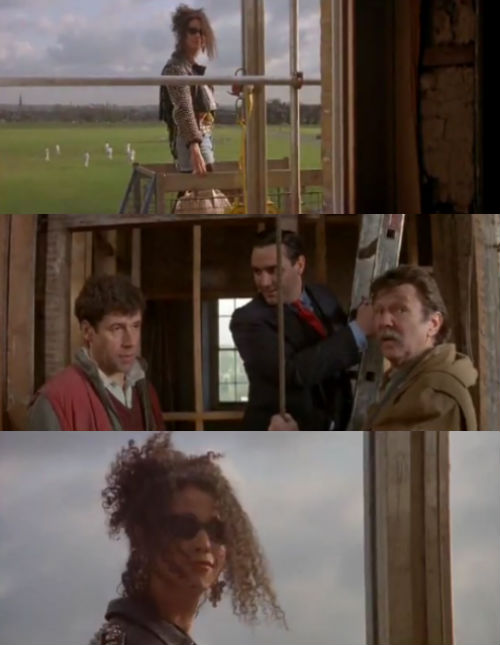 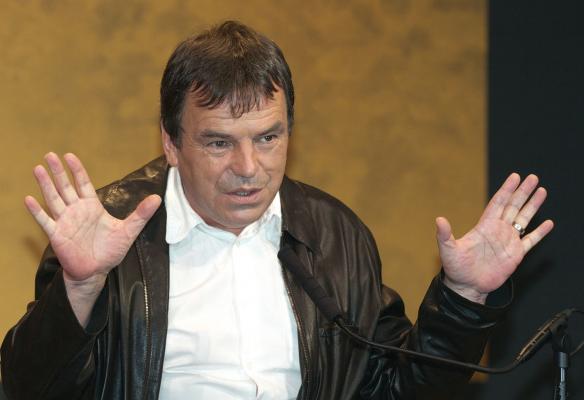 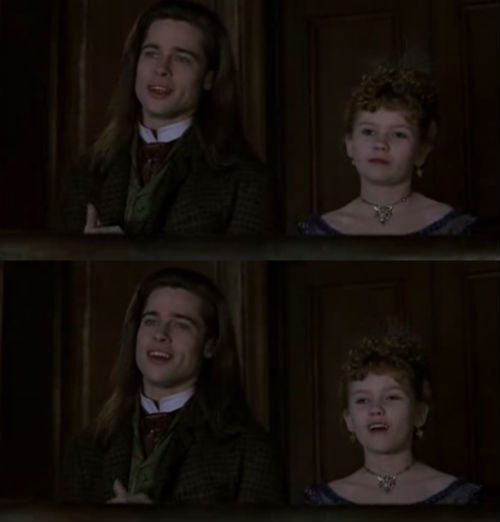 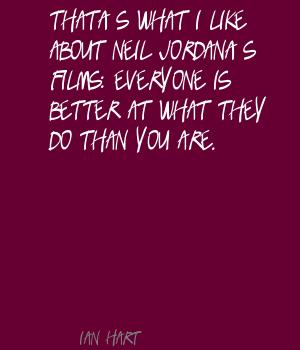 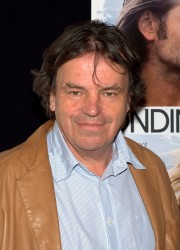 No, I just thought of a story and wrote down what I saw. It was about two kids in Ireland who went around killing people. It was called Travelers, and it was made as an independent film.

The Company of Wolves is about how society teaches young women to look at themselves, and what to be afraid of. It's about a girl learning that the world of sensuality and the unknown is not to be feared, that it's worth getting your teeth into.

The most difficult thing is the organization of people and the expression of your intentions. It's very easy to have a picture in your head and to imagine that you've told everybody about what you need.

Well, if you're talking about the current climate, there's a lack of content in American film because I think people are deeply confused about their emotions, and they don't regret certain aspects of their own foreign policy.

When you've written a movie, you then get together with a whole lot of people and make it. In many ways, I think it is far nicer to be with people rather than being completely solitary.

Tags: Rather, Together, Whole

Why should a horror film be just a horror film? To me, The Company of Wolves is a fairy tale; it's got all those elements plus a lot more. And we know that fairy tales aren't innocent any more.

And I think I often choose to do something because it's quite different from what I've done before.

Films have gotten leaner and leaner, cutting out all variations from the story line.

For me, the filmmaking has to be about the dramaturgy.

I can't do a film if I don't start with the writing.

I do enjoy working with writers.

I took two years away from making films to write a novel.

I'm less comfortable making American movies because I don't know them so well.

It is extremely difficult to get movies that cost more than $40 million to be made these days.

It's the same thing in a way, although writing a book is a very solitary thing.

Never make a promise - you may have to keep it.

The End of the Affair is almost like a play.

There's no point in making a film out of a great book. The book's already great. What's the point?

Well, Company of Wolves was about that literally, about fairy tales.

Much more quotes by Neil Jordan below the page.

Well, I suppose I'm interested in ways of storytelling and in stories that are about storytelling.

For me now, it's about what you would write and what you wouldn't write, and that's how I select what I am going to do. It can be quite nice being brought a concept by a studio for me to work on.

I mean I grew up in Ireland, so one would have to be consciously blinkered not to have reflected on the issue of political violence because that was the story since I was 19 years old or 20.

I've also worked hard portraying an Ireland which is fast disappearing. Ireland was a very depressed and difficult place in the 1980s, and I've tried to include that in the script. I worked really hard to find the heart of the book.

I've had three novels published, and I was working a little bit in theater in Ireland. I wrote one film script just to see what it would turn out like.

In Dreams... well, I was slightly overcompensating with that. I was a bit like a director for hire, so maybe I was putting too much imagery that was familiar to me into it.

Initially with The Butcher Boy, there was this kid growing up in this strange, weird environment that I remember from when I was a kid. And Patrick's vision was so complete there.

It's hard to know whether certain characters come to life or not, they either come to have their own life or they don't. I've written many things in which the characters just remain inert.

It's nice to work with Hollywood because there is never any question of resources put at your disposal to make a film as long as it is the right thing to do.

It's the opposite journey from what I've usually done with films. I find it very easy to go from, say, a lit, pleasurable environment, like what you see outside there, to a very dark place. But the opposite journey, which is what this movie takes, is much more complicated.

My conception of it was that in a normal film you have a story with different movements that program, develop, go a little bit off the trunk, come back, and end.