See the gallery for quotes by Paul Berg. You can to use those 7 images of quotes as a desktop wallpapers. 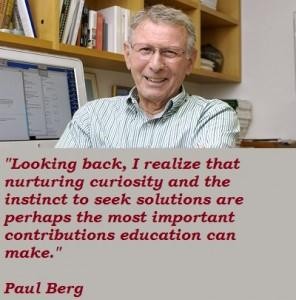 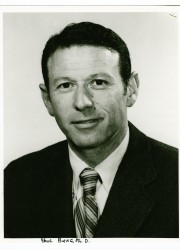 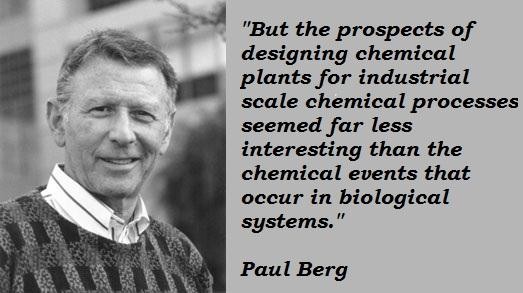 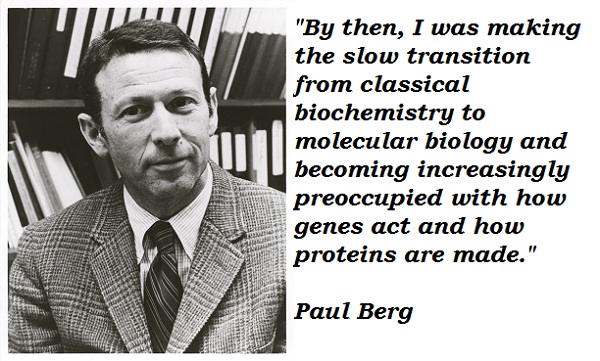 With time, many of the facts I learned were forgotten but I never lost the excitement of discovery.

By that time I was hooked on a career in academic research instead of one in the pharmaceutical industry that I had originally considered in deciding to get a PhD.

But I felt it necessary to be part of the war effort and I enlisted in the Navy to be a flyer.

Looking back, I realize that nurturing curiosity and the instinct to seek solutions are perhaps the most important contributions education can make.

But the prospects of designing chemical plants for industrial scale chemical processes seemed far less interesting than the chemical events that occur in biological systems.

By then, I was making the slow transition from classical biochemistry to molecular biology and becoming increasingly preoccupied with how genes act and how proteins are made.

Fears of creating new kinds of plagues or of altering human evolution or of irreversibly altering the environment were only some of the concerns that were rampant.

Moreover, the concern of some that moving DNA among species would breach customary breeding barriers and have profound effects on natural evolutionary processes has substantially disappeared as the science revealed that such exchanges occur in nature.

Novel technologies and ideas that impinge on human biology and their perceived impact on human values have renewed strains in the relationship between science and society.

Paradoxically, no such embargo exists for the drugs and therapies that have revolutionized the treatment of serious diseases although many of them were created with the same technologies.

That work led to the emergence of the recombinant DNA technology thereby providing a major tool for analyzing mammalian gene structure and function and formed the basis for me receiving the 1980 Nobel Prize in Chemistry.

Today, it is research with human embryonic stem cells and attempts to prepare cloned stem cells for research and medical therapies that are being disavowed as being ethically unacceptable.

Yet the effort to inform the public also encouraged responsible public discussion that succeeded in developing a consensus for the measured approach that many scientists supported. 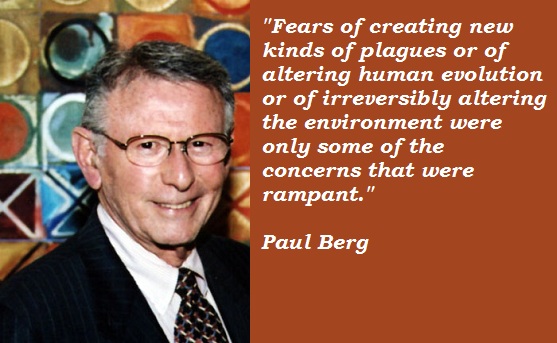