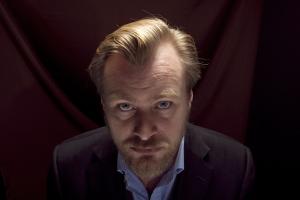 See the gallery for quotes by Christopher Nolan. You can to use those 8 images of quotes as a desktop wallpapers. 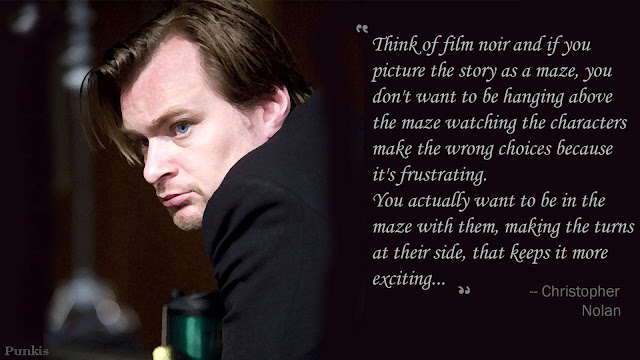 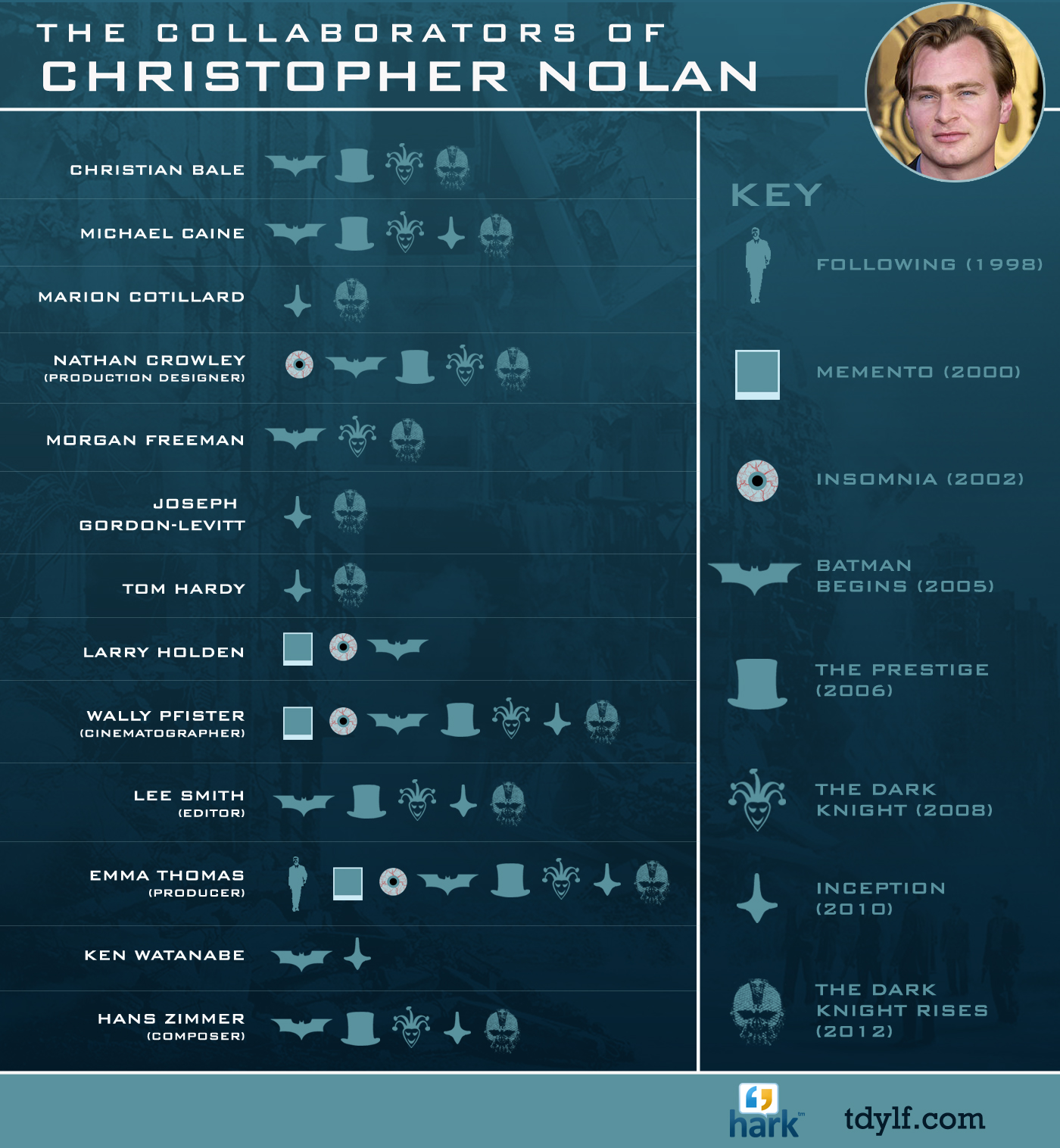 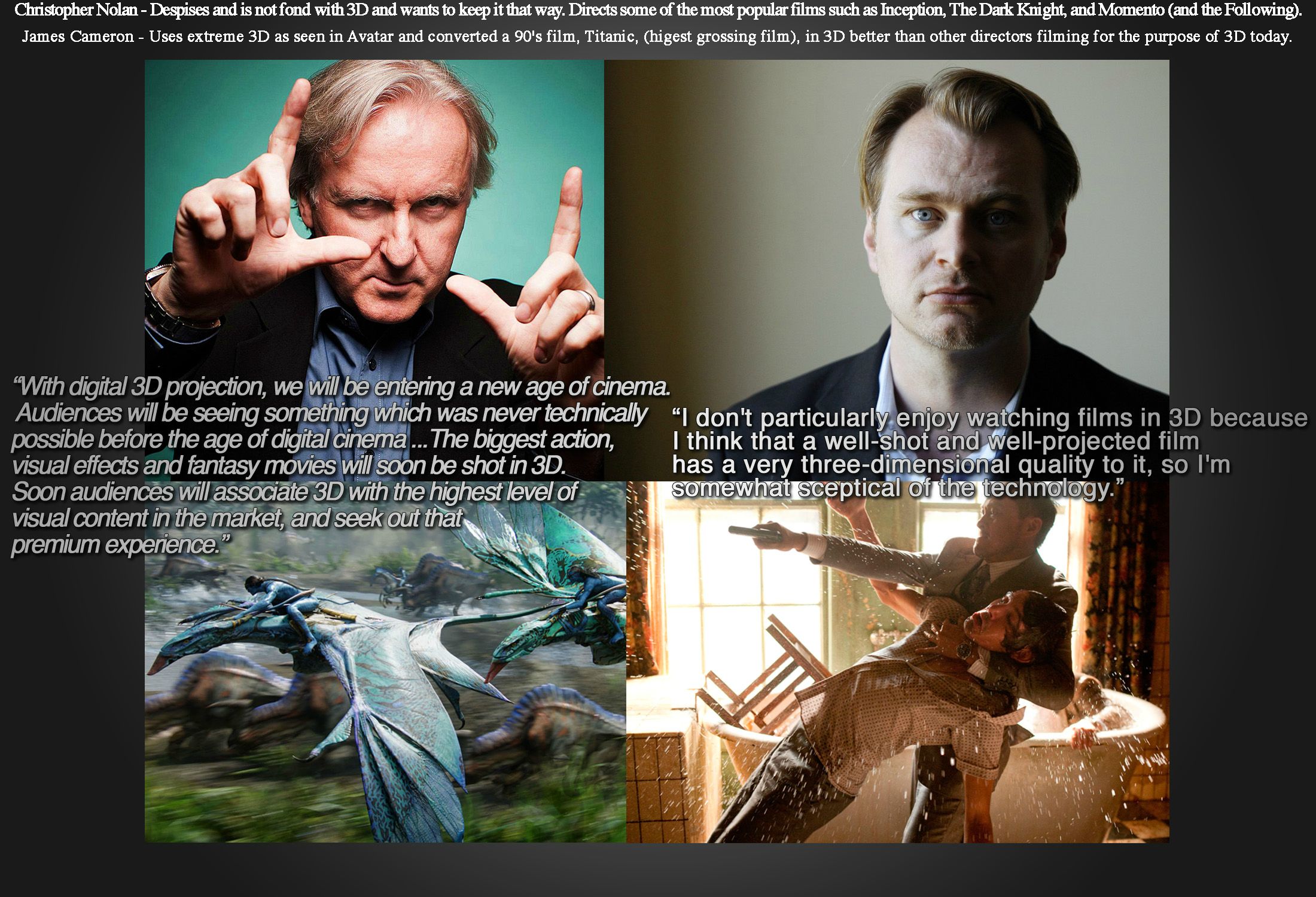 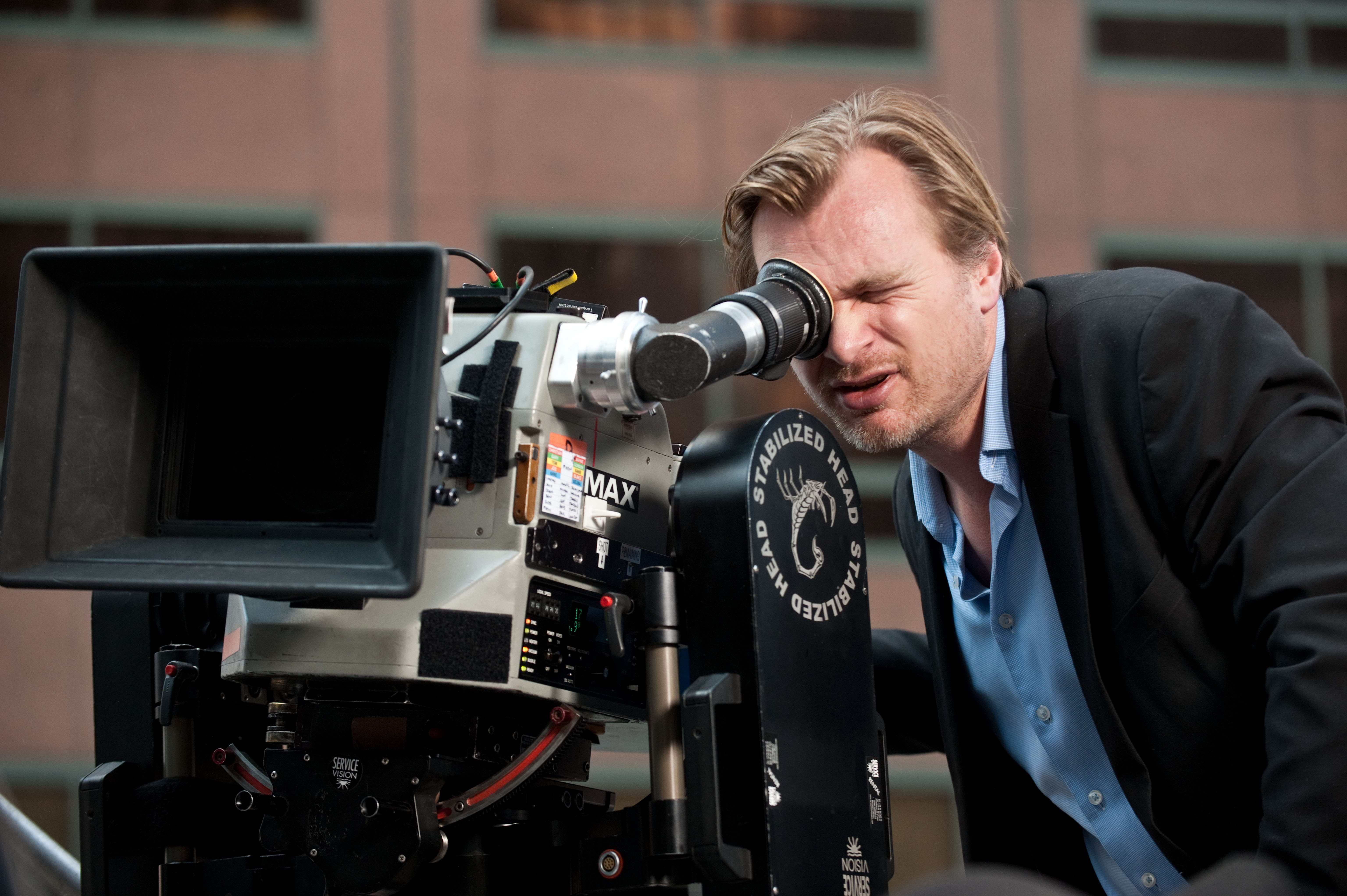 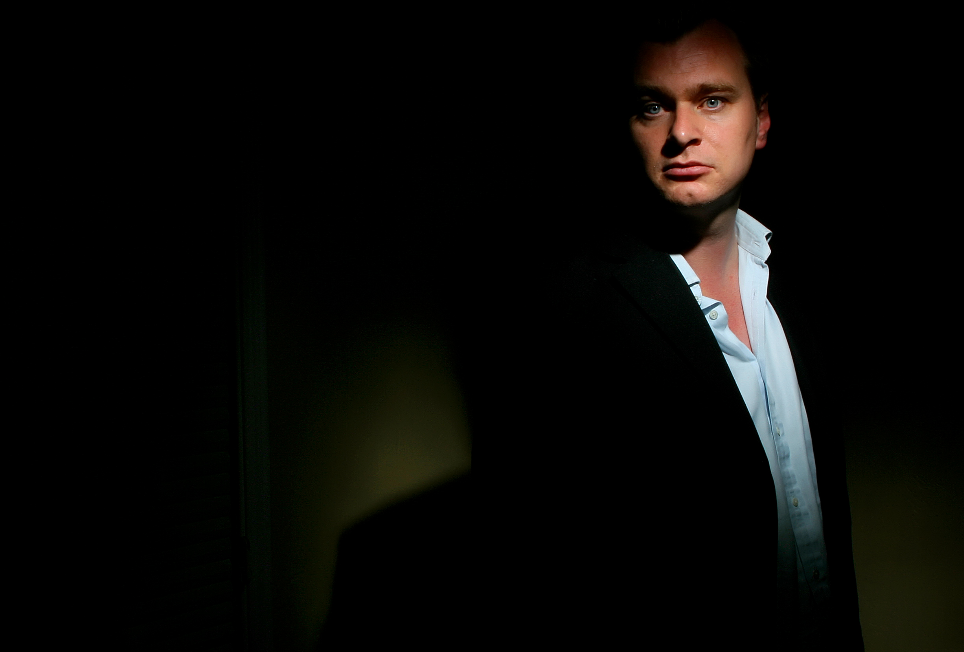 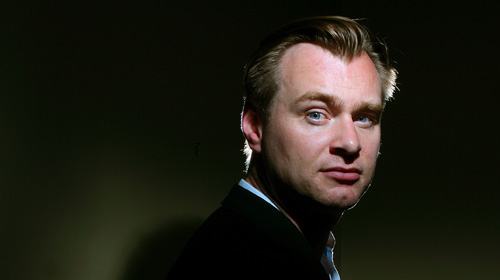 I don't particularly enjoy watching films in 3D because I think that a well-shot and well-projected film has a very three-dimensional quality to it, so I'm somewhat sceptical of the technology.

In Hollywood there's a great openness, almost a voracious appetite for new people. In England there's a great suspicion of the new. In cultural terms, that can be a good thing, but when you're trying to break into the film industry, it's definitely a bad thing.

One of the things you do as a writer and as a filmmaker is grasp for resonant symbols and imagery without necessarily fully understanding it yourself.

We all wake up in the morning wanting to live our lives the way we know we should. But we usually don't, in small ways. That's what makes a character like Batman so fascinating. He plays out our conflicts on a much larger scale.

But 'Memento' was so successful, such a huge cult hit, almost on the scale of a large film. If that had happened, with all the acclaim, before the next job, I'd have found it very difficult to figure out what to do next.

But I have been interested in dreams, really since I was a kid. I have always been fascinated by the idea that your mind, when you are asleep, can create a world in a dream and you are perceiving it as though it really existed.

But in the back of my mind I've always looked to the biggest-scale Hollywood movies. Because to me the most satisfying experience is of watching a movie, if it's done really well. And so that aspiration is always it for me, if I have the opportunity to do it.

But, in each case, as a filmmaker who's been given sizable budgets with which to work, I feel a responsibility to the audience to be shooting with the absolute highest quality technology that I can and make the film in a way that I want.

For the last 10 years, I've felt increasing pressure to stop shooting film and start shooting video, but I've never understood why. It's cheaper to work on film, it's far better looking, it's the technology that's been known and understood for a hundred years, and it's extremely reliable.

I have always been a huge fan of Ridley Scott and certainly when I was a kid. 'Alien,' 'Blade Runner' just blew me away because they created these extraordinary worlds that were just completely immersive. I was also an enormous Stanley Kubrick fan for similar reasons.

I made 'Batman' the way I made every other film, and I've done it to my own satisfaction - because the film, truly, is exactly the way I wanted it to be.

I sometimes think how strange it is that I've got to do exactly what I want, and that is difficult to cope with. You have to remind yourself every few weeks: I'm making this film and this is exactly what I want to do. And suddenly you're happy again.

I think there has been this increasing misperception that kids will not respond to something because it's also for adults. I think that often that tends to get underestimated.

I try not to have actors in mind when I write because the tendency then is to be influenced by either their last performance or your favourite of their performances.

My approach with actors is to try and give them whatever it is they need from me. Direction to me is about listening and responding and realizing how much they need to know from me and how much they have figured out for themselves, really.

Tags: Give, Try, Whatever

The thing with computer-generated imagery is that it's an incredibly powerful tool for making better visual effects. But I believe in an absolute difference between animation and photography.

Well, you always discover a lot in the editing room. Particularly the action, because you have to over-shoot a lot and shoot an enormous amount of material because many of the sequences have to be discovered in the editing and manipulation of it.

Yeah, it's odd when you look back at your own work. Some filmmakers don't look back at their work at all. I look at my work a lot, actually. I feel like I learned something while looking at stuff I've done in terms of what I'm going to do in the future, mistakes I've made and things at work or what have you.

You know when Hollywood does a great big blockbuster that really wraps you up in a world, and lets you believe in extraordinary things that move you in some way, in an almost operatic sensibility? That to me is the most fun I have at the movies.

Batman and Superman are very different characters but they're both iconic and elemental. Finding the right story for them both is the key.

I have been interested in dreams, really since I was a kid. I have always been fascinated by the idea that your mind, when you are asleep, can create a world in a dream and you are perceiving it as though it really existed.

The term 'genre' eventually becomes pejorative because you're referring to something that's so codified and ritualised that it ceases to have the power and meaning it had when it first started.

As soon as television became the only secondary way in which films were watched, films had to adhere to a pretty linear system, whereby you can drift off for ten minutes and go and answer the phone and not really lose your place.

The best actors instinctively feel out what the other actors need, and they just accommodate it.

Much more quotes by Christopher Nolan below the page.

Superheroes fill a gap in the pop culture psyche, similar to the role of Greek mythology. There isn't really anything else that does the job in modern terms. For me, Batman is the one that can most clearly be taken seriously.

Batman and Superman are very different characters but they're both iconic and elemental.

I just love photographing things and putting them together to tell a story.

I never considered myself a lucky person. I'm the most extraordinary pessimist. I truly am.

I think there are advantages to different scales of filmmaking. You wouldn't want to do just one thing.

I think there's a vague sense out there that movies are becoming more and more unreal. I know I've felt it.

I'm taking a bit of a wait-and-see attitude towards 3D.

I'm very happy where 3-D is going, which is that it's becoming a choice - and thankfully, most people are still choosing 2-D.

I've always been a movie guy, movies have been my thing. I love movies, all kinds of movies.

I've been interested in dreams since I as a kid and I've wanted to do a film about them for a long time.

I've never read Joseph Campbell, and I don't know all that much about story archetypes.

If I could steal someone's dream myself, I'd have to go for one of Orson Welles.

No, I've only ever done one film at a time.

The only job that was ever of interest to me other than filmmaking is architecture.

The problem with big films is they snowball very rapidly and you can never pull back. It's a pipeline that needs to be fed.

To be honest, I don't enjoy watching movies much when I'm working. They tend to fall apart on me a bit.

When I look at a digitally acquired and projected image, it looks inferior against an original negative anamorphic print or an IMAX one.