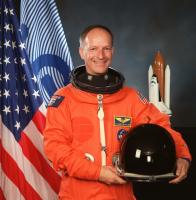 See the gallery for quotes by Claude Nicollier. You can to use those 8 images of quotes as a desktop wallpapers. 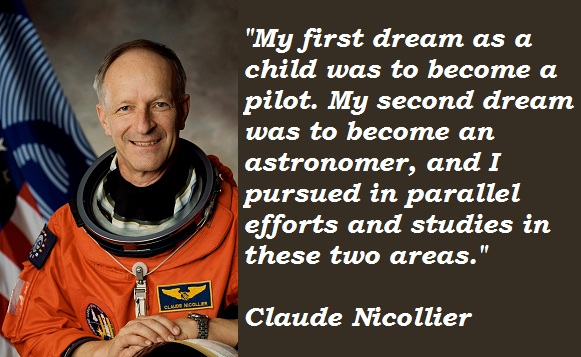 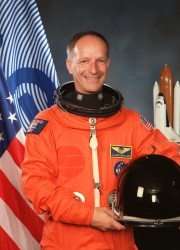 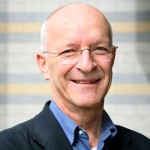 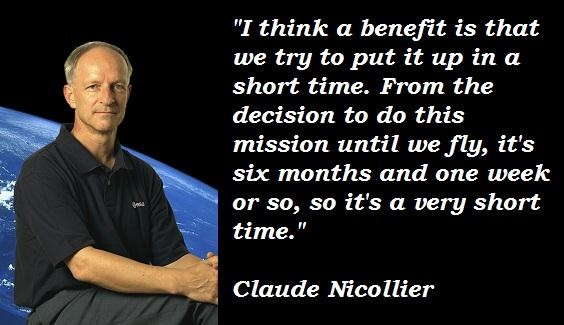 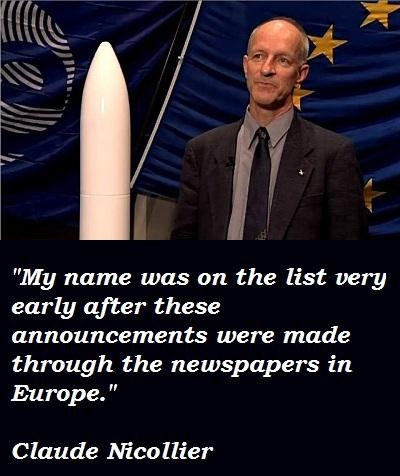 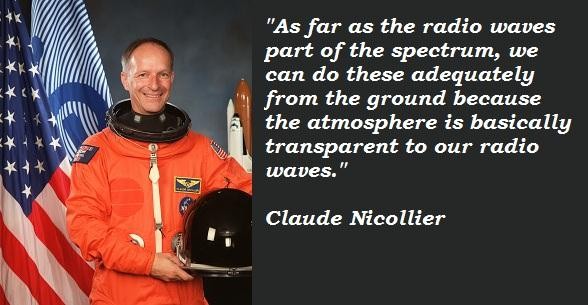 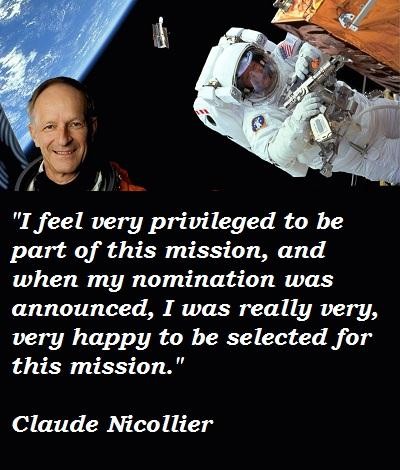 You can see these boxes which are covered with metal foils for thermal reasons, and they are also, most of the time, thermally controlled inside to keep reasonable temperature inside each of these containers.

Hubble is very close to my heart, and going back to Hubble, because I was there once already in 1993, is really a great privilege for me.

My name was on the list very early after these announcements were made through the newspapers in Europe.

The future infrared space telescope will cover that area in a much more efficient manner.

Then, much later, my next dream was to become an astronaut, and I was fortunate to realize that dream, also.

As far as the radio waves part of the spectrum, we can do these adequately from the ground because the atmosphere is basically transparent to our radio waves.

I feel very privileged to be part of this mission, and when my nomination was announced, I was really very, very happy to be selected for this mission.

I think a benefit is that we try to put it up in a short time. From the decision to do this mission until we fly, it's six months and one week or so, so it's a very short time.

I would say the most help I got was from my dad. My dad is a civil engineer in Switzerland; he's 90 years old now, so he's no longer active as a civil engineer, but still a very active person.

In general, the objects in the universe that are very high-energy objects, or the processes that are high-energy processes, will radiate more in the short wavelength range towards the gamma rays or the x-rays.

It is going to be an experiment of how it works, and I see I have all reasons to believe that it will work fine. But it's a short time. And we also have pushed the envelope here a little beyond what has been done in the past.

My first dream as a child was to become a pilot. My second dream was to become an astronomer, and I pursued in parallel efforts and studies in these two areas.

On one hand, to be able to go from one direction in the sky to study such an object to another direction to study another object, and on the other hand to be able to maintain accurately the position in space.

The Next Generation Space Telescope, which will be located much further away from the Earth than the Hubble Space Telescope presently is, will also explore the infrared part of the spectrum.

Tags: Away, Earth, Next

The objects that are of moderate energy, like our sun or most of the stars that we see in the night sky with the naked eye, are objects in which relatively moderate energy processes are taking place.

We have the Fine Guidance Sensors, one of which we will exchange out of three. Another one we changed on the last servicing mission, and on the fourth servicing mission in 2003 or 2004, the third one will be exchanged.