See the gallery for quotes by Dougray Scott. You can to use those 5 images of quotes as a desktop wallpapers. 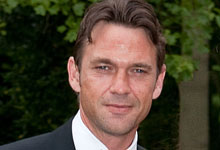 In terms of jumping into a character's skin, I try to immerse myself in the role as much as possible to bring me closer to them. All I do is what's required to achieve what I want to achieve.

What was the reason for invading Iraq' Was it a humanitarian crusade or an economic one' I would be inclined to say the latter. It was the same with the Civil War, because the landed gentry's money was being stolen by the king.

When I'm playing a character like Jonathan in Ripley's Game I want to be in the moment when he's feeling pain; this very ordinary person who finds himself in extraordinary circumstances.

You're making a movie, not a documentary. If you made a film like the historians would like you to make, you're not going to go and see it. I'd rather see paint dry.

Being a salesman and an actor were not that dissimilar: It is a good lesson in covering up your feelings. No one wants to buy from someone who looks depressed.

You should be careful what you wish for, as the reasons for war get confused. One person can be very clear in their motives, but others can have different agendas.

Fairfax was incredibly important to the shaping of the country.

I am an actor through and through.

I tend to do golf charity things because it's much safer and you don't get much chance of a broken arm or leg.

I try and do films I know I'm going to enjoy watching as well as being in.

It quite often happens that they attach a name to a project and it doesn't get all the financing it needs.

It's difficult to get films made, especially films about poets.

It's nice to be asked to do good projects.

Method acting is a label I don't really understand, because there's a method to everybody's acting.

Much more quotes by Dougray Scott below the page.

My focus never wavered; I never accepted the film was not going to be finished.

People go to see a film because it's a great story and it's visually exciting to watch.

Sometimes it is easier to play someone who is far away from you.

Tags: Away, Someone, Sometimes

Sometimes people say to you that you should try to be in a bigger film, but it's the way it pans out.

Sometimes you just can't walk away from films you're offered, like the Dylan Thomas thing.

The point is to be involved in the moment.

The success of the film is down to the crew.

When you do bigger films, the financiers take more risks.

With the situation now, people might be intrigued to see how a country coped with war all those years ago.

You grow up a lot in terms of your understanding of the industry and how to deal with the corporate things.

I just love jumping into someone else's life. It is a relatively cheap way to experience things you would be too scared to contemplate in your own life.