See the gallery for quotes by Elliot Richardson. You can to use those 8 images of quotes as a desktop wallpapers. 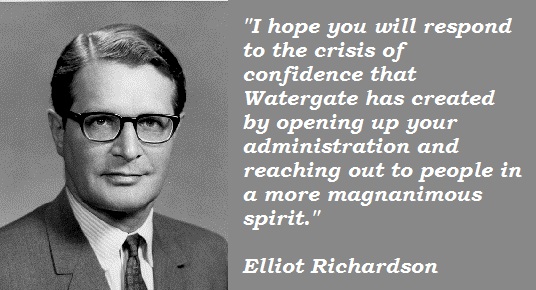 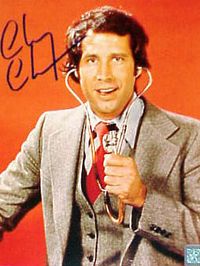 I hope you will respond to the crisis of confidence that Watergate has created by opening up your administration and reaching out to people in a more magnanimous spirit.

If there are flaws they are in ourselves, and our task therefore must be one not of redesign but of renewal and reaffirmation, especially of the standards in which all of us believe.

There is an increasingly pervasive sense not only of failure, but of futility. The legislative process has become a cruel shell game and the service system has become a bureaucratic maze, inefficient, incomprehensible, and inaccessible.

I had come to regard the U.S. Senate's rejection of the League of Nations as a tragic mistake.

I said the first concern of the administration of justice must, of course, be the individual. The second concern is the truth.

My most important task must be an attempt to bring the monster under democratic direction and control.

People have moved beyond apathy, beyond skepticism into deep cynicism.

The Watergate reforms did work well for many years, and if improved and broadened, these reforms can have real and major impact on the system today.

But tending machinery was one thing; defining what we were trying to do and why we were doing it, and developing ways to measure how well the job was done - this was something else again.

For you, the state is an entity with purposes of its own that the people can be required to serve. For us the word is only a label for the arrangements by which we the people delegate to some among us responsibility for things that concern us in common.

I thought I was going to be killed. The casualties were so heavy, it was just a given. I learned to take each day, each mission, as it came. That's an attitude I've carried into my professional life. I take each case, each job, as it comes.

If the large power voluntarily abstains from using its full power or feels the strategic situation to be such that it cannot do so, it in effect loses the advantage of being a big power.

It often seemed like we had become a nation where the only heroes were rock singers and ball players and that there were no large men of probity who could be called upon for the task.

Mr. President, I believe your real problem is that you have somehow been unable to realize that you have won, not only won, but been re-elected by a tremendous margin.

The experience of learning how to get straight to the core of a problem proved to be of immense value later when I had a long succession of responsibilities in large, complex government departments.

The idea of being in the State Department was exciting. On the other hand, I always had in the back of my mind going into politics. If I stayed in Washington, I might end up a government hack.

The vice president had a bargaining asset, however, that no ordinary person has: He was next in line to the presidency. I saw no chance that he would resign first, then take his chances on trial, conviction, and jail.

They've got him - credible witnesses, documents, heaven knows what else. In all my years as a prosecutor I have never seen such an open-and-shut case.

Tags: Else, Heaven, Him

This anniversary serves to help remind the American people that, in the wake of one of the greatest political scandals and misuse of power in our history as a nation, scandal produced important reforms that served this nation well for two decades.

Though every legal task demands this skill, it is especially important in the effort to frame public policy in a way that is properly responsive to human needs and predicaments. The question is always: How will the general rule work in practice?