See the gallery for quotes by John Boyd Orr. You can to use those 7 images of quotes as a desktop wallpapers. 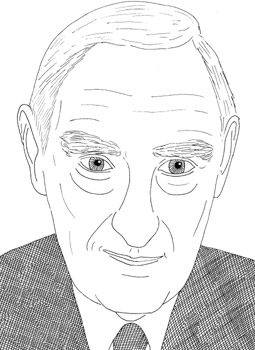 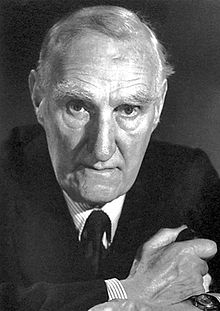 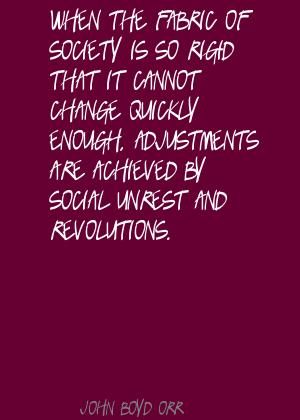 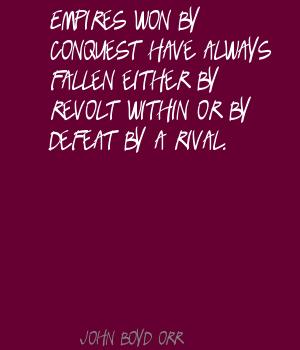 We are now physically, politically, and economically one world and nations so interdependent that the absolute national sovereignty of nations is no longer possible.

When the fabric of society is so rigid that it cannot change quickly enough, adjustments are achieved by social unrest and revolutions.

There can be no peace in the world so long as a large proportion of the population lack the necessities of life and believe that a change of the political and economic system will make them available. World peace must be based on world plenty.

After the First World War the economic problem was no longer one of production. It was the problem of finding markets to get the output of industry and agriculture dispersed and consumed.

In the last five or six thousand years, empires one after another have arisen, waxed powerful by wars of conquest, and fallen by internal revolution or attack from without.

It is said that those whom the gods wish to destroy they first make mad. It may well be that a war neurosis stirred up by propaganda of fear and hatred is the prelude to destruction.

Science has produced such powerful weapons that in a war between great powers there would be neither victor nor vanquished. Both would be overwhelmed in destruction.

When the Industrial Revolution of the nineteenth century brought a rapid increase in wealth, the demand of workers for a fair share of the wealth they were creating was conceded only after riots and strikes.

Measured in time of transport and communication, the whole round globe is now smaller than a small European country was a hundred years ago.

Nearly every country in the world is now becoming industrialized as rapidly as it can.

Our civilization has evolved through the continuous adjustment of society to the stimulus of new knowledge.

Our civilization is now in the transition stage between the age of warring empires and a new age of world unity and peace.

Some think the worst horrors of war might be avoided by an international agreement not to use atomic bombs. This is a vain hope.

The history of our civilization has been one of intermittent war.

The real evil of the Russian communist state is not communism. It is the secret police and the concentration camp.

As I have tried to show, science, in producing the airplane and the wireless, has created a new international political environment to which governments must adjust their foreign policies.

As we have seen, the wireless and the airplane have made the world so small and nations so dependent on each other that the only alternative to war is the United States of the World.

During the last war when there was a market for everything that could be produced, the production capacity of Canada and the United States, which were outside the battle area, increased one hundred percent.

However difficult it may be to bring it about, some form of world government, with agreed international law and means of enforcing the law, is inevitable.

If the views I have expressed be right, we can think of our civilization evolving with the growth of knowledge from small wandering tribes to large settled law.

In recent times, European nations, with the use of gunpowder and other technical improvements in warfare, controlled practically the whole world. One, the British Empire, brought under one government a quarter of the earth and its inhabitants.

Much more quotes by John Boyd Orr below the page.

In the last fifty years science has advanced more than in the 2,000 previous years and given mankind greater powers over the forces of nature than the ancients ascribed to their gods.

The increase of territory and power of empires by force of arms has been the policy of all great powers, and it has always been possible to get the approval of their state religion.

Though the general principles of statecraft have survived the rise and fall of empires, every increase in knowledge has brought about changes in the political, economic, and social structure.

I just refer to myself as being Spirit, Mind and Body like everybody else and working toward the mastery of my natural divinity and the healing of my emotional mind.

Birth is the scariest event of most peoples' lives. You have to feel safe enough in your own mind before you can remember your own birth.

During one of my early seminars, there were a bunch of seminar junkies there.

It takes as much imagination to create debt as to create income.

I have this problem in the rebirthing community because it's so powerful sometimes, I get thrown out because people want to do things a certain way and they are just not open to new ideas, so they don't want me to come around.

I noticed every time I spent a lot of time in the bathtub, I would just get fantastic realizations about myself, and they were so valuable and liberating.

I was endorsed by many corporations to work with their people. Since I had several hundred successful case histories, I realized that it was really valuable and everybody should have access to the information, so I started teaching seminars to groups of people.

Personal law is simply the thought that controls your mind and your life more than any other thought. Finding that thought is the most valuable knowledge that you can have about yourself. It is like the leverage on personal change. It enables you to change very efficiently.

The average session takes about one to two hours. It's totally amazing because when a person breathes, they go through one stage of relaxation after another, and every stage releases tension.

Tags: After, Amazing, Another

The water was like a physiological stimuli to the subconscious that overwhelmed people with too much psychoanalytical material, you might say. People could do 10 breathing sessions without the water, and then they did breathing sessions in the water.