See the gallery for quotes by Lance Morrow. You can to use those 6 images of quotes as a desktop wallpapers. 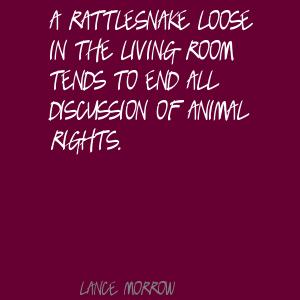 A rattlesnake loose in the living room tends to end all discussion of animal rights.

Everywhere you hang your hat is home. Home is the bright cave under the hat.

He vanished to the public in order to materialize for his family.

The Church became both more accessible and less imposing. It threw itself open to risk.

Vatican II was a force that seized the mind of the Roman Catholic Church and carried it across centuries from the 13th to the 20th.

As they marched, the crowds lining the route broke into applause, a sweet and deeply felt spontaneous pattering that was a sort of communal embrace. Welcome home.

Never forget the power of silence, that massively disconcerting pause which goes on and on and may at last induce an opponent to babble and backtrack nervously.

The real 1960s began on the afternoon of November 22, 1963. It came to seem that Kennedy's murder opened some malign trap door in American culture, and the wild bats flapped out.