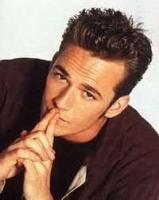 See the gallery for quotes by Luke Perry. You can to use those 7 images of quotes as a desktop wallpapers. 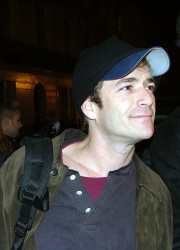 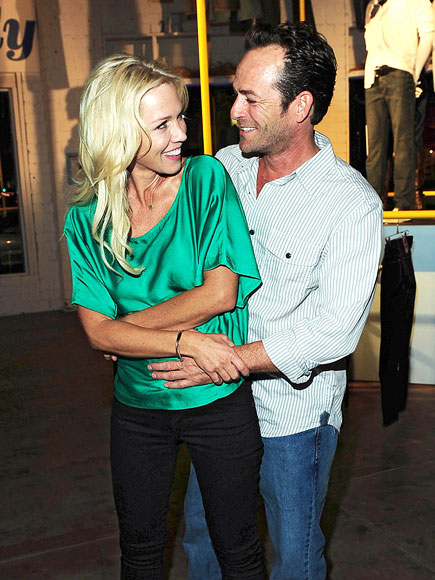 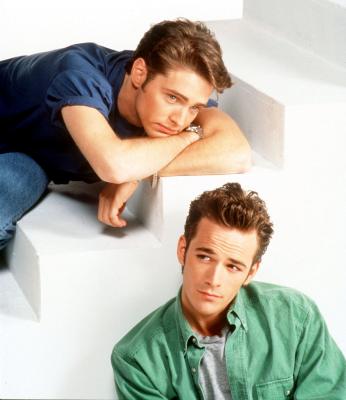 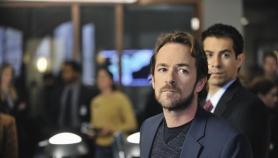 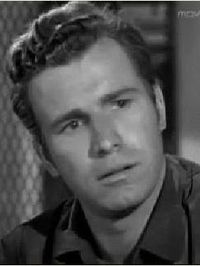 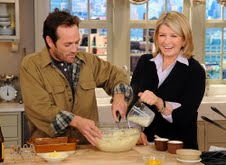 I've had tons of odd jobs, but I think that I would probably be a fireman because you get to see the results of your job. You get there and there is a house on fire. You leave and there's not a fire anymore.

It's hard and sometimes it's scary. It still amazes my mother. I went home for Christmas one year and there were fans all over the front lawn, hoping to see me.

I don't think what I have to say is that important.

I knew that I was going to do Westerns. I like 'em.

I open to anything... just about anything.

I think that sometimes kids use the show as a jumping off point for talking about things with their parents.

I'm not much of a matchmaker. I think people have to make their own choices and mistakes and all that stuff.

My high school was nothing like West Beverly High, let me tell you. I grew up in Fredericktown, Ohio.

When I was a kid, I was at a bowling alley and I ran into a soda machine. I still have the scar on my right eyebrow obviously.

Growing up in the Midwest, people don't drive Porsches and Ferraris. They drive Fords and Chevys. And so even if you have the opportunity to buy a more expensive car, it doesn't occur to you because it's not what you relate to.

I have a girlfriend, but I don't really want to talk about her. I won't name her. She isn't in show business, has nothing to do with it. So I'd rather just keep her out of it.

I was something of a prankster. One time I put a ski mask on my head and used a fake gun on the school secretary so that I could get some of my friends out of detention.

It was a fun film. I had a great time doing it. I was looking for a role just like that for my first movie role. I didn't want to have a starring role, because I wanted a chance to learn. I didn't want the whole thing riding on me.

There's a big difference between me and a real, legitimate working hand, or a world-champion rodeo cowboy. I play 'em, and I aspire to be like that, but those guys are tough.

When I was a kid, I just devoured TV 24 hours a day. Now that it's actually available 24 hours a day, I'm usually busy doing other stuff. But I do watch TV when I can.

There are two ways to go when you hit that crossroads in your life: There is the bad way, when you sort of give up, and then there is the really hard way, when you fight back. I went the hard way and came out of it okay. Now, I'm sitting here and doing great.

I used to be a real prince charming if I went on a date with a girl. But then I'd get to where I was likely to have a stroke from the stress of keeping up my act. I've since learned the key to a good date is to pay attention on her.

The key to sitcom success is miserable people. If you see a happy couple, it's just gone, like when Sam and Diane got together on Cheers.

I got sober because I was worried I was going to die next year.

I love the idea of 'the one' but I actually believe that there isn't a Miss Right. There are 12,000 Miss Rights out there and it's all timing.

I'm a sensitive guy. If you are a woman and you're in any kind of emotional duress and you write a song about it, I'll buy you album.

Much more quotes by Luke Perry below the page.

If there's a silence in a room I'll try to fill it as soon as humanly possible.

Well, I was lucky enough to be involved in about 19 failures at an early age, so I'm realistic about the success I'm having and how quickly it can go away. What's important is to be smart about it.

After I got my first laugh on stage, I was hooked.

As an actor, being on autopilot is the worst thing possible.

Chandler's the guy everybody thinks will do well with women, but he thinks too much and says the wrong thing.

I've just found out there are pages on the internet dedicated to whether I'm gay or not.

I can tell if someone is talking to me because I'm on 'Friends' or cause they just think I'm neat. You know I don't think I've ever spent more than five or ten minutes with somebody who was ogling me because they recognized me from the show.

Ninety percent of video game AI really is pretty damn bad. I think that's actually why it's so much fun to shoot things. Because the AI is so bad and the characters are so annoying.

The goal is to have to do the shot again because the camera guy shook a little bit as he was laughing. Without that happening, I'm not happy because there's nothing better for me than a world that everybody's just trying to make each other laugh.

Vicodin, I got addicted to that little pill. The reason I don't talk about it too much in the press is because it isn't funny, and I love to be funny in interviews. If you joke about that period in your life, it doesn't seem right.