See the gallery for quotes by Simon Hoggart. You can to use those 8 images of quotes as a desktop wallpapers. 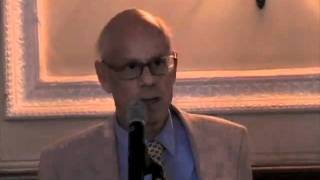 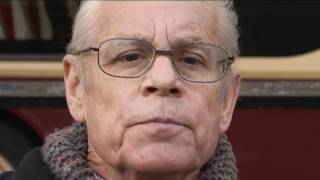 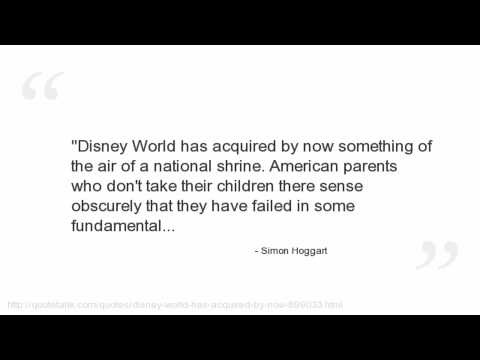 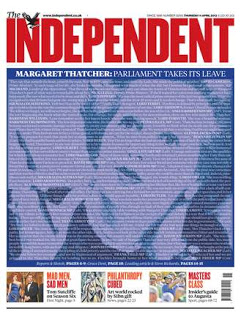 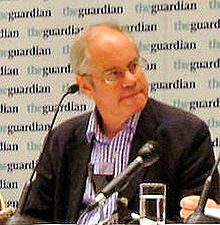 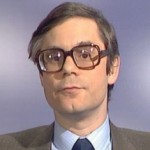 I think the great thing about grandparents is seeing another home, realising that people you love can have different priorities, different diversions, different opinions and lead quite different lives from the ones you see every day, and that is immensely valuable.

I think Tony Blair has to come down on one side or the other. You can't be a half-hearted supporter of the possible attack on Iraq. You're either with George Bush or you're against him.

Tags: Against, Him, Possible

I've been intrigued by 'Le Monde' ever since work took me to Paris once, and I noted that on a day when there was some huge worldwide story, the paper led its front page on some cabinet changes in Turkey. It implied a magnificent disdain for the quotidian folderol of mere news.

It's sad that the BBC is toning down Dennis the Menace for a cartoon series. He is losing his weapons, catapult and peashooter, will no longer pick on Walter the Softy, and his ferocious grimace is to be replaced by a charming, boyish smile.

Kind 'Guardian' readers have been forwarding me round robin Christmas newsletters for years now: lengthy missives full of perfect children, exotic holidays, talented pets and endless, tedious detail. The notes that accompanied them revealed they had inspired in the original recipients everything from mild irritation to absolute rage.

Life was so much simpler in pre-video days when everyone refused invitations because the 'Forsyte Saga' was on. Now we all just have a long list of unwatched shows, all of which, it seems, our friends are raving about. I feel as outdated as if I wore a Fair Isle sweater, ate Pot Noodle and had a two-bar electric fire in the sitting room.

Living in New York is like being at some terrible late-night party. You're tired, you've had a headache since you arrived, but you can't leave because then you'd miss the party.

My colleague Bill Keegan has written a very short book ('Saving the World?') on an unlikely topic - he is the first economist to try to rehabilitate Gordon Brown.

One of the pleasures of staying with friends is that you get to browse their shelves. I always arrive with a book, but I almost never read it. It would be like sitting at their dinner table and opening a packet of sandwiches.

'Sir' Richard Branson may be the Julian Assange of British business, in that both believe the world revolves around them. Hence Branson's decision to set up an air service between Manchester and London, above the route of the train line that's been taken from him.

Some government expenditure actually makes a profit. Our theatre leads the world. Loads of tourists must be attracted by the fact that you could spend a week in London doing nothing but visit superb museums and galleries, free.

The Tory party is like a rugby union match in which all 30 players are wearing the same strip. They're not sure who they are grabbing round the knees, but they're having a lot of fun doing it.

There are few tribes more loathsome than the American Right, and their vicious use of the shortcomings in the NHS to attack Barack Obama's attempts at health reform are a useful reminder.

To be fair to the Inquisition, they only used confessions extracted after the torture had ended, which let them claim that admissions had been freely given; the fact that the torture would have started again if they hadn't confessed was a minor detail.

Watching the Commons tribute to Margaret Thatcher was like being suffocated inside a gigantic sticky toffee pudding, but one with nasty bogeys planted inside. There was much of the 'Margaret Thatcher who was lucky enough to know me,' especially from her own side of the House.

We 'Guardian' columnists ought to have a line of collectibles fit for soggy liberals. A poncho to stop us being dripping wet, reversible so we can have it both ways. A cap marked 'I ♥ all forms of diversity.' Gloves, the left embroidered 'On the one hand' and the right, 'On the other.'

We all have our opinions. But I suspect that writers are actually less worth heeding, because they regard themselves as so uniquely important, so culturally sensitive.

Tags: Less, Themselves, Worth

What has always puzzled me is the flexibility of God's word. For instance, Catholics can now eat meat on Fridays. And limbo has been abolished. How does this work? Who tells them?

What puzzles me is the way that some of the smaller, unknown chateaux imagine that because Chinese millionaires pay ludicrous sums for the great names, they can overcharge for their own inferior fluids. There is no trickledown effect in wine prices.

When I was collecting material for a political gossip column, and someone said something interesting, I would wait for them to add, 'and I don't want to read that in your magazine!' In which case I wouldn't use it. But if they didn't remember to say it, I'd nip off to the loo, write the story up, come back and change the subject.

When people move from one extreme set of views to embrace another equally batty picture of the world, they expect us to applaud their choice, as if the fact that they have rejected one form of nuttiness somehow validates the screwball views they hold now.

When you visit a foreign city you are in it, but not of it, separated by a glass wall. Once, while a student, I was getting dressed in my ground-floor room when a family of Italians crossed the grass to watch, as if I were laid on for their amusement and instruction.

Tags: Family, Getting, Once

I know of no wars started by anyone to impose lack of religion on someone else. We have lethal Sunni v Shia, Catholic against Protestant, but no agnostic suicide bombers attack crowded atheist pubs.

Tags: Else, Religion, Someone

While it is entirely untrue that Canadians lack a sense of humour, the funniest ones tend to head south: Dan Aykroyd, Jim Carrey, Michael J. Fox.

Americans are fascinated by their own love of shopping. This does not make them unique. It's just that they have more to buy than most other people on the planet. And it's also an affirmation of faith in their country.

Much more quotes by Simon Hoggart below the page.

The British are the last national group who can be insulted by Hollywood without any comeback. These days if you depict Italians as gangsters, Saudis as terrorists or Mexicans as violent drug dealers you'll never hear the end of it. But as still the largest - and possibly the richest - ethnic group in the States, the British just have to take it.

Even I would find a book about my life pretty dull.

I've served on five different juries, and many of them were bonkers in their own way.

If you read the 'Daily Mail,' you would imagine that the British middle classes lead lives of unremitting misery.

In Washington, success is just a training course for failure.

Poor Harper Seven Beckham, having to live with that name all her life. It's the Boy Named Sue syndrome; at the very least it will toughen her up.

Remember how Margaret Thatcher came to believe that abroad was more important than at home? Didn't do her much good.

She is the first head of government in history to give a whole country its second childhood.

Switzerland still has a huge share of the watch market, all advertised at the airport on illuminated hoardings. Gosh, they are ugly.

The Chinese do make vast quantities of wine for home consumption, but you wouldn't want to drink it yourself.

When you actually see Barack Obama, it's startling how slight he is and how young he looks.

A married vicar is likely to regard his vocation as a job - a tough and ill-paid one, to be sure - but a priest is seen as a pillar of the community, answerable only to his parishioners and his God, rather than to a wife and children.

All over the U.S. there are people whose lives are being destroyed for lack of proper health care provision, and there is no sight more odious than the rich, powerful and arrogant trying to keep it that way.

Corney & Barrow are proud to have the royal warrant, meaning that they provide the Palace with some of the greatest - and necessarily most expensive - wines from around the world. I am pleased to say that they also hold my own warrant, for providing exceptional wines at - surprisingly - modest prices.

Denis Healey refused to contribute an article to the 'Guardian' about his intentions, and was punished by the electorate - and then all Labour MPs - for his presumption in assuming they already knew everything about him. He became famously the best prime minister we never had. Perhaps.

During my own gap year, I learned an invaluable lesson - that I was a lousy teacher. Even though the children I 'taught,' in upcountry Uganda, were desperate for qualifications, they largely ignored me. Until, that is, I realised that they wanted to hear about other young persons around the world.

Every time humanists try to get a slot on 'Thought For the Day' on Radio 4, they are told it's reserved for 'the faith community,' whatever that is. Yet 'TfT' is almost always pabulum about how God wants us all to love each other and care for the unfortunate. I'm sure humanists would say much the same, without God.

I also learned to play Fruit Ninja on an iPad. It is quite hypnotic, and I hope one day to get past 100 points. I remembered that David Cameron admits to being an addict. I wonder if it helps him in his work. 'Great, just destroyed a pineapple! Reminds me, shall we send those grenades to the Syrian rebels?'

I cannot be alone in being pretty nauseated by Red Nose Day, or at least its television manifestation. Do I think that wretchedly poor children in Africa should get food and life-saving drugs? Of course. Do I want to be hectored into contributing by celebrities who earn more in a 10-minute slot than many of these families get in a year? Nope.