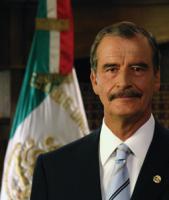 See the gallery for quotes by Vicente Fox. You can to use those 8 images of quotes as a desktop wallpapers. 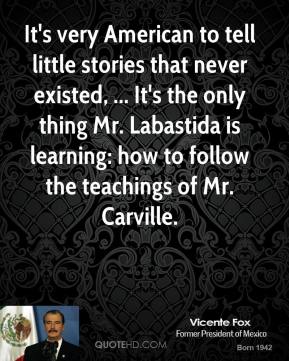 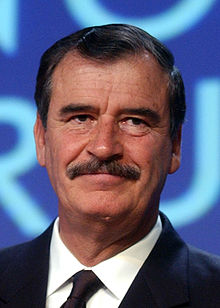 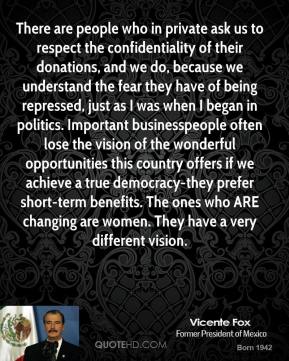 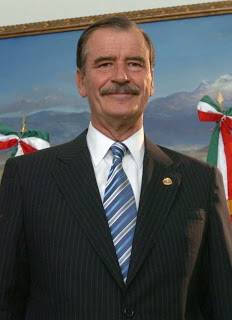 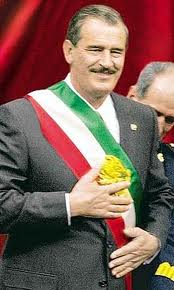 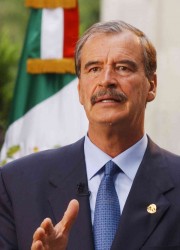 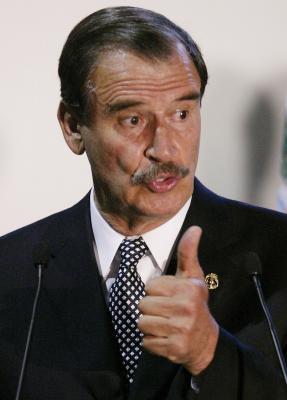 I believe Mexico should dedicate 100% of its oil revenues to developing human capital and technological development. None of us politicians should be able to touch that money.

I believe that work can be done on security; in combating terrorism in Mexico we have done our part in this area. But at the same time, the world must continue working.

I have decided to fight for my country, because we have build a success story in Guanajuato, with real results and more yet to come in the next two years.

I mean, we must act with intelligence. We must work on this framework, so that immigration becomes an asset to both nations. Believe me, what - just the Mayor Bloomberg said here in New York, that this city would be stopped, totally stopped if it were not by the immigrants working here.

I part of this great nation because my grandfather was born here, in Cincinnati, Ohio. He took a horse, back in 1895, and ride it all the way down to Guanajuato, looking for his American dream. No penny in his pocket, only dreams in his head. And he was an immigrant coming from the States into Mexico. And he found his American dream in Mexico.

I think one purpose is very clear among corporations and business leaders: make profits, deliver high return for stockholders, conquer markets, service consumers and create jobs. But in today's world, demands from corporations and leaders are much more than that. We need to understand what people really want at the very end.

I think that in Mexico, we must change some practices that were built during the 72 years of predominance in Mexico. Former presidents would just hide away, run away or disappear. And I think it's key in a democracy that presidents face people, see eye to eye to citizens and work to keep on contributing to the - to Mexico.

Mexico is the only country in the world that has a trade agreement with United States and Canada, and at the same time has one with Europe. These are the two largest markets in the world. By the same token, Mexico has one of the most open economies.

Obama is thoroughly mixed up with all these things he's got. He's got to solve Libya. He's got to solve Afghanistan. He's everywhere. And this nation, I don't know why it's not showing the leadership and capacity to attend different issues at the same time.

On one side, citizens have great respect for the United States; they have a great feeling of friendship. That is solid. But in the opposition and in the political arena I often find criticism of the closeness of relations with the United States. That is a reality.

So if Arizona sees the federal government isn't assuming its responsibilities, it creates local laws. But migration and keeping security on the borders is not a local or state issue, it's a federal issue.

The job of president is to motivate, to inspire, to be side by side with people making sure that they develop all their capacities and that I remove all the obstacles they have to grow by themselves.

The real end winner of NAFTA is going to be Mexico because we have the human capital. We have that resource that is vital to the success of the U.S. economy.

There's no doubt that Mexican men and women full of dignity, willpower and a capacity for work are doing the work that not even blacks want to do in the United States.

To me, governing is communicating. That facilitates the whole job because I can listen, I can hear what people have to say, and at the same time I can let them know what are we working on, what is our strategic line, and where are we going.

We are a nation in which freedom is alive in the squares and streets, in the daily work of the communications media, in the open relationship between the governing and the governed.

We need to be aware of what we are capable of first and realize that if you place your dreams really really high, you do have the potential to get to that level.

What Mexicans want and aspire to, is to go there and work temporarily and raise some money and come back home. That's what they want, so nobody's asking for those two, three million Mexicans that are illegally in the United States to become American citizens.

What nourishes us at home and in school is what inspires us. When we get awareness and learn about the great potential that we all human beings have, we are able to discover our leadership.

You may count on Mexico's support, since your commitment to the noblest causes of mankind and your vast experience are and will be invaluable in enabling us, together, to achieve a better world.

Tags: Experience, May, Together

Instead of building walls, we should be building bridges.

Always, in every human action, there are leaders.

And I like to convey my feelings, my emotions, my experience, the information I have to public use, public opinion.

Much more quotes by Vicente Fox below the page.

By dedicating so much concentration to the issue of security, bilateral matters pass to a secondary level.

Every idea has its time.

Fortunately, I have money that's from my life's work. But it's money that I share and used greatly to fight poverty in my country.

I am an honest person, transparent, that look citizens straight in their faces.

I am the guardian of power, not its owner.

I think it's very important that the United States keeps out of the local electoral process in Mexico.

I think there's a big misunderstanding on the value of migrants.

If we can put together a Mexican businessman and a U.S. businessman, they will find a way to do more business.

Let me tell you that I love the United States.

Mexico doesn't deserve what has happened to us. A democratic change is urgent, a change that will permit us to stop being a loser country.

No doubt I enjoy being close to people in the way I dress, the way I speak, and the way I communicate with people.

Our number one priority is to spend every peso possible to include those who are currently excluded.

President Obama is committed to Hispanics and migrants.

Prohibition didn't work in the Garden of Eden. Adam ate the apple.

The army should go back to their assigned duties, and police should take the responsibility of fighting the cartels.

Usually Mexico, or always Mexico has defended itself and its territory.

We are not going to build a pressure in Mexico. We're not building walls to retain our people.

We would betray Mexicans' hopes for change if we felt satisfied with what we've accomplished so far.

As long as they are working, they should be legalized. I admire so much each and every migrant. They are the most loyal workers in the U.S. economy. They build the homes of those who are attacking them.

At the very end, what is going to happen is that immigration will be reduced considerably. And how can we get to that stage? By agreements on sectors.

Change will not come from above, it will come from below, from the small and medium size businesspeople. They do dare to show their faces. They applaud us and help us financially.