See the gallery for quotes by Ben Kingsley. You can to use those 6 images of quotes as a desktop wallpapers. 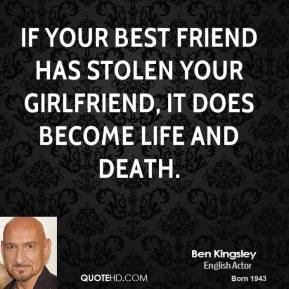 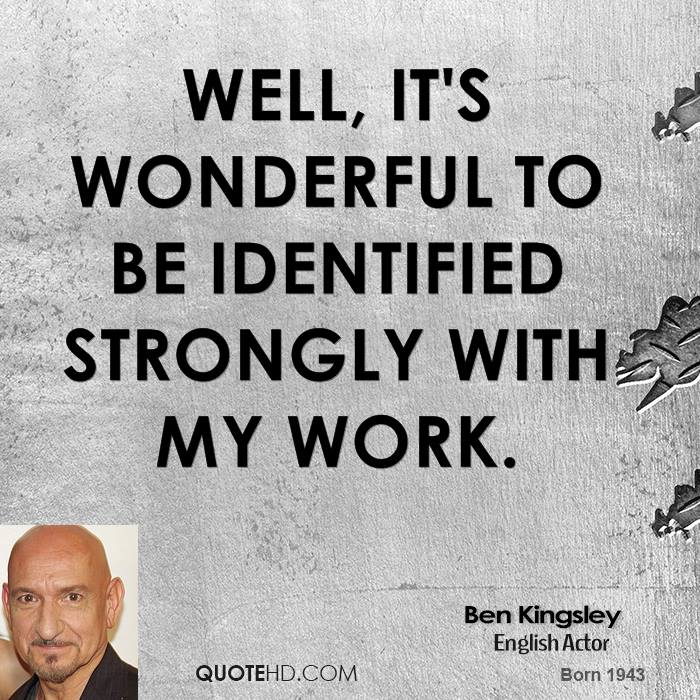 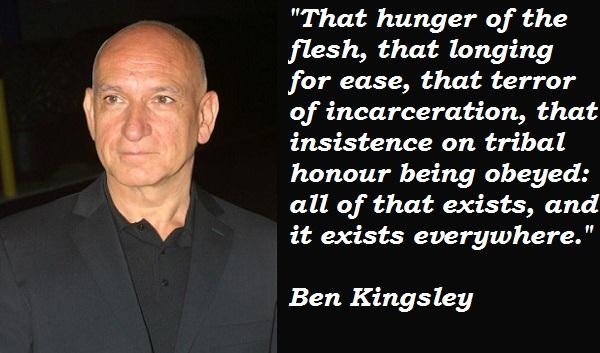 I'm convinced that had I not changed my name, I don't think I would have had quite the same career curve that I eventually had.

I've never had to turn my hand to anything for monetary gain, other than pretending to be somebody else. I'm deeply fortunate.

Tags: Else, Pretending, Somebody

In cinema, the leading player is the director.

In England, it's now Sir Ben. Mister has just disappeared. It's not even on my passport anymore. They've taken Mister away from me.

It is better for me to serve a charity as an actor or a voice, rather than at a luncheon being just a celebrity.

John Lennon and Ringo Starr liked my songs. I used to write songs and they heard me sing songs on stage in London.

The hierarchy of class in London was rigid. It was like a religion. It still is to a certain extent.

The many many imponderables come together when a film opens and for all sorts of reasons it may or may not succeed.

Tags: May, Succeed, Together

The trick is to try and justify every word on the page and make sure my character is the man who would say that.

There have not been any troughs as regards my work. There's never been a trough of my assurance.

There is so much to do on a film set. It is an extraordinarily invigorating and wonderful place to be, when things are running well.

There was one titanic guiding light on the film set, and I was in the presence of a true Mahatma, in the deepest and most profound sense of the word.

There's so much crap talked about acting.

Well, it's wonderful to be identified strongly with my work.

When you drop your guard in films, the acting process compensates. You get lazy and you start acting.

With narration, you have to be very accurate with your voice. It's a good exercise to do.

Hopefully, as I get older in the business, I make my choices more accurately, and I perhaps know from either the script or the first meeting that it isn't going to work.

I do remember, as a child, that I always imagined, when I was maybe 6 or 7, my fantasy was that everywhere I went I was being followed by an invisible film crew.

I think that all of us either lose touch with the child inside us or try and hold onto it because it so precious to us and it's such an extraordinary part of our lives.

Much more quotes by Ben Kingsley below the page.

I think that various styles and methods and approaches are an invention of people who don't understand the process of acting and who try very hard to label things.

I think that you can fall into bad habits with comedy... It's a tightrope to stay true to the character, true to the irony, and allow the irony to happen.

That hunger of the flesh, that longing for ease, that terror of incarceration, that insistence on tribal honour being obeyed: all of that exists, and it exists everywhere.

The camera does not like acting. The camera is only interested in filming behaviour. So you damn well learn your lines until you know them inside out, while standing on your head!

When Attenborough asked me to do Gandhi it was almost like stepping off one boat and stepping on to another, even though both boats are going at 60 miles per hour.

Tags: Another, Both, Off

When I choose a role it's either because I recognise the man, or that I'm very curious to know him. If I neither recognise nor know him, then it is better that I don't play him.

Tags: Choose, Either, Him

One of the greatest things drama can do, at it's best, is to redefine the words we use every day such as love, home, family, loyalty and envy. Tragedy need not be a downer.

I just loved playing a man who was unafraid of making an idiot of himself in the process of falling in love. I found that admirable.

If your best friend has stolen your girlfriend, it does become life and death.

I always try to find something I admire about every character I play.

I'm very in love with the fact that the camera is revolted by acting and loves behaviour.

All the great writers root their characters in true human behaviour.

As a singer, I might have fallen among thieves. I wonder if I'd still be alive by now.

As an actor there's no autonomy, unless you're prepared to risk the possibility of starving.

But comedy I'd love to do as much as humanly possible.

But filming is good for you, because the crew isn't allowed to laugh. You can't get addicted to getting the laugh.

Fifteen years before I became a screen actor, I was in the theatre. A lot of my work was comedy, which I loved doing. It's harder.

Filming is so much to do with rhythm, as is music, and if it isn't there then you know in the end nobody can save it really, they can't.

Hamlet is an astonishing intelligence.

I don't honestly think people know what acting is.

I have a rather naive approach, I think, to my job.

I have never felt bereft of anything.

I honestly have no strategy whatsoever. I'm waiting for that script to pop through the letterbox and completely surprise me.

I think I'm more bonded, emotionally and in a craft sense, to films that tell extraordinary stories about extraordinary destinies.

I think if I were to go back on stage I might be in great danger of acting.

I think Romeo and Juliet is uplifting. That's how much a son wishes to avenge his father. That is how much two young people can love each other.

I try and reduce myself to an almost blank slate and hope to God that I am creative.

I was fortunate as a young actor, to go straight to the RSC, where I learned that being an actor can bring with it wonderful responsibilities.

I would like to make it known, on this program, loud and clear, that I would absolutely embrace with all five of my arms being a Bond villain.