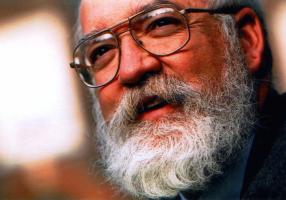 See the gallery for quotes by Daniel Dennett. You can to use those 8 images of quotes as a desktop wallpapers. 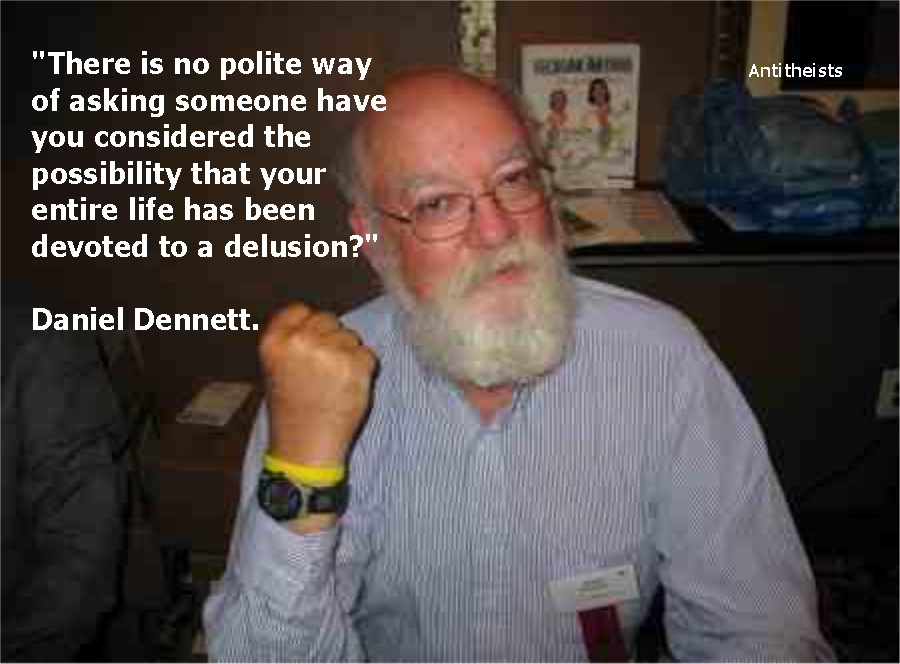 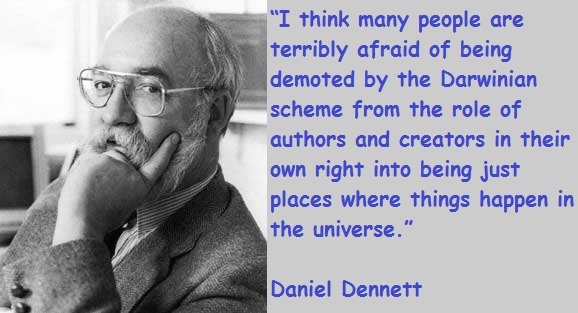 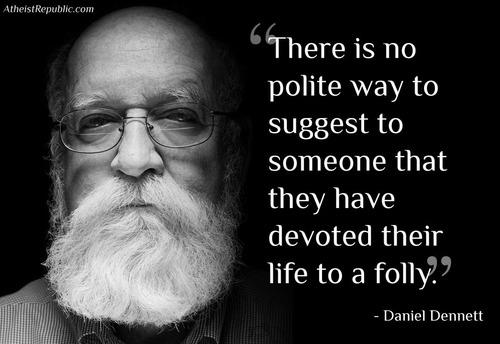 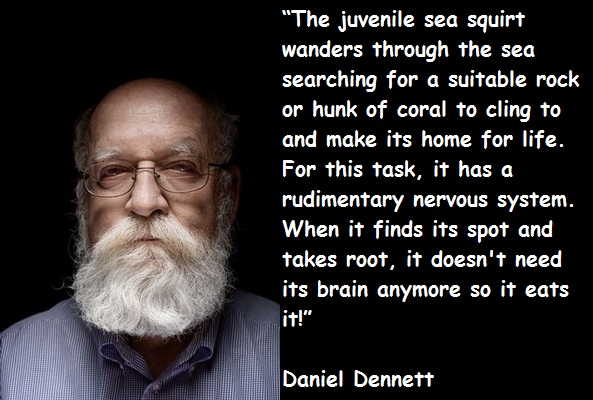 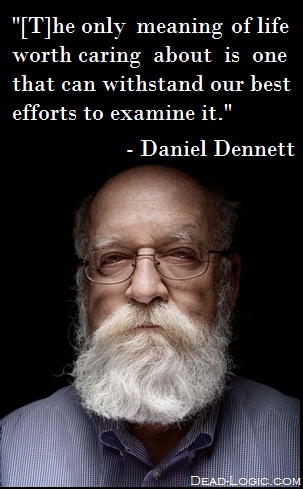 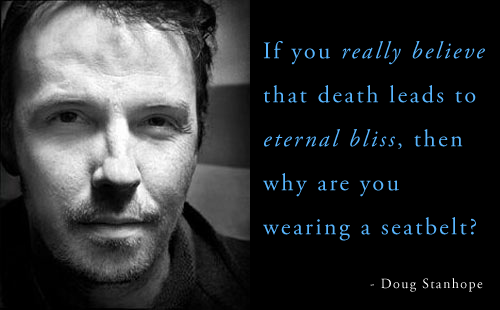 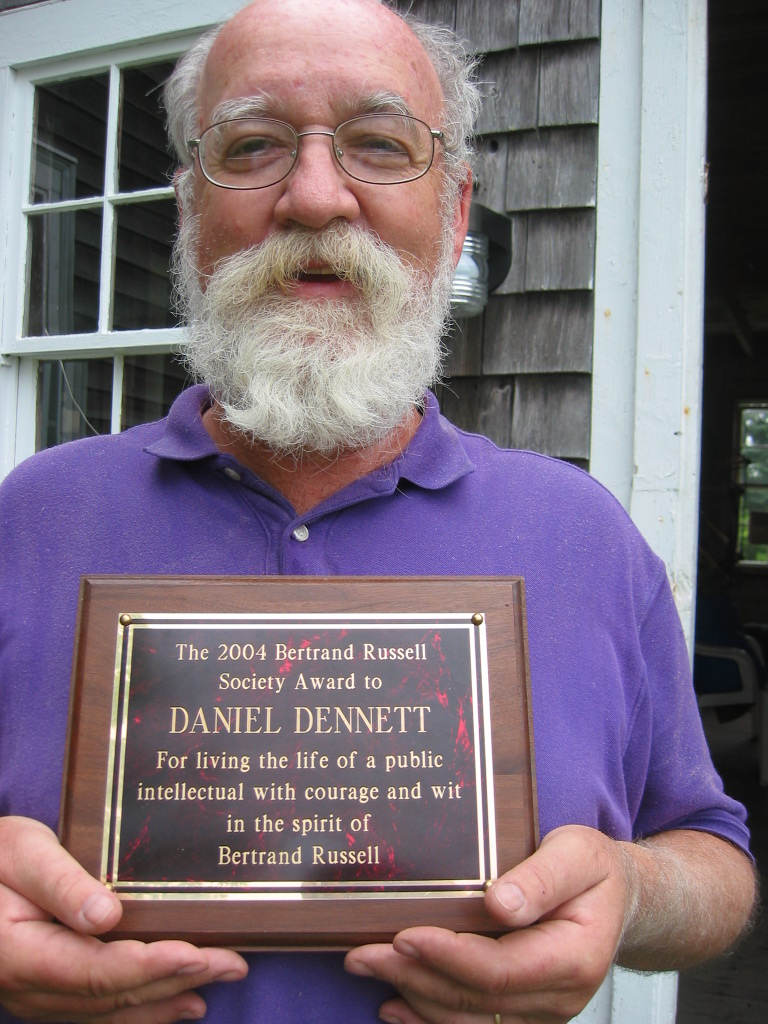 The secret of happiness is: Find something more important than you are and dedicate your life to it.

The juvenile sea squirt wanders through the sea searching for a suitable rock or hunk of coral to cling to and make its home for life. For this task, it has a rudimentary nervous system. When it finds its spot and takes root, it doesn't need its brain anymore so it eats it!

Darwin's idea of natural selection makes people uncomfortable because it reverses the direction of tradition.

Natural selection is not gene centrist and nor is biology all about genes; our comprehending minds are a result of our fast evolving culture.

Some of the greatest, most revolutionary advances in science have been given their initial expression in attractively modest terms, with no fanfare.

I don't think the 9/11 attacks taught us anything we didn't already know about religion. It has long been obvious - even to the deeply religious - that religious fanaticism is an extremely dangerous deranger of otherwise sane and goodhearted people.

A child raised on a desert island, alone, without social interaction, without language, and thus lacking empathy, is still a sentient being.

Human freedom is not an illusion; it is an objective phenomenon, distinct from all other biological conditions and found in only one species - us.

The mind is the effect, not the cause.

As every scuba diver knows, panic is your worst enemy: when it hits, your mind starts to thrash and you are likely to do something really stupid and self-destructive.

I think many people are terribly afraid of being demoted by the Darwinian scheme from the role of authors and creators in their own right into being just places where things happen in the universe.

If the history of resistance to Darwinian thinking is a good measure, we can expect that long into the future, long after every triumph of human thought has been matched or surpassed by 'mere machines,' there will still be thinkers who insist that the human mind works in mysterious ways that no science can comprehend.

In 50 years - or 20 years, or 200 years - our current epistemic horizon (the Big Bang, roughly) may look as parochial as the horizon Newton had to settle for in his day, but no doubt there will still be good questions whose answers elude us.

In short, we need to recover the courage we celebrate in our heroes, and in particular, the courage to tolerate, for the sake of a free society, a level of risk we hardly ever imagined in the past.

Now that mobile phones and the internet have altered the epistemic selective landscape in a revolutionary way, every religious organisation must scramble to evolve defences or become extinct.

Some cultural phenomena bear a striking resemblance to the cells of cell biology, actively preserving themselves in their social environments, finding the nutrients they need and fending off the causes of their dissolution.

Tags: Off, Social, Themselves

The problem is that no ethical system has ever achieved consensus. Ethical systems are completely unlike mathematics or science. This is a source of concern.

There is no reality of consciousness independent of the effects of various vehicles of content on subsequent action (and hence, of course, on memory).

We adore babies because they're so cute. And, of course, we are amused by jokes because they are funny. This is all backwards. It is. And Darwin shows us why.

We should get used to the idea that we'll probably never be able to find - and confirm - a good explanation of the ultimate origin of the universe, though I see no reason to believe that we can't press much further on this question than we have managed to date.

Wherever there is a design that is highly successful in a broad range of similar environments, it is apt to emerge again and again, independently - the phenomenon known in biology as convergent evolution. I call these designs 'good tricks.'