See the gallery for quotes by Fritz Kreisler. You can to use those 7 images of quotes as a desktop wallpapers. 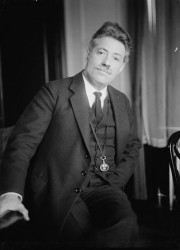 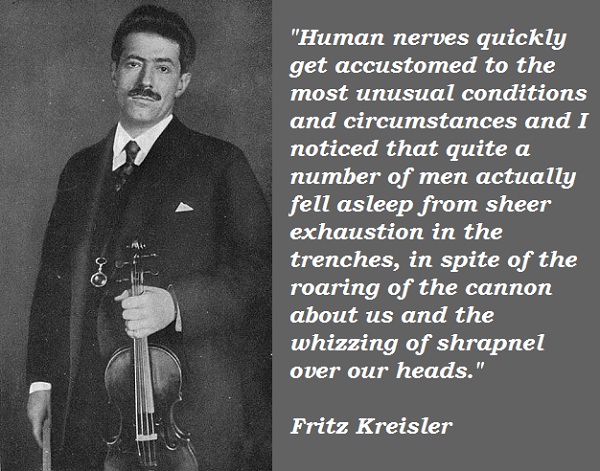 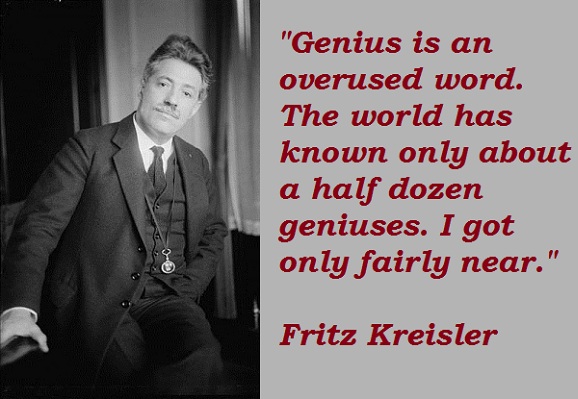 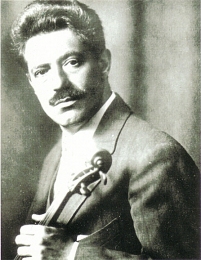 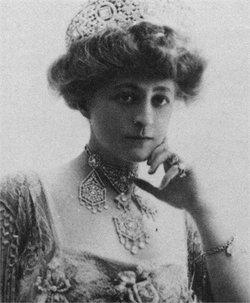 Genius is an overused word. The world has known only about a half dozen geniuses. I got only fairly near.

Life that only a few hours before had glowed with enthusiasm and exultation, suddenly paled and sickened.

The outbreak of the war found my wife and me in Switzerland, where we were taking a cure.

Although I had resigned my commission as an officer two years before, I immediately left Switzerland, accompanied by my wife, in order to report for duty. As it happened, a wire reached me a day later calling me to the colors.

Human nerves quickly get accustomed to the most unusual conditions and circumstances and I noticed that quite a number of men actually fell asleep from sheer exhaustion in the trenches, in spite of the roaring of the cannon about us and the whizzing of shrapnel over our heads.

I saw a great many men die afterwards, some suffering horribly, but I do not recall any death that affected me quite so much as that of this first victim in my platoon.

IN trying to recall my impressions during my short war duty as an officer in the Austrian Army, I find that my recollections of this period are very uneven and confused.

My wife volunteered her services as Red Cross nurse, insisting upon being sent to the front, in order to be as near me as could be, but it developed later that no nurse was allowed to go farther than the large troop hospitals far in the rear of the actual operations.

One gets into a strange psychological, almost hypnotic, state of mind while on the firing line which probably prevents the mind's eye from observing and noticing things in a normal way.

Signs of fatigue soon manifested themselves more and more strongly, and slowly the men dropped out one by one, from sheer exhaustion. No murmur of complaint, however, would be heard.

Suddenly, at about ten o'clock, a dull thud sounded somewhere far away from us, and simultaneously we saw a small white round cloud about half a mile ahead of us where the shrapnel had exploded. The battle had begun.

The moral effect of the thundering of one's own artillery is most extraordinary, and many of us thought that we had never heard any more welcome sound than the deep roaring and crashing that started in at our rear.

We started at once to dig our trenches, half of my platoon stepping forward abreast, the men being placed an arm's length apart. After laying their rifles down, barrels pointing to the enemy, a line was drawn behind the row of rifles and parallel to it.

What impressed me particularly in Vienna was the strict order everywhere. No mob disturbances of any kind, in spite of the greatly increased liberty and relaxation of police regulations.

I read what I like to write: romantic suspense. I also love thrillers and novels of suspense, but I can't handle extreme violence and torture.

The concept of psychic energy is easy for most people to imagine. After all, it's just one step beyond intuition - and almost everyone is comfortable with the idea of intuition.

Tags: After, Energy, Everyone

The negative attitudes toward the genres - romance, science-fiction, westerns, suspense, etc. - are fallout from the academic world's long-standing fascination with existential philosophy and modern theories of psychology and sociology.

Trust me, I did not set out to establish three pen names and, for the record, I do not recommend it as a career strategy. The idea back at the start was that I would stick with the name that proved most successful.