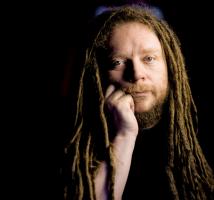 See the gallery for quotes by Jaron Lanier. You can to use those 7 images of quotes as a desktop wallpapers. 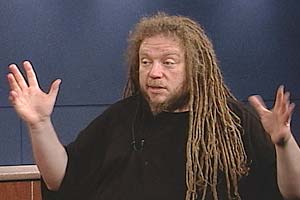 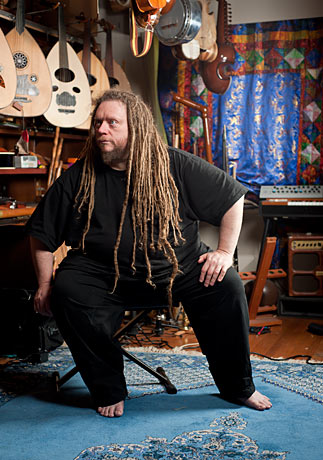 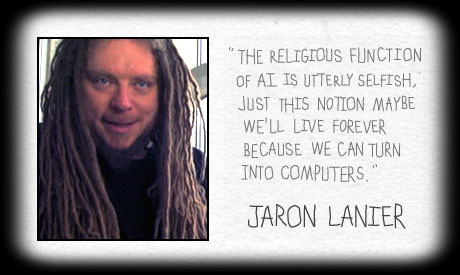 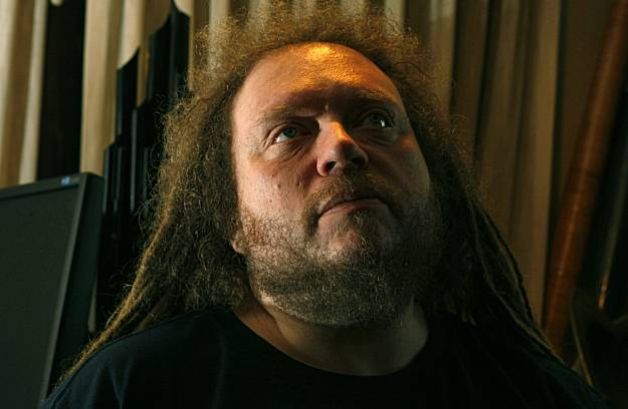 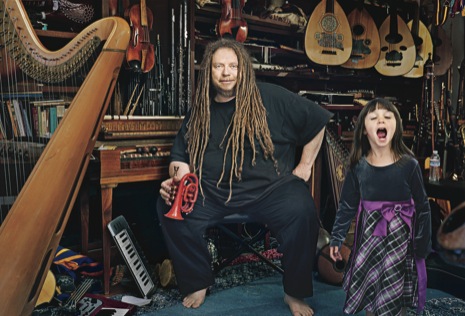 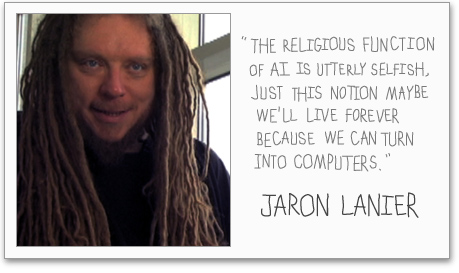 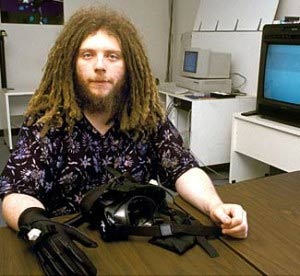 Technologists provide tools that can improve people's lives. But I want to be clear that I don't think technology by itself improves people's lives, since often I'm criticized for being too pro-technology. Unless there's commensurate ethical and moral improvements to go along with it, it's for naught.

The basic problem is that web 2.0 tools are not supportive of democracy by design. They are tools designed to gather spy-agency-like data in a seductive way, first and foremost, but as a side effect they tend to provide software support for mob-like phenomena.

The interesting thing about advertising is that the things that annoy us sometimes about it are really human. It's us looking at ourselves - and like all human endeavors it's imperfect.

Much more quotes by Jaron Lanier below the page.

The mass culture of childhood right now is astonishingly technical. Little kids know their Unix path punctuation so they can get around the Web, and they know their HTML and stuff. It's pretty shocking to me.

The wisdom of crowds works when the crowd is choosing the price of an ox, when there's a single numeric average. But if it's a design or something that matters, the decision is made by committee, and that's crap. You want people and groups who are able to think thoughts before they share.

Web 2.0 ideas have a chirpy, cheerful rhetoric to them, but I think they consistently express a profound pessimism about humans, human nature and the human future.

If you're old enough to have a job and to have a life, you use Facebook exactly as advertised, you look up old friends.

When you have a global mush, people lose their identity, they become pseudonyms, they have no investment and no consequence in what they do.

Advertising is the edge of what people know how to do and of human experience and it explains the latest ways progress has changed us to ourselves.

Human beings either function as individuals or as members of a pack. There's a switch inside us, deep in our spirit, that you can turn one way or the other. It's almost always the case that our worst behaviour comes out when we're switched to the mob setting. The problem with a lot of software designs is that they switch us to that setting.

Mobs and dictators were made for each other, and when mobs appear, dictators will soon flourish.

Writing and thinking is not economically sustainable.

Advertisers are not thinking radically enough - they look for technology to lead instead of trying the neuroscience approach and thinking about what parts of the brain haven't been activated before. These new experiences bring new capabilities to the brain.

I'm astonished at how readily a great many people I know, young people, have accepted a reduced economic prospect and limited freedoms in any substantial sense, and basically traded them for being able to screw around online.

We're losing track of the vastness of the potential for computer science. We really have to revive the beautiful intellectual joy of it, as opposed to the business potential.

A remarkable thing about the Silicon Valley culture is that its status structure is so based on technical accomplishment and prowess.

After my mother's death, I had such difficulty relating to people.

An intelligent person feels guilty for downloading music without paying the musician, but they use this free-open-culture ideology to cover it.

Governments oppress people, but so do mobs. You need to avoid both to make progress.

I do real paintings, you know. I'm a little messy in the studio, so I'm a bit of a danger. But I just adore it.

I think complexity is mostly sort of crummy stuff that is there because it's too expensive to change the interface.

I think most of the dramatic new ideas come from little companies that then grow big.

I'm an advocate of human nature.

I'm not in any sense anti-Facebook.

I've occasionally been wrong about certain things, which is in a way more delightful than being right.

It is impossible to work in information technology without also engaging in social engineering.

My parents were kind of like me in that they had tons and tons of weird, amazing stuff.