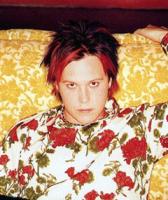 See the gallery for quotes by Jon Crosby. You can to use those 8 images of quotes as a desktop wallpapers. 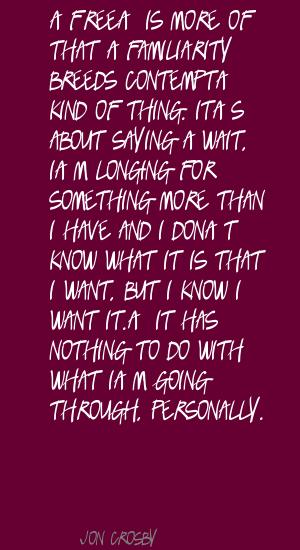 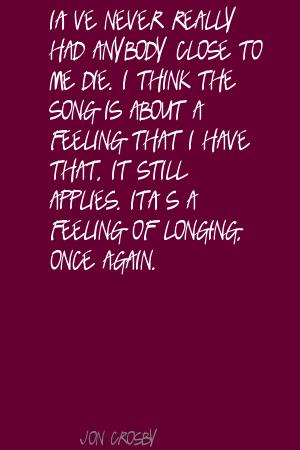 We were number one most added at radio, when the single came out and that's much different. It took like eight months for any radio to happen on the first record, so a lot more support has happened right out of the box.

We're making this huge changeover from underground to more mainstream audiences. I don't know if we could ever repeat this type of feeling. We're really excited.

You can lose people without them dying, and I have, from moving, from traveling. The emotion is real, it just doesn't actually have to do with death. I'm singing about what I know, and it's a song about longing for somebody who's disappeared in your life.

'Free' is more of that 'familiarity breeds contempt' kind of thing. It's about saying 'Wait, I'm longing for something more than I have and I don't know what it is that I want, but I know I want it.' It has nothing to do with what I'm going through, personally.

At least the rap metal stuff is good, but it's not really my bag. I've been listening to the radio since we've been touring the past month, because we don't get it most of the time.

I've never really had anybody close to me die. I think the song is about a feeling that I have that, it still applies. It's a feeling of longing, once again.

I didn't want the record to be cold and I don't think it's cold at all. I felt it was very people oriented.

I don't trust the Bee Gee's because there's no way they could always be happy.

I need to reach a lot of people to sell records.

I need to think about 'Make sure you drink your water.' That's the kind of person I am.

I think stuff on the radio is mostly good, but it's just not what I'm into. I'm not into rap metal.

I wanted to do that again but, when I went to look for chants, I didn't want to do it in the exact same way.

It's a very nice thing to be able to give joy to people.

Sometimes you sing songs about the way you want to feel more than the way you actually do feel.

I feel that I want what allows me to reach the largest number of people as possible, and I don't feel ashamed of that. I think I'm the kind of artist that's meant to be on a major label because my music is different.

I guess lyrically they're similar because they're talking about escaping the kind of misery that likes company. 'The Last One Alive,' for me, is very simple. It's just about alienation, really, that causes anger.

I think any band we played with would be a weird match. We're on our own, a little out there, but it's a good thing. I think we're complimentary to each other.

I think it would be very scary and very confusing if I didn't understand where people are coming from, but I've felt the exact same way for so many other bands, growing up. It's not really a big deal.

I think things can have more than one meaning and still connect with people. There's a lot of meaning to the title 'Music For People' and they're all true and they're all accurate.

I want to do a collaboration or some kind of side thing or some soundtrack work. Because I've been doing this for years and years. I'd like to just step out and try something different.

I'm really happy with Elektra, I don't have anything bad to say about them at all. I always knew a major label was the right place for me to be. I never really had an opportunity to go to an independent label anyway.

It definitely seems like we are connecting with people, which is nice, because I've had a lot of music do the same for me. It's not like I don't I understand why we get the reactions we do.

It doesn't really seem any different anywhere. I'd say it seems like we're biggest in Australia. It's just that we've always been this underground band and for some reason in the last month has been starting to go overground.

Just having the pain of being alive without anything else, whether it's good or bad. There's a lot of serious songs on the record, you know. That song is just about feeling like a fish out of water, feeling like you don't belong on the planet sometimes.

So I think it was a good thing It was a little surreal watching Leo scream 'I'm not going to die today!' with our music playing - that was the last thing on my mind when I wrote the song.

The audience that surprised us the most was definitely Paris, when we played there last. They were just incredibly into us and we weren't expecting it at all.

Much more quotes by Jon Crosby below the page.

The two records are very different. I guess, on the second record, that's more where I was at. Its not that I'm more well-adjusted or anything, it's just that what I wanted to sing about maybe was more the way I wanted to feel.

We used to go and play shows in the south in front of two people and now every show we did was just great. The warm-ups, most of those weren't even advertised and most of them were sold out. I don't know what's going on, it's just so much different than it used to be.