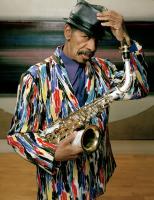 See the gallery for quotes by Ornette Coleman. You can to use those 7 images of quotes as a desktop wallpapers. 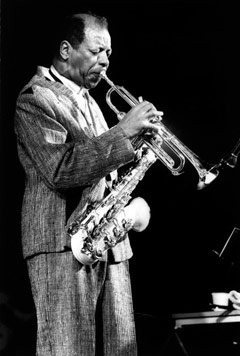 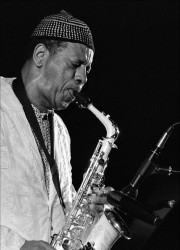 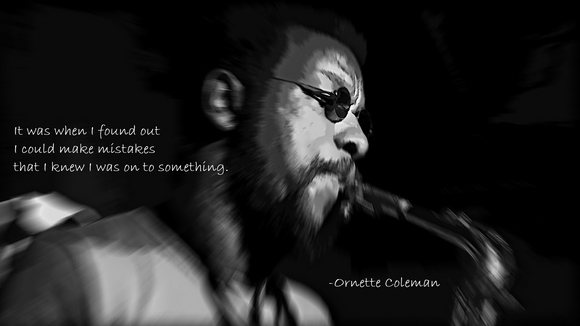 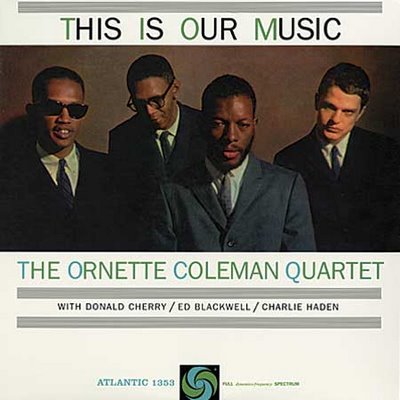 It's just someone has labelled us as having a different label to do what you do. I find that labels are the worst thing in the world for artistic expression.

No one has to learn to spell to talk, right? You see a little kid holding a conversation with an adult. He probably doesn't know the words he's saying, but he knows where to fit them to make what he's thinking logical to what you're saying.

That's what I was trying to say when we were talking about sound. I think that every person, whether they play music or don't play music, has a sound - their own sound, that thing that you're talking about.

That's why I haven't been so anxious. But now, lots of people write and say, 'I want to find out what you're doing.' So I know that this book will enlighten them.

I remember once I read a book on mental illness and there was a nurse that had gotten sick. Do you know what she died from? From worrying about the mental patients not being able to get their food. She became a mental patient.

I decided, if I'm going to be poor and black and all, the least thing I'm going to do is to try and find out who I am. I created everything about me.

It was when I found out I could make mistakes that I knew I was on to something.

Actually, when I was in elementary school, I saw a saxophone. A band came to my school, and I saw this guy get up and play this solo. And I said, 'Oh man, what is that! That must be fantastic!'

After I left Texas and went to California, I had a hard time getting anyone to play anything that I was writing, so I had to end up playing them myself. And that's how I ended up just being a saxophone player.

I'm having this conversation with you now. I'm talking, but I'm thinking, feeling, smelling, and moving. Yet I'm concentrating on what you're saying. So that means there's more things going on in the body than just the present thing that the person's got you doing.

I think that those elements - light and sound - are beyond democratic. They're into the creative part of life.

Jazz is the only music in which the same note can be played night after night but differently each time.

Originally, I wanted to be a composer. I always tell people, 'I think of myself as a composer.'

You've got to realize. In the western world, regardless of what color you are, what title the music is, it's all played by the same notes.

Actually, I have another record I made with them in 1976, but I've had such a bad experience with record companies, because I keep my head so much in music and not in business.

All the things that human beings suffer from are how their environment treats them, and how the elements of their planet affects their mind and body - like radiation, cancer, and all.

Even when you write it, someone's got to play it. So if you can play it and bypass all the rest of the things, you're still doing as great as someone that has spent forty years trying to find out how to do that. I'm really pro-human beings, pro-expression of everything.

I asked my mother could I have an instrument. She said, 'Well if you go out and save your money.' So I went and got - I made me a shine box. I went out and started shining shoes, and I'd bring whatever I made.

I don't know what they're thinking about. Just because someone says, 'I like what you do' or something: They might like it today and tomorrow they might not. I've had that experience with record companies.

Much more quotes by Ornette Coleman below the page.

I don't really live like a musician myself. I think music is just something that I do, but I'd like to be doing lots of other things. I like to cure all kinds of illness.

I had a really good time in New Orleans, although I had some very tragic times in Baton Rouge. Some guys beat me up and threw my horn away. 'Cause I had a beard, then, and long hair like the Beatles.

I mean, if you decided to go out today and get you an instrument and do whatever it is that you do, no one can tell you how you're going to do it but when you do it.

I remember once, we got an interview, and he said, 'Dad, these people are writing about me like I'm an adult. Don't they know I'm a kid?' I have never tried to encourage him to get a music image like other musicians have.

I've been playing with Blackwell over 20 years. We used to play when I first went to Los Angeles. Blackwell plays the drums as if he's playing a wind instrument. Actually, he sounds more like a talking drum.

I've had those people very interested in my writing. Since I think of myself as a composer, I feel really good. I've had lots of guys call me up. I've gotten two or three commissions to write things. I've written lots of movie scores.

Tags: Else, Good, Someone

It just makes that person feel that what his work is is going to be more valid. But who wants to see a guy standing in front, looking like a bum, doing something that a bums don't do? This don't make sense.

It seems to me that in the western world, culture has something to do with appearance. A person that's out creating good stuff has got to appreciate someone when they take the time to have an appearance that goes with what they're doing.

For all the drama we all have with our families and all the tension and hostility, I couldn't have done this without my family. Being the people that they are - they're crazy - made it possible for me to be crazy and to live a lifestyle of my own design.