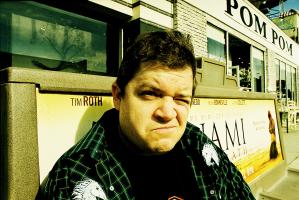 See the gallery for quotes by Patton Oswalt. You can to use those 8 images of quotes as a desktop wallpapers. 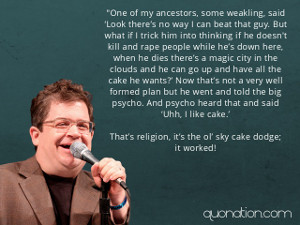 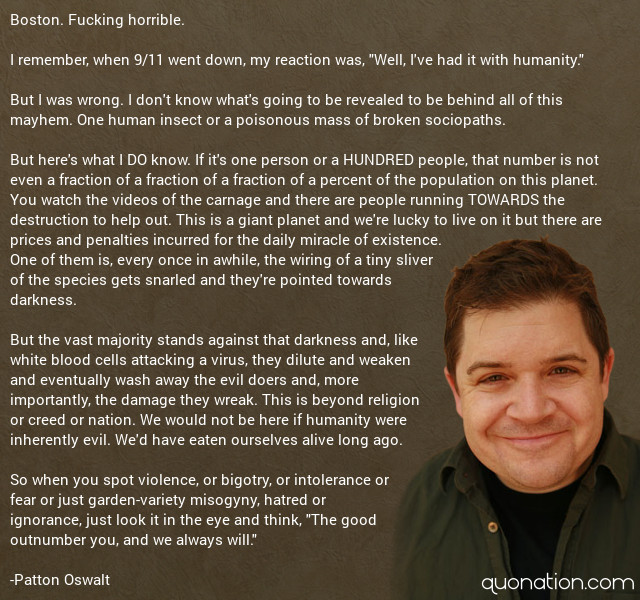 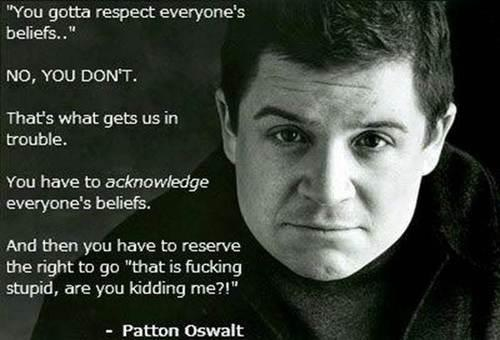 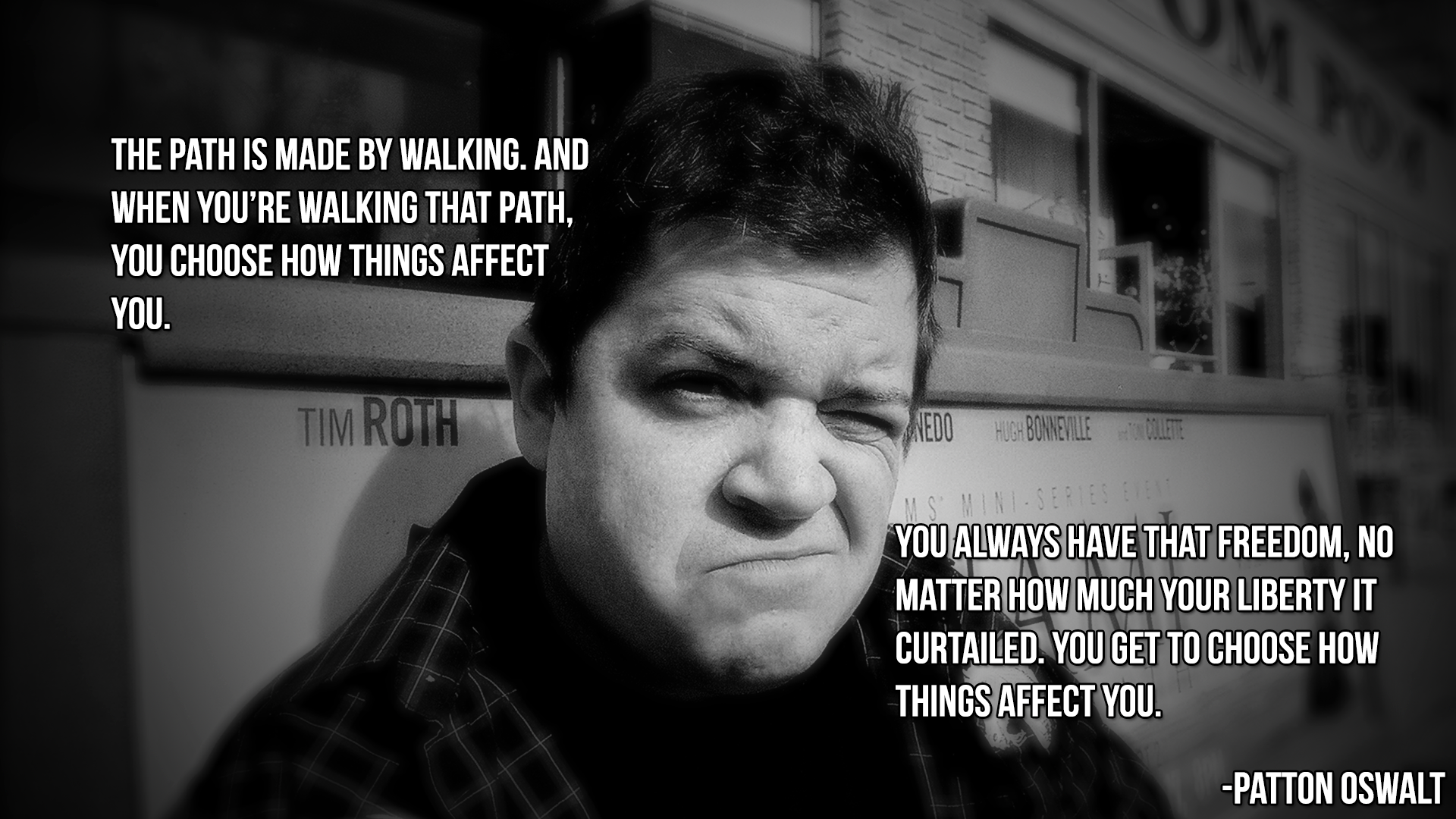 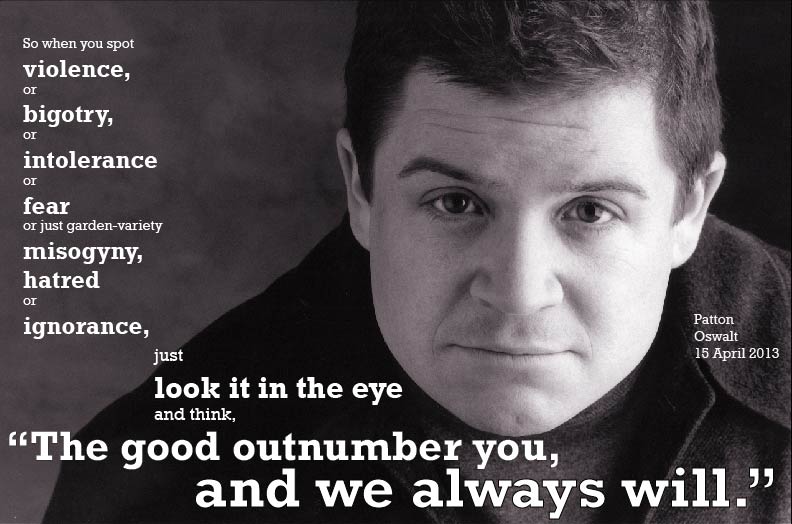 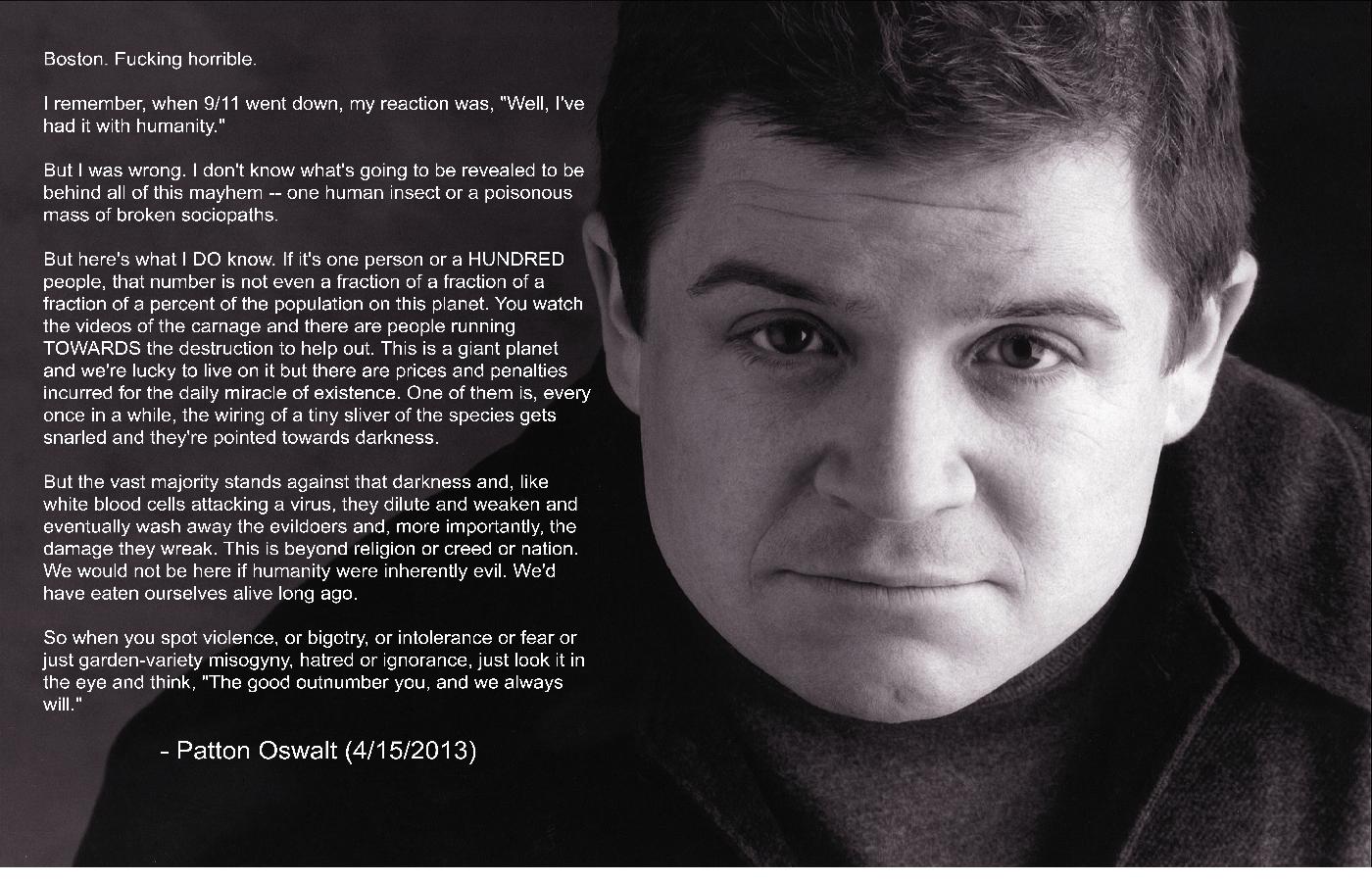 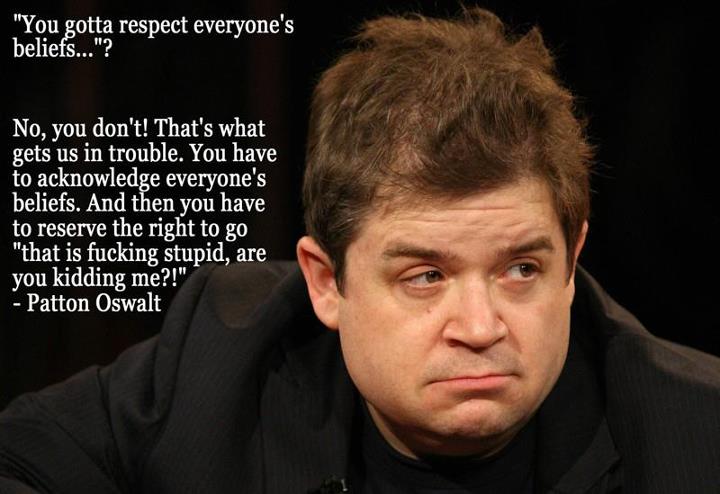 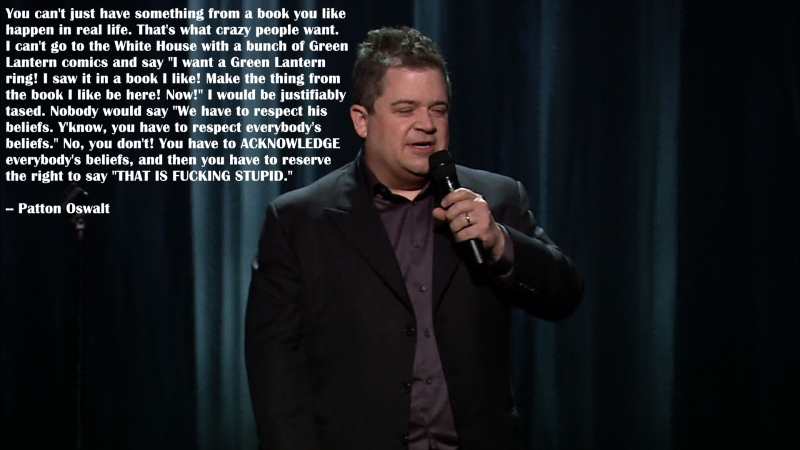 Before doing my first open mic, I was sitting in the back watching all these comedians banter back and forth and fire jokes and up each other, and I thought, 'This is where I wanna be.'

Every audience is different, even within the same venue. You have to just make every audience your audience; you can't pre-judge an audience based on the size of the room or the type of room.

Growing up, there are always those kids who are only happy when they are making someone else upset. That is unfortunately just how some people are. And their parents were fine. Some people are just born with bad wiring.

I mean, all alternative comedy is are comedians that have being doing it for so long, for so long, that they were relaxed enough to start becoming personal on stage.

I mean, the death in the late eighties and early nineties really shook out a lot of hacks. The pond just sort of dried up for a lot of really bad comedians.

I think I realized it was an art form at the beginning, but it took me a really long time before I was able to view what I was performing myself as an art form.

I think the kind of person that gravitates toward New York is a person that's not so much focused on controlling exactly how they appear and how they exit. They're more fascinated with the process.

I'm still very much an atheist, except that I don't necessarily see religion as being a bad thing. So, that's a weird thing that I'm struggling with that seems to be offending both atheists and people that are religious.

I've hung out in the writer's room a few times, but the fact is we've got such a good writing staff, I don't want to get my peanut butter fingerprints on anything.

If you actually do cold readings, it's very close to how people actually talk, because you're experiencing these thoughts anew every moment, and trying to make them come out coherently.

One of my groupies gave me a film that they made, and it ended up being amazing, so I got it shown at South by Southwest. If I can help get their stuff out there, then great.

The problem is, and I'm just as guilty of this, a lot of people see their follower count increase and mistake that for friendships. It's great to have followers, especially if you want to sell albums, promote shows, or promote your friends, but you still need to get outside and talk to other human beings.

There are times when I have to take, I call it a 'silence bath,' where I shut off all of the external gadgets. I go walk around, talk to people, and just live life for a while.

There's nothing wrong with doing comedies, and I'm not against comedies, either, but I always want to do stuff that keeps me off my guard and gets me out of my comfort zone.

Tags: Against, Off, Wrong

This sounds like a brag, but I know how to make good fried rice. I learned in college. There are two secrets - take the rice after you cook it and let it get cold in the fridge. Then cook the egg like you're making a fried egg and just before it's done, dump the rice and veg on it and swirl it around.

You know, in Los Angeles, you're constantly in your car, you're sealed up, you're not walking around. Whereas in New York, after a while, all your stuff is kind of public, in one way or the other. I'm not saying either one of those is bad; they're both great for a very specific kind of comedian. And I'm glad that they both exist.

So when you spot violence, or bigotry, or intolerance or fear or just garden-variety misogyny, hatred or ignorance, just look it in the eye and think, 'The good outnumber you, and we always will.'

George Bush is not stupid. He's evil. OK? There's a huge difference between stupid and evil.

I had a romance novel inside me, but I paid three sailors to beat it out if me with steel pipes.

We would not be here if humanity were inherently evil. We'd have eaten ourselves alive long ago.

If you hit a midget on the head with a stick, he turns into 40 gold coins.

I have to drink this much to be as unfunny as you.

It's like our country is being run by a bunch of bad alcoholic dads right now.

Much more quotes by Patton Oswalt below the page.

90% of every art form is garbage - dance and stand-up, painting and music. Focus on the 10% that's good, suck it up, and drive on.

As unhealthy as I am, I'm weirdly aware of exactly how my body functions.

Having enough money has to go hand in hand with living in a way that you're not being a slave to your possessions.

I hate all sidekicks.

I have a very tiny house in Burbank. I drive an 8-year-old car. I'm gonna drive it into the ground. I enjoy what I enjoy.

I have some shorter stories coming out in other books early next year. I might be pitching a re-vamp of Ghost Rider in the spring. We'll see.

I think right now is the best time for stand-up, ever. I sincerely do.

I'm always trying out new stuff onstage. That's where I do all my writing.

I'm going to continue to try to strike a balance, because I really, really do love doing stand-up, and I don't see why it should affect the acting.

I'm not familiar with the metric system.

In my mind, I was always a comedian who was going to branch into writing.

Knock on wood, my groupies tend to be very artistic, creative people - sometimes way more creative than I am.

Lot of ugly funny dudes end up with some pretty gorgeous women. Women are much deeper than us in choosing a mate - they see in the long term.

To get asked to do stuff like 'United States Of Tara' and 'Caprica' is terrific. I can't complain.

All the truly great stand-ups say, 'I go onstage, and I work on jokes. The inspiration will happen while I'm doing my work.' To me, in the end, the surest thing is work.

Based on my own experience, when you're going through adolescence you don't know how the world works. You can't set a story in the world you live in because you don't know what a utility bill is, or how to budget your paycheck.