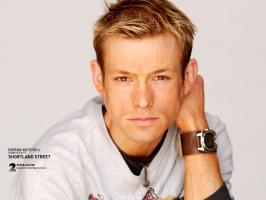 See the gallery for quotes by Adam Rickitt. You can to use those 6 images of quotes as a desktop wallpapers. 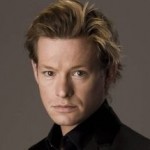 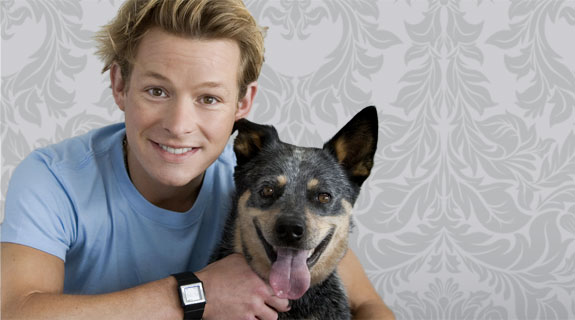 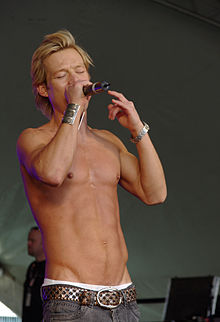 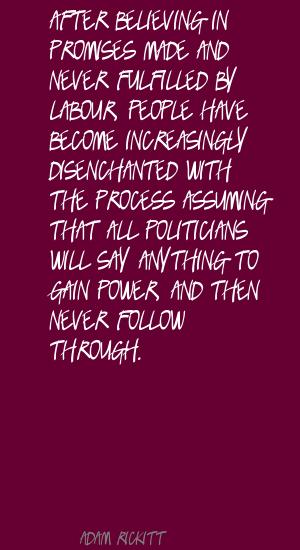 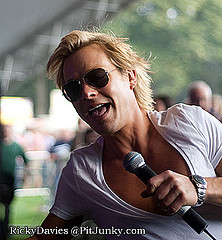 Drugs ruin peoples lives, break up families and have disastrous effects on our communities.

After believing in promises made and never fulfilled by Labour, people have become increasingly disenchanted with the process assuming that all politicians will say anything to gain power, and then never follow through.

I think church and state should remain entirely separate at all costs, and that the decision of religious marriage should be of each faith to debate and decide free of political influence.

However saying that I totally support the concept of civil partnerships in the eyes of the law, and think it a disgrace that same sex couples have had to wait so long for legal rights, protection and recognition.

I always wanted to act.

I did manage to secure a feature film for 2005, though, which I'm really chuffed about.

I don't honestly know why they offered me the part in Rent.

I think all of the parties still have some way to go to better utilise IT in campaigns.

I was stuck with looking like a girl. As soon as I got out of music it was straight off to the hairdressers.

Don't get me wrong, some of the mis-informed articles I have read over the last few weeks have been incredibly frustrating, but for my part I fully appreciate the opportunity I have been given and want to grasp it firmly.

For me it's more important to look at each constituency individually and find a community I feel I can serve to the best of my abilities, and where I feel I can make a real difference, and further their cause.

I have no great urge to be minister of this or minister of that, but instead would feel incredible blessed to have the opportunity to be a champion for a constituency and fight for their cause.

I realised that the only time I really enjoyed music was when I was in the studio writing. So even though it was a six album deal, they saw quite early on that I wasn't enjoying it as I should be. I didn't feel there was anything behind it.

I think a good MP is someone who cares for their community and becomes their champion, which is why I will make my home in any seat I am lucky enough to be selected for. Looks play no part in the equation, what matters is your ideas and connecting them to the electorate.

I think people forget that to be on the A list you first had to go through the original graded Parliamentary Selection Board. I did that and then like everyone else had the further interviews to get onto the A list.

Tags: Else, Everyone, Forget

I'm the first to admit I've had a sheltered life. I grew up in the country and went to a boarding school. It was all just part of the business - be nice to everyone and all that.

I've never had a chance to sit down and enjoy what's happened - I've been too panicked about the next move. So I took some time out. I thought either I do this now or in 10 years' time I'll end up in the Priory.

Since an early age I was taught to be very politically aware and knew from childhood that the process was something I wanted to contribute towards if I could.

The duty of responsibility placed on any MP is one of the greatest honours that can be bestowed and I for one don't believe the Conservative Party would abuse that trust by selecting someone who did not have the goods to do the job, just for the sake of media coverage.

The evidence that things are changing fast can be seen in the dramatic increase in the influence of blogging. We should be collecting emails as we used to collect telephone numbers and using them to better communicate our message to key voters.

Much more quotes by Adam Rickitt below the page.

There is a real diversity of talent and background on the A list so as to better reflect our society in all walks. There are people who have been candidates before, Councillors, Doctors, business leaders, charity campaigners.

With regard to the youth vote we should encourage them to partake in the process, making more use of our education system to show the role Government plays in their lives, but also utilise the youth media they relate to to better connect them to our message.