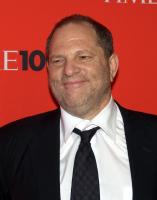 See the gallery for quotes by Harvey Weinstein. You can to use those 7 images of quotes as a desktop wallpapers. 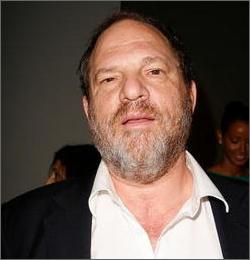 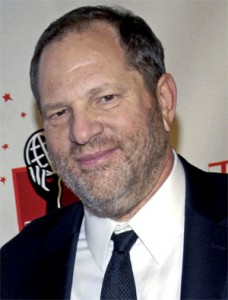 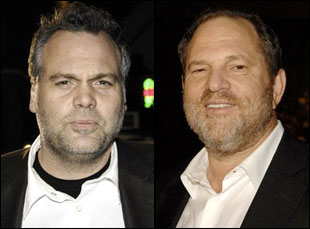 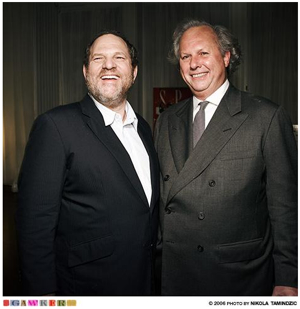 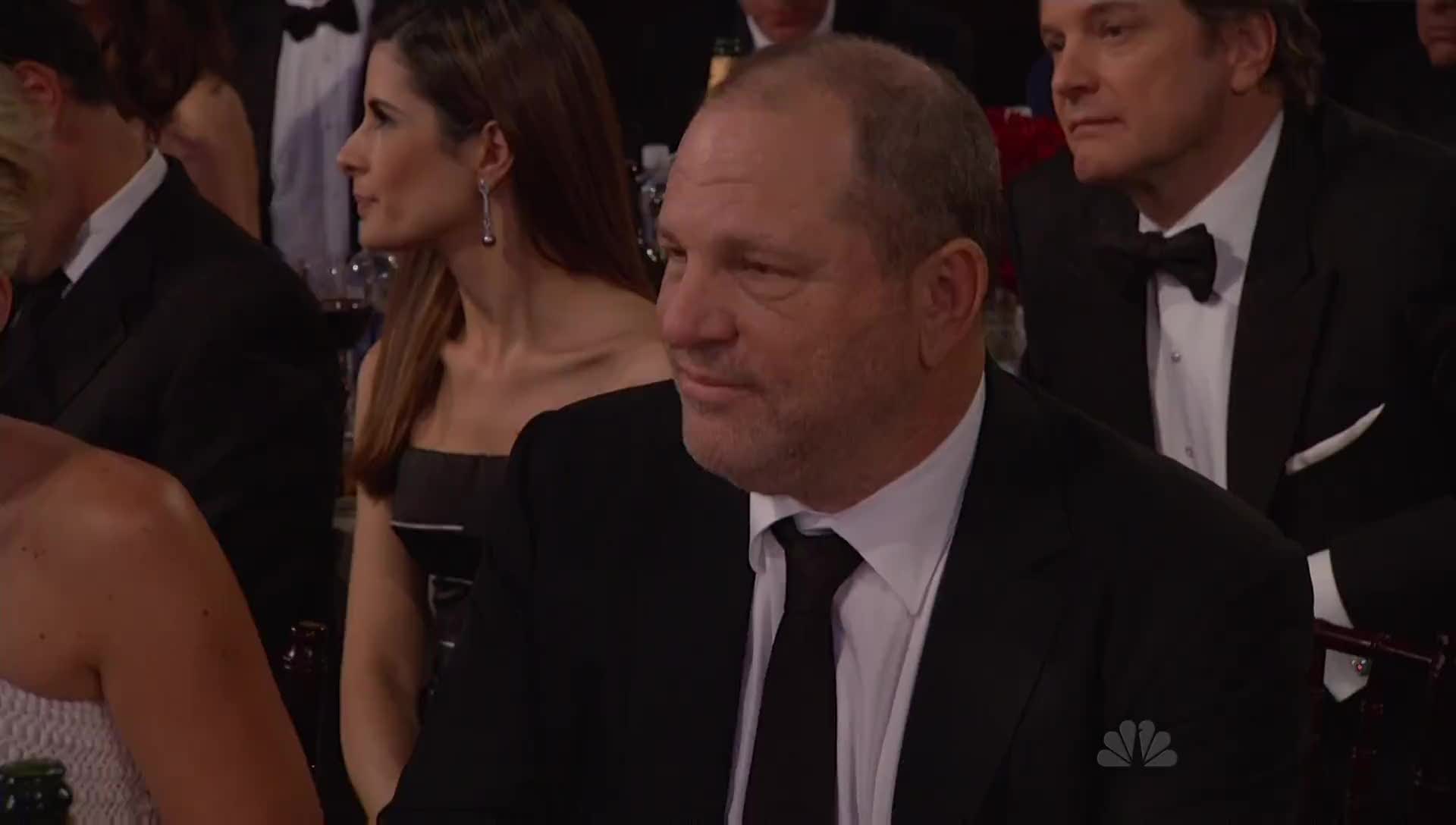 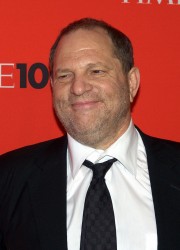 It's always tough for me to make a movie, and then sit on an airplane and watch somebody watch it on their phone.

It's hard to market a movie when you're at the mercy of critics and journalists.

It's hard to think of yourself as a brand, especially when I have four daughters who kick my butt early in the morning every day before I go to work.

It's the golden age of French cinema again but it's because Sarkozy had the guts to push through copyright law.

Margaret Thatcher made tough decisions. She put people out of work and she stood up to labor unions and she did a lot of things that I did not like.

My movies are important on an economic basis, on an artistic basis.

Over the years with movies, I've given directors notes.

People want to see big, escapist fare. They don't want to be challenged to think.

There are two things that come very easily to me: rooting for New York sports teams and making mistakes.

There's something about the fashion world that I like, which is, I see a lot of the designers really have affection for other designers.

To have the National Rifle Association rule the United States of America is pathetic.

We in the independent sector more than anybody need Netflix, because they care about what we do.

We need Netflix. We in the independent sector more than anybody need Netflix, because they care about what we do.

When people ask me what makes movies great, it's the material.

When we talk about Oscars, it's almost as a symbol of excellence, and the American public and the worldwide public accept that symbol.

When you have four daughters, you learn to lose early and often.

You can spend all the money in the world. If you've got a bad product, it doesn't matter.

You know, for years I used to read about myself. They'd say, 'He has a temper' or 'He's a bully' or something like that, and it always bothered me.

You know, my movies are important on an economic basis, on an artistic basis.

You're always fascinated by what you do, and how other people look at it.

All that self-control stuff, I tried all that stuff from analysts. I went everywhere to these guys, every kind of anger-management, psychologist, psychiatrist. 'Get rid of my temper, get rid of my temper.' And there was only one guy who just said, 'I don't think this is related to, uh, issues. I think there has got to be something wrong.'

Much more quotes by Harvey Weinstein below the page.

All my life, I have loved and been inspired by French cinema, and as a studio head it has been my pride and joy to have the ability to bring movies to audiences around the world.

Every time I do a movie like 'Finding Neverland' or 'Chocolat' or 'Shakespeare' in Love,' we deal with the creative process, but there's humor and fun along the way. I always love that kind of movie.

George Clooney's 'Ides of March' could be the most under-appreciated movie of the year. In 20 years they're gonna go back and say, 'Oh, that was American politics in that time period.' I follow politics, I love it, and that movie is so authentic.

I always loved the creative process, from 'Shakespeare in Love' to 'Finding Neverland' to 'Basquiat'; whether it's serious, or it's comedic, whether it's the 'inside look' at that, it seems to be a theme of what I do.

I just finished my homework fast, I was bored to death. There wasn't 500 channels so there was a thing for a librarian to teach a kid like me about reading. I started reading early and I read all the time, because I love it.

I must admit, even though I'm the product of two Jewish parents, I think the Irish temper got in there somewhere, so I'm going to check Mom's genealogy.

I never make a movie for awards consideration. I will use the hope of getting an Academy Award a) to honor the people who work so hard and also b) it's the greatest Good Housekeeping seal in the world. It's the greatest brand. It's as good as Louis Vuitton and Dior in the world of moviemaking. It's the Super Bowl.

I remember when I took Quentin Tarantino with me to a very private screening of the documentary 'Roman Polanski: Wanted and Desired,' which shows some of the legal irregularities of his case. I was involved by the film, and it was an amazing experience to see people weep at the end of it.

I saw 'Tintin' in Europe - it is 'Indiana Jones' on steroids. Unbelievable. What a fantastic movie. Steven Spielberg, you rock the house. And working with those young English guys like Edgar Wright, and also Peter Jackson; what a great combination.

I speak to kids 16, 17 years old, they haven't read a newspaper. They haven't physically handled a newspaper. They don't even look at the headlines on a subway. These kids are on the Internet and the level of news that they're getting is not the quality of 'The New York Times' or 'The Wall Street Journal.' It's way deficient, and they don't care.

I think for us - the Weinstein name, the Miramax name - they've both become synonymous with brands. We have a real winning formula when it comes to championing a different kind of movie, and I think the audience trusts us.

I think we do have our true, original stories that work. I can tell you that 'The King's Speech,' which we did, became a worldwide smash because people loved the personal story.

I was a camp counselor for kids whose moms were on welfare, unfortunately, and right across the camp was the best, most pristine and preppy camp in the universe.

I've been involved with violent movies, and then I've also said at a certain point, 'I can't take it anymore. Please cut it.' You know, you've got to respect the filmmaker, and it's a really tough issue.

If an Internet company steals content, they shut it down. And let me tell you, Apple France, Yahoo France or Google France, none of them have gone out of business.

Last year, when 'Black Swan,' 'True Grit' and 'King's Speech' all grossed over $100 million, it gave studios and independent financiers the confidence to make daring movies and not do the same old you-know-what.

Like Rodgers and Hammerstein, I'm not afraid to deal with themes about the ups and downs of life, yet which are still entertaining, and you still feel these stories.

People know that I have a great love for cinema. Not just for commercial cinema, but for the 'cinema d'auteur.' But to me, two of the great 'auteurs' are actually actors and they both happen to be French. One is Alain Delon and the other is Jean-Paul Belmondo.

Roman Polanski is a man who cares deeply about his art and its place in this world. What happened to him on his incredible path is filled with tragedy, and most men would have collapsed. Instead, he became a great artist and continues to make great films.

The great thing that guys like Facebook's Mark Zuckerberg and the Google guys have in common is they treat their technology like it's art, and I suppose in the hands of virtuosos like them, it is.

There is nothing like the way people feel after they've seen 'The Intouchables.' They feel amazing. The word of mouth on this film is incredible. It's intelligent-feeling good. You're not insulted by the low-browness or stupidity of some of the humor. It's so smart and terrific.

We didn't care if we were well-liked as long as the movies were good. We served the movie - that was our master at Miramax. In our second incarnation, the movie is still the master but we're getting the same results in more subtle ways.

We've been able to access deals that under our former relationship with Disney - with tax advantages and strategic partners - that we just weren't able to do.

When we talk about Oscars, it's almost as a symbol of excellence, and the American public and the worldwide public accept that symbol. So, a movie like 'The Artist' that costs $14 million, has to go out and compete with movies that cost $140 million. How does David deal with Goliath?

If we don't get gun-control laws in this country, we are full of beans. To have the National Rifle Association rule the United States is pathetic. And I agree with Mayor Michael Bloomberg: It's time to put up or shut up about gun control for both parties.

I wanted to do something inspirational for my children.

I learned what I really love is making films, not the film business. I want to be on the set, meeting with writers, I want that freedom. I love it now.

I've had such a great track record in making a huge profit when the movies are smaller.

All my movies got screwed up because of my personality.

As a young man, I went to Paris and soaked up many hours of film knowledge from Robert Hakim in my efforts to become a producer.

Debt can be the most addictive thing in the universe, and it can kill you. You get used to living high off the hog. It was intoxicating.

First of all, I never make a movie for awards consideration.

I always find that when I do something that I like, from my heart, then it works.

I don't have to agree with everything a candidate does to support him.

I hope to continue my friendship with France and its filmmakers for many years to come.

I love it when these Internet dudes say to me, 'Hey man, we just want to be 'content neutral.'

I think audiences can deal with these mature themes.

I think sometimes we in the industry have to do ambitious projects.

I'd never made a teen comedy in my life.

I'm probably the only person who goes to work and says 'Wow, it's really nice here and sweet,' even in the competitive movie business.

I'm sure the next time Piers Morgan asks me to host his show again I will ask President Obama to be my guest.

I'm the father of four daughters.

I... grew up in politics and I used to work for the Democratic Party.