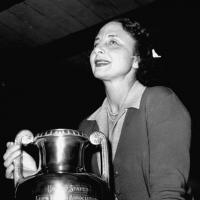 See the gallery for quotes by Helen Wills Moody. You can to use those 8 images of quotes as a desktop wallpapers. 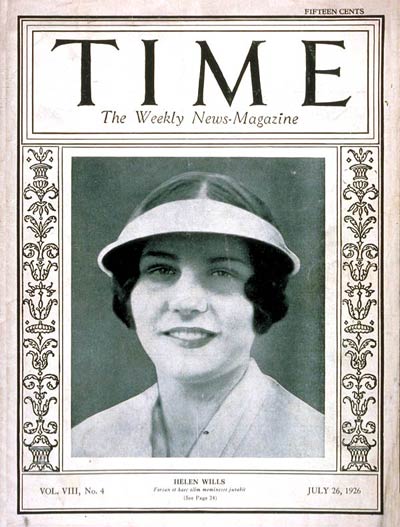 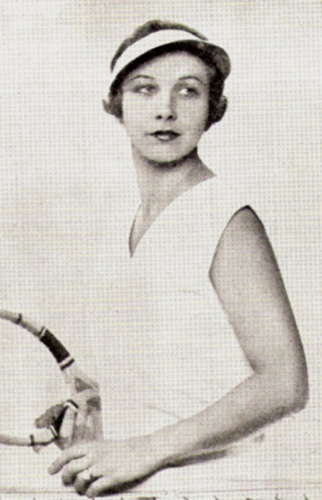 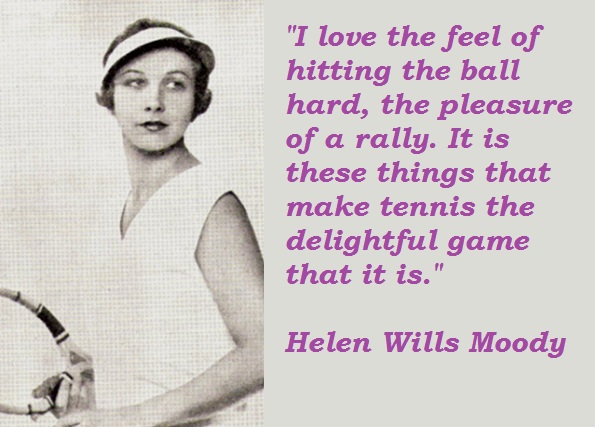 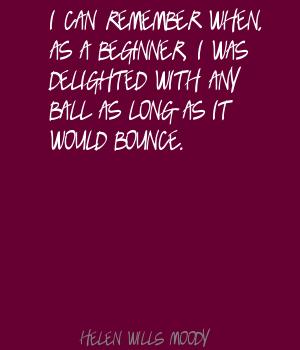 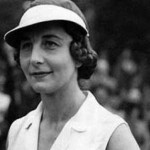 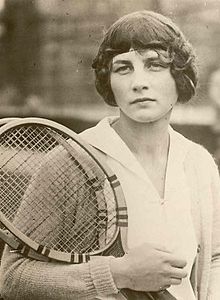 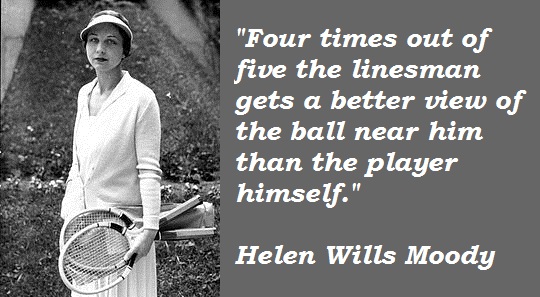 Four times out of five the linesman gets a better view of the ball near him than the player himself.

Tags: Him, Himself, Times

I can remember when, as a beginner, I was delighted with any ball as long as it would bounce.

I love the feel of hitting the ball hard, the pleasure of a rally. It is these things that make tennis the delightful game that it is.

The 1927 Wimbledon finals were almost put off because of the rain, which threatened every moment.

Unless a player goes in for intensive play and tournament competition, two racquets are sufficient.

When I play, I become entirely absorbed in the game. It may be a form of concentration.

Balls should be good for at least six sets, and for more for the average player. But if the rallies are long, they do not last as long as this. There is a fuzz on the surface that wears off on the hard court.

My feelings, as the last ball travelled over the net, and as I realized that the final match was mine, I cannot describe. I felt that here was a prize for all the games I had ever played.

No player can become accustomed to New York's climate in August in a few days. The playing conditions, the courts in New York and France are very different.

The angle from which the line and ball are seen makes a tremendous difference in the call, and the player who is inclined to fret inwardly about decisions should realize this.

The seeded draw came into being. This means that the two best players of the tournament are placed in opposite halves in the draw, and cannot possibly meet until the finals, if they come through successfully against all the rest of the participants.

The States which form the northern border of the United States westward from the Great Lakes to the Pacific coast include an area several times larger than France and could contain ten Englands and still have room to spare.

Great men are usually the products of their times and one of the men developed by these times takes rank with the greatest railroad leaders in history.

Farmers, merchants, manufacturers, and the traveling public have all had their troubles with the transportation lines, and the difficulties to which these struggles have given rise have produced that problem which is even now apparently far from solution.

Horses and mules, and even sail cars, made more rapid progress than did the earliest locomotive.

The history of the Erie Railroad ever since 1901 has been a record of progress.

The railroad originally was as completely dissociated from steam propulsion as was the ship.

The United States as we know it today is largely the result of mechanical inventions, and in particular of agricultural machinery and the railroad.

While no one railroad can completely duplicate another line, two or more may compete at particular points.

Tags: Another, May, While

With the reorganization of 1898 finished, the Baltimore and Ohio Railroad entered a new period in its history.

As the contest proceeded, public interest increased and the entire country watched to see which company would win the big government subsidies through the mountains.

Consequently many large railroad systems of heavy capitalization bid fair to run into difficulties on the first serious falling off in general business.

In the decade before the Civil War various north and south lines of railway were projected and some of these were assisted by grants of land from the Federal Government.

In the United States three new methods of transportation made their appearance at almost the same time - the steamboat, the canal boat, and the rail car.

Many of the railroad evils were inherent in the situation; they were explained by the fact that both managers and public were dealing with a new agency whose laws they did not completely understand.

Much more quotes by Helen Wills Moody below the page.

People began to understand that with the acquisition of California the nation had obtained practically half a continent, of which the future possibilities were almost unlimited, so far as the development of natural resources and the genera production of wealth were concerned.

The close relationship between railroad expansion and the genera development and prosperity of the country is nowhere brought more distinctly into relief than in connection with the construction of the Pacific railroads.

The construction of extensive railways, however, and particularly the consolidation of small, experimental lines into large systems, dates from the days of the discovery of gold in California.

The financial history of the Baltimore and Ohio since the close of the nineteenth century is interesting chiefly in connection with changes in the control of the property.

The nation did not begin to realize the extraordinary possibilities of the vast Western territory until its attention was thus suddenly and definitely concentrated on the Pacific by the annual addition of over fifty million dollars to the circulating medium.

The public conviction that a railroad linking the West and the East was an absolute necessity became so pronounced after the gold discoveries of '49 that Congress passed an act in 1853 providing for a survey of several lines from the Mississippi to the Pacific.

When the scheme for the construction of a railroad from Baltimore to the waters of the Ohio River first began to take form, the United States had barely emerged from the Revolutionary period.

Yet, in 1850 nearly all the railroads in the United States lay east of the Mississippi River, and all of them, even when they were physically mere extensions of one another, were separately owned and separately managed.

Does not science prove that there is no Creator?