See the gallery for quotes by John George Nicolay. You can to use those 8 images of quotes as a desktop wallpapers. 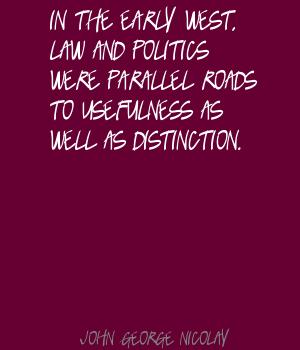 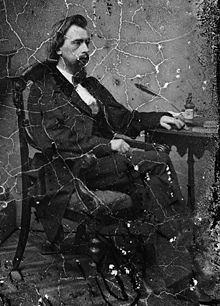 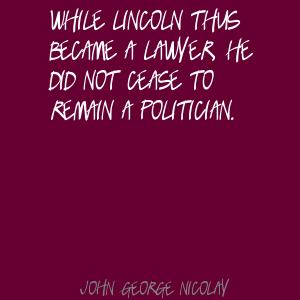 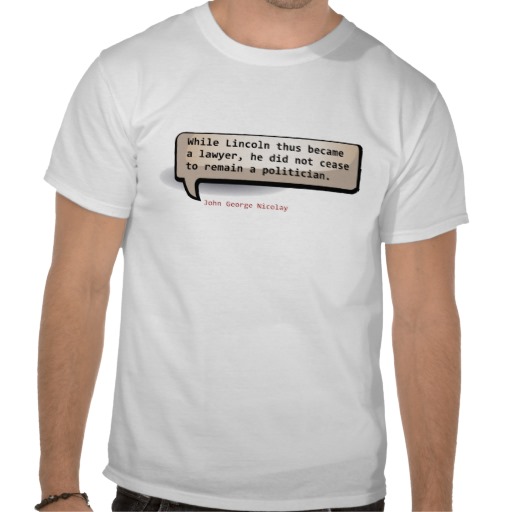 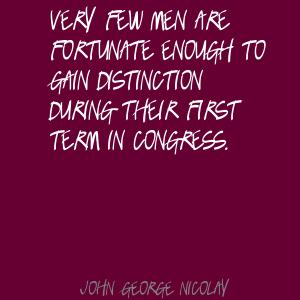 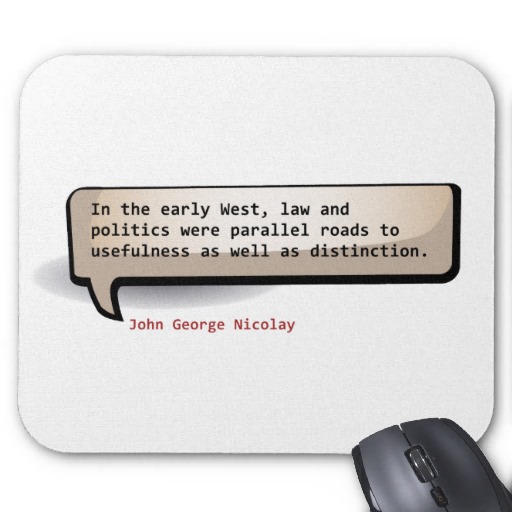 In the early West, law and politics were parallel roads to usefulness as well as distinction.

Very few men are fortunate enough to gain distinction during their first term in Congress.

While Lincoln thus became a lawyer, he did not cease to remain a politician.

It is therefore not to be wondered at that Lincoln's single term in the House of Representatives at Washington added practically nothing to his reputation.

It turned out in the long run that Lincoln's credit and the popular confidence that supported it were as valuable both to his creditors and himself as if the sums which stood over his signature had been gold coin in a solvent bank.

Tags: Both, Confidence, Himself

Lincoln's removal from New Salem to Springfield and his entrance into a law partnership with Major John T. Stuart begin a distinctively new period in his career.

Lincoln's stature and strength, his intelligence and ambition - in short, all the elements which gave him popularity among men in New Salem, rendered him equally attractive to the fair sex of that village.

Nobody understood better than Mr. Lincoln the obvious truth that in politics it does not suffice merely to nominate candidates. Something must also be done to elect them.

The death of Mrs. Lincoln was a serious loss to her husband and children. Abraham's sister Sarah was only eleven years old, and the tasks and cares of the little household were altogether too heavy for her years and experience.

The function of the politician, therefore, is one of continuous watchfulness and activity, and he must have intimate knowledge of details if he would work out grand results.

The meetings of the legislature at Springfield then first brought together that splendid group of young men of genius whose phenomenal careers and distinguished services have given Illinois fame in the history of the nation.

I finally demonstrated that typhus infection is not hereditary in the louse.

It did not seem likely that I was destined to undertake research on typhus.

At the time when I was conducting my research there was no known method for taking the guinea pig's temperature. I demonstrated a technique which is now widely used.

Even if it had not been possible to reproduce the disease in animals and consequently to verify the hypothesis, this simple observation would have been sufficient to demonstrate the way in which the disease was propagated.

From the practical point of view, the susceptibility to infection of the guinea pig proved to be the most useful step forward. Today, all laboratories use this animal for preserving the virus.

I demonstrated the characteristics of experimental fever. It appears after an incubation period which is never less than five days. It follows the same pattern as natural fever in man, but is of shorter duration and less pronounced.

I was less successful in my attempts to effect preventive vaccination against typhus by using the virus and in trying to produce large quantities of serum using large animals.

My first attempts to transmit typhus to laboratory animals, including the smaller species of monkeys, had failed, as had those of my predecessors, for reasons which I can easily supply today.

Of all the problems which were open to me for study, typhus was the most urgent and the most unexplored. We knew nothing of the way in which contagion spread.

The discovery that I soon made that the guinea pig was also susceptible to infection made it possible for me, from the third year on, to preserve the virus on this animal.

The fact that I was fortunate enough to escape contagion, in spite of frequent, sometimes daily contacts with the disease, was because I soon guessed how it spread.

Much more quotes by John George Nicolay below the page.

We need a reason to speak but none to keep silent.

When we hide our failings from others, we seek to hide them from ourselves, and it is in the latter attempt that we are most successful.

Tags: Others, Ourselves, Successful