See the gallery for quotes by Kevin Mitnick. You can to use those 8 images of quotes as a desktop wallpapers. 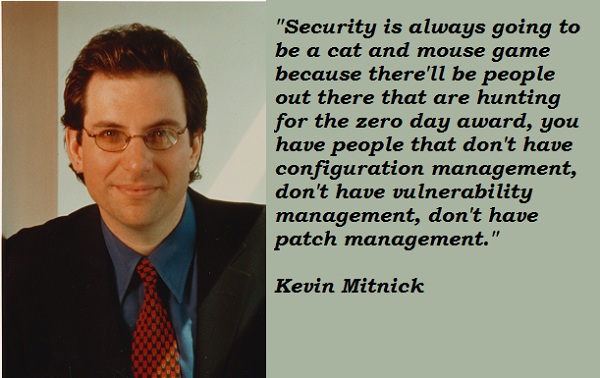 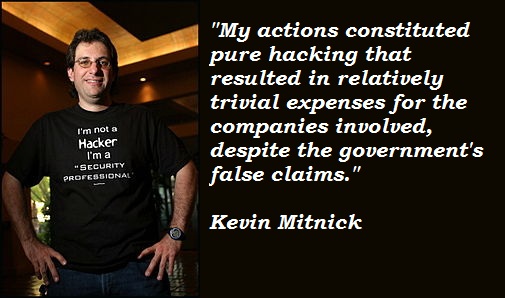 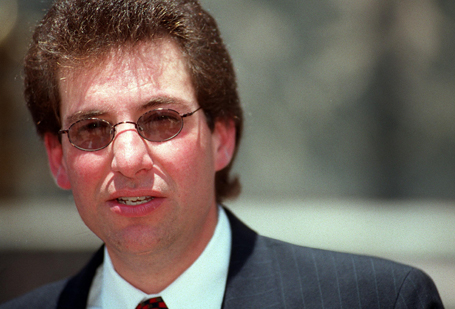 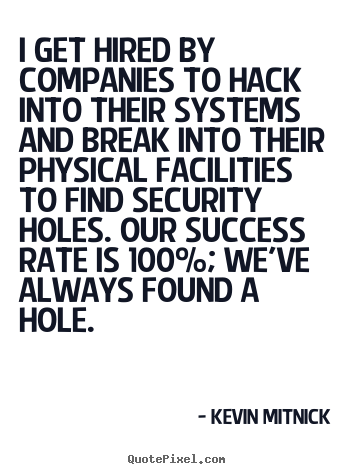 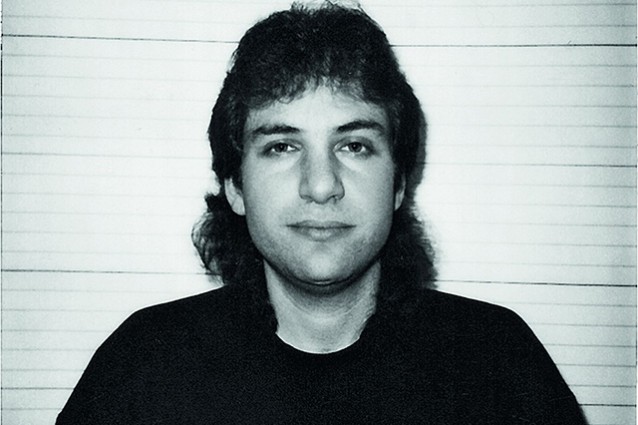 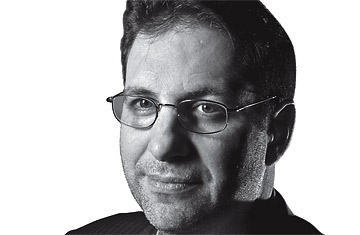 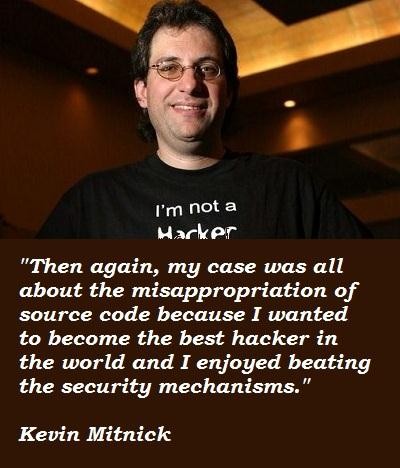 I characterize myself as a retired hacker. I'm applying what I know to improve security at companies.

I did get a huge endorphin rush when I was able to crack a system because it was like a video game.

I saw myself as an electronic joy rider.

I was an accomplished computer trespasser. I don't consider myself a thief.

I was fascinated with the phone system and how it worked; I became a hacker to get better control over the phone company.

I was pretty much the government's poster boy for what I had done.

I wasn't a hacker for the money, and it wasn't to cause damage.

Tags: Half, Hate, Sure

Once when I was a fugitive, I was working for a law firm in Denver.

So the ethic I was taught in school resulted in the path I chose in my life following school.

Steve Wozniak and Steve Jobs founded Apple Inc, which set the computing world on its ear with the Macintosh in 1984.

The key to social engineering is influencing a person to do something that allows the hacker to gain access to information or your network.

We have problems with our physical security, operational security through to management.

I think malware is a significant threat because the mitigation, like antivirus software, hasn't evolved to a point to really mitigate the risk to a reasonable degree.

I was addicted to hacking, more for the intellectual challenge, the curiosity, the seduction of adventure; not for stealing, or causing damage or writing computer viruses.

New security loopholes are constantly popping up because of wireless networking. The cat-and-mouse game between hackers and system administrators is still in full swing.

When an attacker fails with one person, they often go to another person. The key is to report the attack to other departments. Workers should know to act like they are going along with what the hacker wants and take copious notes so the company will know what the hacker is trying to find.

Any type of operating system that I wanted to be able to hack, I basically compromised the source code, copied it over to the university because I didn't have enough space on my 200 megabyte hard drive.

Computer hacking really results in financial losses and hassles. The objectives of terrorist groups are more serious. That is not to say that cyber groups can't access a telephone switch in Manhattan on a day like 9/11, shut it down, and therefore cause more casualties.

I can go into LinkedIn and search for network engineers and come up with a list of great spear-phishing targets because they usually have administrator rights over the network. Then I go onto Twitter or Facebook and trick them into doing something, and I have privileged access.

I think it goes back to my high school days. In computer class, the first assignment was to write a program to print the first 100 Fibonacci numbers. Instead, I wrote a program that would steal passwords of students. My teacher gave me an A.

I'm an expert witness in a case that's in appeal about a guy who allegedly misappropriated source code from a major, major company - he actually worked there and then apparently they found it on his laptop later.

Much more quotes by Kevin Mitnick below the page.

I'm still a hacker. I get paid for it now. I never received any monetary gain from the hacking I did before. The main difference in what I do now compared to what I did then is that I now do it with authorization.

It doesn't work the same way everywhere. The Americans are the most gullible, because they don't like to deny co-workers' requests. People in the former Soviet bloc countries are less trusting, perhaps because of their previous experiences with their countries' secret services.

It's kind of interesting, because hacking is a skill that could be used for criminal purposes or legitimate purposes, and so even though in the past I was hacking for the curiosity, and the thrill, to get a bite of the forbidden fruit of knowledge, I'm now working in the security field as a public speaker.

It's true, I had hacked into a lot of companies, and took copies of the source code to analyze it for security bugs. If I could locate security bugs, I could become better at hacking into their systems. It was all towards becoming a better hacker.

No way, no how did I break into NORAD. That's a complete myth. And I never attempted to access anything considered to be classified government systems.

So what I was essentially doing was, I compromised the confidentiality of their proprietary software to advance my agenda of becoming the best at breaking through the lock.

Social engineering is using deception, manipulation and influence to convince a human who has access to a computer system to do something, like click on an attachment in an e-mail.

The perfect PIN is not four digits and not associated with your life, like an old telephone number. It's something easy for you to remember and hard for other people to guess.

The hacker mindset doesn't actually see what happens on the other side, to the victim.

My actions constituted pure hacking that resulted in relatively trivial expenses for the companies involved, despite the government's false claims.

Social engineering is using manipulation, influence and deception to get a person, a trusted insider within an organization, to comply with a request, and the request is usually to release information or to perform some sort of action item that benefits that attacker.

All they need to do is to set up some website somewhere selling some bogus product at twenty percent of the normal market prices and people are going to be tricked into providing their credit card numbers.

As a young boy, I was taught in high school that hacking was cool.

I made stupid decisions as a kid, or as a young adult, but I'm trying to be now, I'm trying to take this lemon and make lemonade.

I get hired by companies to hack into their systems and break into their physical facilities to find security holes. Our success rate is 100%; we've always found a hole.

I could have evaded the FBI a lot longer if I had been able to control my passion for hacking.

I get hired to hack into computers now and sometimes it's actually easier than it was years ago.

My argument is not that I shouldn't have been punished, but that the punishment didn't fit the crime.

Should we fear hackers? Intention is at the heart of this discussion.

Some people think technology has the answers.

A company can spend hundreds of thousands of dollars on firewalls, intrusion detection systems and encryption and other security technologies, but if an attacker can call one trusted person within the company, and that person complies, and if the attacker gets in, then all that money spent on technology is essentially wasted.

Are hackers a threat? The degree of threat presented by any conduct, whether legal or illegal, depends on the actions and intent of the individual and the harm they cause.

Hackers are breaking the systems for profit. Before, it was about intellectual curiosity and pursuit of knowledge and thrill, and now hacking is big business.

I got so passionate about technology. Hacking to me was like a video game. It was about getting trophies. I just kept going on and on, despite all the trouble I was getting into, because I was hooked.

It was used for decades to describe talented computer enthusiasts, people whose skill at using computers to solve technical problems and puzzles was - and is - respected and admired by others possessing similar technical skills.

It's actually a smarter crime because imagine if you rob a bank, or you're dealing drugs. If you get caught you're going to spend a lot of time in custody. But with hacking, it's much easier to commit the crime and the risk of punishment is slim to none.

Oracle, for example, has even hired people to dumpster dive for information about its competitor, Microsoft. It's not even illegal, because trash isn't covered by data secrecy laws.

Then again, my case was all about the misappropriation of source code because I wanted to become the best hacker in the world and I enjoyed beating the security mechanisms.

Back in my day, I would probe by hand. Now you can get commercial software that does the job for you.

For the average home-user, anti-virus software is a must.