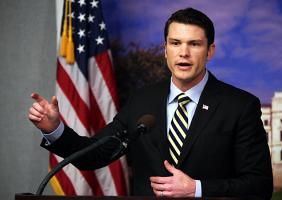 See the gallery for quotes by Pete Hegseth. You can to use those 8 images of quotes as a desktop wallpapers. 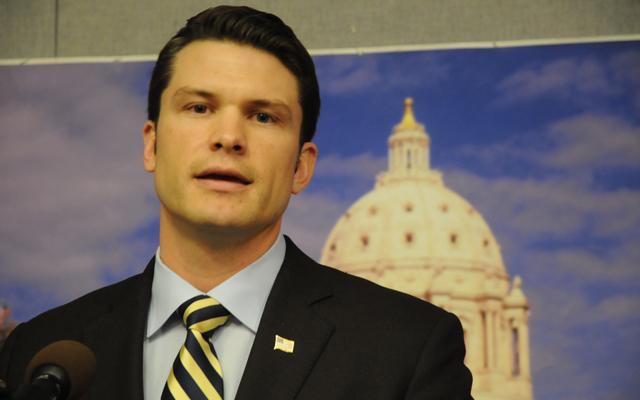 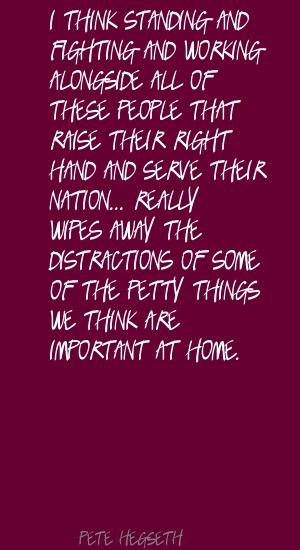 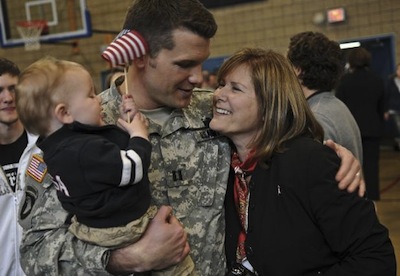 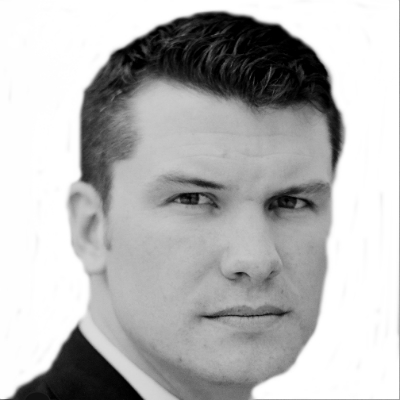 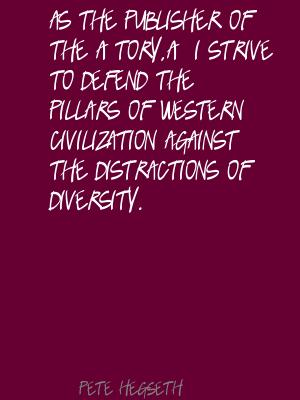 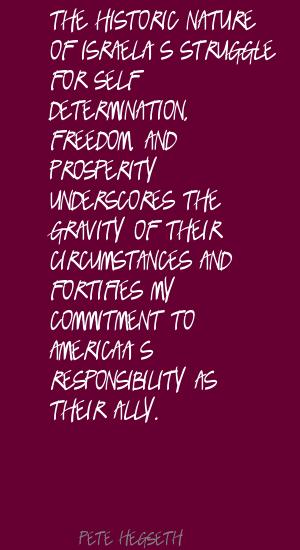 As the publisher of the 'Tory,' I strive to defend the pillars of Western civilization against the distractions of diversity.

Being a defense hawk and a budget hawk are not mutually exclusive.

Peace through strength works; but the flip side is war invited by weakness.

President Lincoln chose to fight a bloody and unpopular war because he believed the enemy had to be defeated. He was right.

Whether we like it or not, gender differences matter in a combat situation.

As an infantry officer who served in Iraq, Afghanistan, and Guantanamo Bay, I have led men in combat and trained them on tactics and strategy. The mission of the infantry is to 'close with, and destroy, the enemy.' Our job, in a direct way, is to fight and win wars.

As an observer, I react to the realities of Israeli life with both envy and relief. Nobody wants to live under the threat of constant attack from enemies right next door, under ceaseless and often unfair international scrutiny, defending his homeland by day and living with the memories of mass genocide at night.

At Concerned Veterans for America, we've made the case that the defense budget could be targeted for spending reform, but in a targeted fashion that genuinely changes unsustainable spending trajectories while preserving U.S. defense capacity.

Combat duty is strenuous and physically demanding, and I'm not the first person to notice that men and women are built differently. And while many will argue that women will only be allowed into combat arms units under the same requirements as their male counterparts, count me as skeptical.

Concerned Veterans for America (CVA) has called for an audit of the Pentagon, so that we finally have some transparency and accountability in how DOD spends taxpayer dollars.

Defense leaders should be searching for ways to reform out-of-date procurement processes, to collapse layers of Pentagon bureaucracy, and to restrain the growth in personnel and benefits costs. A critical first step in that process should be to conduct a full Pentagon audit to determine how DOD spends taxpayer dollars.

I believe, if done correctly, eliminating Saddam and liberating Iraq could be the 'Normandy Invasion' or 'fall of the Berlin Wall' of our generation... the Iraqi people are eager to be rid of Saddam, and there is equally encouraging evidence that republican principles could thrive there.

I think standing and fighting and working alongside all of these people that raise their right hand and serve their nation... really wipes away the distractions of some of the petty things we think are important at home.

In the 360-degree battlefields of Iraq and Afghanistan, women have served honorably and fought valiantly. Yet there is a key difference between being in harm's way and reacting to enemy contact, and being in a direct combat operations role day in and day out. They are different scenarios that require different standards.

Memorial Day isn't just about honoring veterans, its honoring those who lost their lives. Veterans had the fortune of coming home. For us, that's a reminder of when we come home we still have a responsibility to serve. It's a continuation of service that honors our country and those who fell defending it.

Military deployments have never been something to enjoy, but the consequence of the actions, the shared nature of the sacrifices, and the nobility of the cause are invigorating. To be clear, I'm not talking about the killing and the death; rather, the sense of purpose that pervades every action, reaction, and outcome.

Political correctness is a poison to our security and defenses. It imposes a willful blindness, both at the macro level when unwilling to engage with radical Islamism or whatever you want to call it - if you're not willing to call it what it is - and at the micro level, at the street level.

Tags: Both, Political, Whatever

The choices Israelis face and the decisions they make, day in and day out, are literally the difference between life and death. In many ways, I liken their reactions to the way I felt while serving in Iraq.

The historic nature of Israel's struggle for self-determination, freedom, and prosperity underscores the gravity of their circumstances and fortifies my commitment to America's responsibility as their ally.

Veterans are driven by the same frustrations that the public has with what is happening in Washington... the fiscal irresponsibility and the financial crisis that our country is facing.

When Mr. Obama entered office, he said all the right things about getting Washington spending under control. He even promised to cut the deficit in half by the end of his first term. Obviously, that didn't happen.

With the winding down of the conflicts in Iraq and Afghanistan, the United States now has an opportunity to implement real defense reforms without having a serious impact on immediate battlefield needs.