See the gallery for quotes by Caleb Cushing. You can to use those 8 images of quotes as a desktop wallpapers. 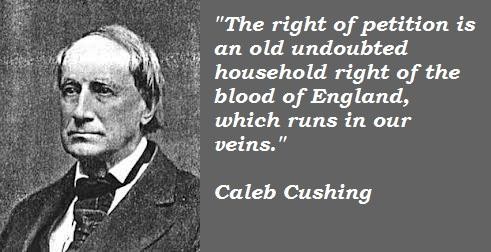 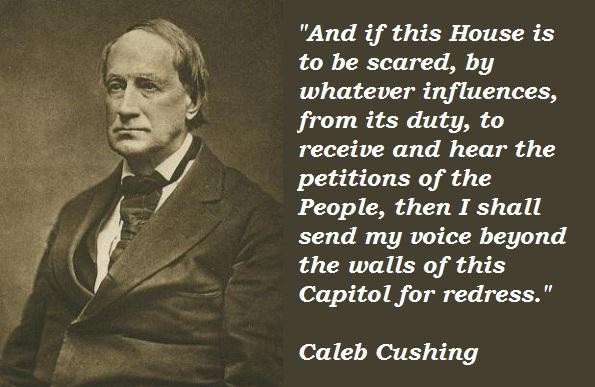 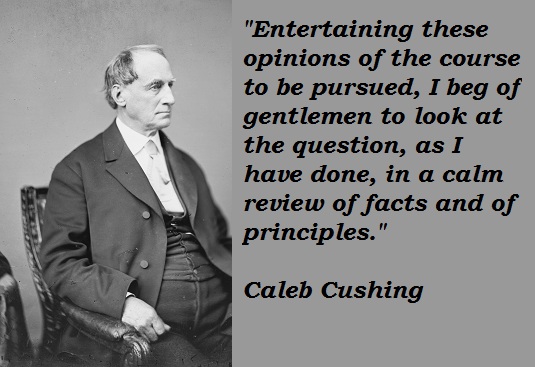 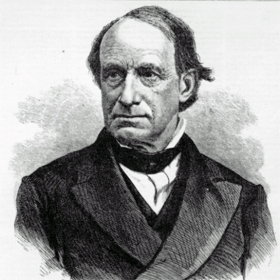 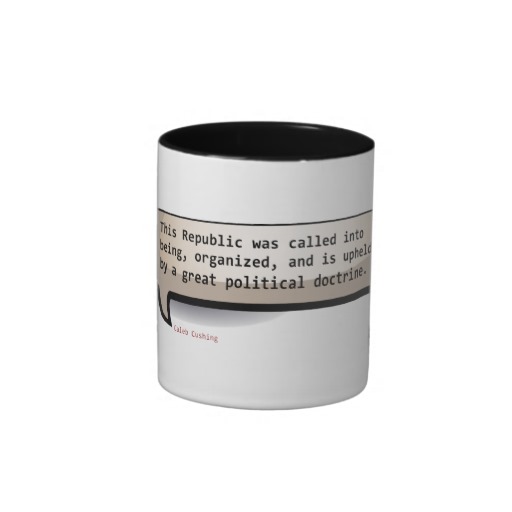 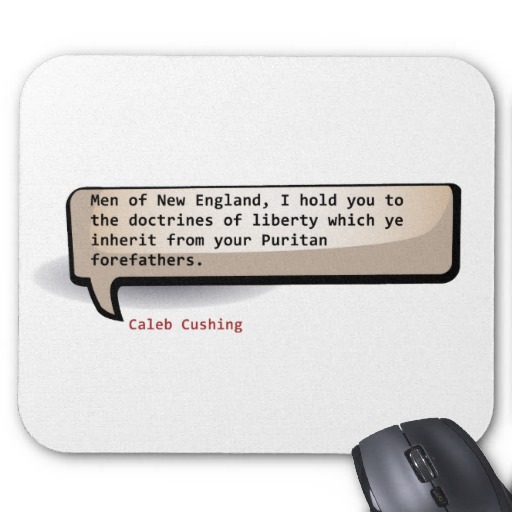 Entertaining these opinions of the course to be pursued, I beg of gentlemen to look at the question, as I have done, in a calm review of facts and of principles.

We are laying the foundations of a government, which we hope may outlast the Pyramids.

Men of New England, I hold you to the doctrines of liberty which ye inherit from your Puritan forefathers.

Men of Virginia, countrymen of Washington, of Patrick Henry, of Jefferson, and of Madison, will ye be true to your constitutional faith?

The right of petition is an old undoubted household right of the blood of England, which runs in our veins.

The winged words uttered in this House have gone forth to the world, on their mission of good or of evil.

These our great natural rights we keep to ourselves; we will not have them tampered with; respecting them we give to you no commission whatsoever.

This Republic was called into being, organized, and is upheld, by a great political doctrine.

And if this House is to be scared, by whatever influences, from its duty, to receive and hear the petitions of the People, then I shall send my voice beyond the walls of this Capitol for redress.

Be the responsibility on their heads who raise this novel and extraordinary question of reception, going to the unconstitutional abridgment, as I conceive, of the great right of petition inherent in the People of the United States.

Here, again, as I conceive, gentlemen forget that this government is a republican one, resting exclusively in the intelligence and virtue of the People.

I declare and protest in advance, that I do not intend, at this time at least; to be drawn or driven into the question of slavery, in either of its subdivisions or forms.

I maintain that the House is bound by the Constitution to receive the petitions; after which, it will take such method of deciding upon them as reason and principle shall dictate.

If there be any plausible reason for supposing that we have the right to legislate on the slave interests of the District, you cannot put down the investigation of the subject out of doors, by refusing to receive petitions.

It is impossible, in my mind, to distinguish between the refusal to receive a petition, or its summary rejection by some general order, and the denial of the right of petition.

Sir, allusion has been made, in an early stage of this debate, to the history of the excitement which once pervaded a considerable part of the country, in reference to the transportation of the mails on the Lord's day.

Sir, I am a republican; and I desire to see this House observe the principles of that democracy which is ever on the lips of its members, and which, I hope, is in their hearts, as I know and feel it is in mine, and mean it shall be in my conduct.

Some of them, in accepting the proposed plan of government, coupled their acceptance with a recommendation of various additions to the Constitution, which they deemed essential to the preservation of the rights of the States, or of the People.

The proceedings of this House in 1790, in reference to petitions on the matter of the slave trade, and of slavery in the States, have been cited. It has been said that those petitions were not received.

The right of petition, I have said, was not conferred on the People by the Constitution, but was a pre-existing right, reserved by the People out of the grants of power made to Congress.

Upon the Constitution, upon the pre-existing legal rights of the People, as understood in this country and in England, I have argued that this House is bound to revive the Petition under debate.

When we fled from the oppressions of kings and parliaments in Europe, to found this great Republic in America, we brought with us the laws and the liberties, which formed a part of our heritage as Britons.

You well know, sir, that when the Constitution was submitted to the People of the respective States for their adoption or rejection, it awakened the warmest debates of the several State conventions.