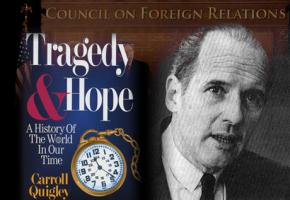 See the gallery for quotes by Carroll Quigley. You can to use those 8 images of quotes as a desktop wallpapers. 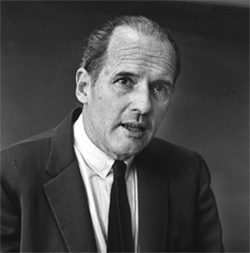 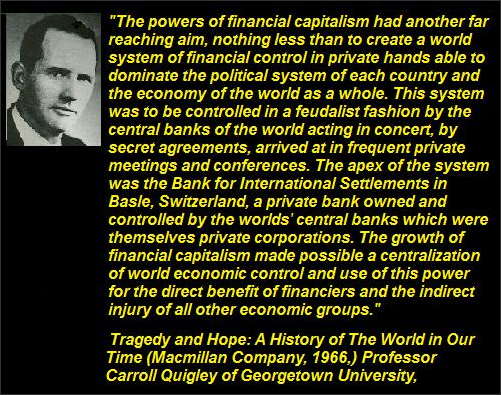 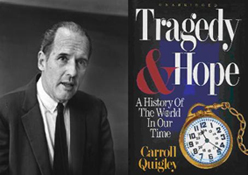 The argument that the two parties should represent opposed ideals and policies, one, perhaps, of the Right and the other of the Left, is a foolish idea acceptable only to doctrinaire and academic thinkers.

The history of the last century shows, as we shall see later, that the advice given to governments by bankers, like the advice they gave to industrialists, was consistently good for bankers, but was often disastrous for governments, businessmen, and the people generally.

In addition to their power over government based on government financing and personal influence, bankers could steer governments in ways they wished them to go by other pressures.

In fact, this network, which we may identify as the Round Table Groups, has no aversion to cooperating with the Communists, or any other groups, and frequently does so.

On this basis, which was originally financial and goes back to George Peabody, there grew up in the twentieth century a power structure between London and New York which penetrated deeply into university life, the press, and the practice of foreign policy.

Islam, the third in historical sequence of the ethical monotheistic religions of the Near East, was very successful in establishing its monotheism, but had only very moderate success in spreading its version of Jewish and Christian ethics to the Arabs.

This persistence as private firms continued because it ensured the maximum of anonymity and secrecy to persons of tremendous public power who dreaded public knowledge of their activities as an evil almost as great as inflation.

When goods are exchanged between countries, they must be paid for by commodities or gold. They cannot be paid for by the notes, certificates, and checks of the purchaser's country, since these are of value only in the country of issue.

When the business interests... pushed through the first installment of civil service reform in 1883, they expected that they would be able to control both political parties equally.

By the winter of 1945-1946, the Russian peoples were being warned of the dangers from the West.

Hitler's economic revolution in Germany had reduced financial considerations to a point where they played no role in economic or political decisions.

Once again the mastermind was Lionel Curtis, and the earlier Round Table Groups and Institutes of International Affairs were used as nuclei for the new network.

The failure of Christianity in the areas west from Sicily was even greater, and was increased by the spread of Arab outlooks and influence to that area, and especially to Spain.

The traditional Christian attitude toward human personality was that human nature was essentially good and that it was formed and modified by social pressures and training.

There were people who said the Society of Cincinnati in the American revolution, of which George Washington was one of the shining lights, was a branch of the Illuminati.