See the gallery for quotes by David Duchovny. You can to use those 5 images of quotes as a desktop wallpapers. 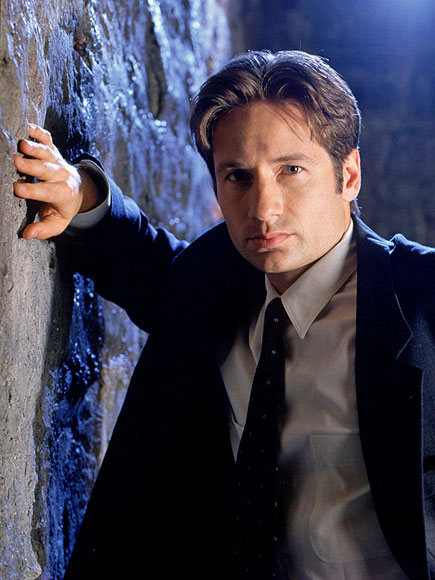 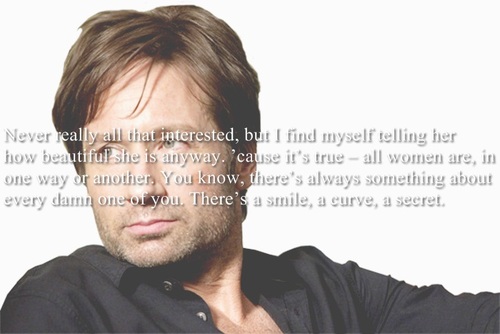 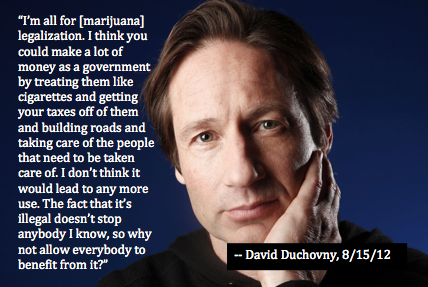 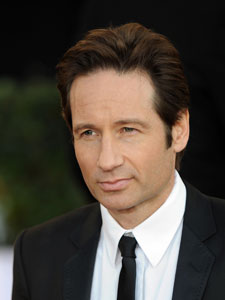 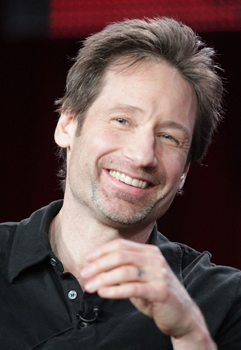 I don't like watching people work if they're making art.

I don't make decisions based on money.

I don't mind close-ups, I like them, but they're kind of forceful - you see a lot, you get a lot of information in a close-up. There's less mystery.

I don't need my phone to play me music. I need it to be a phone and an e-mail thing.

I don't think I'd ever be cruel to an animal.

I don't want to know what happens in any movie that I go to see.

I drive an electric car.

I enjoy trying to figure out the best way to compliment the picture and not overpower it.

I envisioned that as my life: staying in academia to make a living and then taking summers off to write my novels.

I feel like I came to acting late in a way.

I had a fear that I'd be typecast, but I don't really have that fear anymore.

I had to work in one of the most beautiful ski resorts in the world for almost three weeks. Pity me.

I just spend my money on the essentials. Just basically food and shelter.

I like my computer. But I don't know how to use it as well as the 10-year-old daughter.

I love animals and I love working with them because they don't lie.

I love the Lower East Side.

Much more quotes by David Duchovny below the page.

I may be learning guitar, but I'll never be able to sing.

I mean, there's chemistry in life and there's acting chemistry. I'm not saying they're the same thing, but they're as mysterious.

I mean, you always want everybody to pat you on the back and tell you you're wonderful every time you do something; I think that's human nature.

I never thought about the actors on television or film, like what kind of life they had.

I think of myself as more of a comic person. I don't know about a comic actor.

I think people are always trying to demystify whatever acting is, so they want to know what your method is.

I think Polanski's an amazing director.

I think there are ways in which shows can pop their heads up a little bit in the morass of everything you can watch.

I think we all choose our style from the ether and whatever is out there.

I wouldn't succeed at musical theater.

I'd love to direct more.

I'll instinctively know that I identify with a character.

I'm always trying to perfect the romantic comedy, though.

I'm kind of stupid when it comes to gadgets.

I'm not really a gamer.

I'm trying to protect what I advertise. That's my stance on any kind of self-expression.

I'm turning into a stricter dad.

I've made so many mistakes. But it is my feeling that you learn from failures, so I welcome them as often as I can.

If you have Darwin, Christ and Nietzsche, they're all going to talk at once. You need somebody who listens.

Tags: Once, Somebody, Talk

In high school and college, I was an athlete.

In terms of likeability, that's something that I don't think about as an actor when I approach a role.

In the U.S., oddly, we have images of men as arrogant and aggressive.

It's always like you write a poem when you can't really say what you're trying to say.

It's hard to find scripts that know what they are from page one to page 115.

Tags: Else, Marriage, Someone

Most journalists expect me to answer all their questions about aliens and spaceships.

One of the nice things about acting is that it allows you to open up to the other people within you.

Part of being an actor is letting things come about organically as opposed to forcing them.

People always love and respect characters who speak the truth, even if the truth hurts.

Sex is great until you die, but it's never as great as it was when you were a kid, when it was a mystery.

Sometimes the better the writing, the harder it is to play because you really want to service it.

There's nothing wrong with acknowledging the panoply of life's rich experience.

Well, I still write poetry, but I wouldn't call myself a poet.

When I grew up, I was in Manhattan the whole time. But my kids have been all over the world.

When I started getting notoriety it was cheesy to appear in a commercial.

You become tyrannized by this notion that women must not only be treated equally, but they must never fail.

You can go through life and actually speak your mind and do it in an articulate fashion and with a really intelligent point of view.

You can't control your mind. Why would you want to?

People think celebrities don't have to worry about human things like sickness and death and rent. It's like you've traveled to this Land of Celebrity, this other country. They want you to tell about what you saw.

Every day I try to do breathing exercises, meditation, and yoga. These things sound awfully cliche, but they help me slow down and try to point to a truth.

I do not think that Mulder trusts any one other than Scully. He s very solitary. She is the only one who takes him seriously. I don t know if they re in love. In a way, their relationship is deeper than that, because they cannot live without each other.

Just like every show has a tone, every show has different people on it playing different games. I don't say 'game' in a pejorative sense, I just mean, these are different stories that we tell ourselves when we go to work.

My entire life has been an attempt to get back to the kind of feelings you have on a field. The sense of brotherhood, the esprit de corps, the focus - there being no past or future, just the ball. As trite as it sounds, I was happiest playing ball.

One of the scary things is that, when you're a kid, you look at your dad as the man who has no fear. When you're an adult, you realize your father had fear, and that you have it, too.

98% of the people in the world are harmless and wish you well, but it only takes one person who doesn't. That's what you're constantly on guard against.

Fame does lead to money, which I don't have a close relationship with. I'm the kind of guy who never sees the money - it all goes somewhere else. I don't understand it, I don't like to deal with it. I have a fear of not having it, because I grew up without it.

I understand the self-loathing and the resentment, and the discipline that it takes to sit down in front of a typewriter or computer every single day, whether it's going well or not going well.

I was about 26 or 27 and it was imperative that I make a living right away and it's hard to make a living on stage, so I started in television and film.

I've run into certain geniuses of individualism - they are very few and far between - who live their lives completely on their own terms; they are very powerful and have a great amount of happiness. We all should aspire to that.

Maybe the best things about celebrity are the things like being able to get that seat on the plane that you wouldn't normally get, but that's kind of like cheating.

My favorite parts of work as an actor and a director are those unplanned mistakes that do happen, because it's like catching lightning in a bottle. It's the best part of what we do.

People think celebrities don't have to worry about human things like sickness and death and rent. It's like you've traveled to this Land of Celebrity, this other country.

There are certain things I learned when I first started learning about acting, to try and place the character physically and emotionally. And the way you place them emotionally is often with humor.

Whenever somebody says they need an angle for their story I always fear that they've got an idea and they want me to fit into it or they want me to come up with an idea myself or I'm supposed to be more revealing than I've been, and to me it just sounds like something I don't want to do.

Willie Mays was the best ever. When I was in college I once made a catch like the one Mays made over his head. Sometimes when I'm lying in bed at night I think about it. It still makes me warm.

The key is to get to know people and trust them to be who they are. Instead, we trust people to be who we want them to be - and when they're not, we cry.

I've turned down jobs because I've said, 'Honestly, I can't find my way in. I can't do it. I love you, as a director. I think the script is good. You deserve better than I think I can do.'

I love dogs. They live in the moment and don't care about anything except affection and food. They're loyal and happy. Humans are just too damn complicated.

Women's fashion is a subtle form of bondage. It's men's way of binding them. We put them in these tight, high-heeled shoes, we make them wear these tight clothes and we say they look sexy. But they're actually tied up.

I always dreamt of being a basketball player. A dream that only I believed in.

What makes me mad is arrogance, pretension, putting on airs.

I lost my virginity when I was 14. And I haven't been able to find it.

I feel I have to work hard to nurture whatever talent I have as an actor. I feel like it's not natural to me. So I don't take it for granted... What I think is my natural ability - which is writing - I think I totally take that for granted.

I think patience is a skill and I wish I had it.

On the one hand, people think they own kids; they feel that they have the right to tell the kids what to do. On the other hand, people envy kids. We'd like to be kids our whole lives. Kids get to do what they do. They live on their instincts.

Tags: Off, Put, Together

I don't believe in a conspiracy to hide the existence of extraterrestrial life.

I enjoy comedy and I hope that people enjoy watching me do it.

I think the real heroic teachers are the ones who work with kids, like my mom and my sister do.

If my work was good enough, I would never have to do publicity.

In this age of media and Internet access, we are much more talkative than ever before.

The happiest moment of my life was probably when my daughter was born.

Without whining and without making myself a tragic figure, there is no replacement for the loss of your privacy. It's a huge sacrifice.

A lot of times passion projects or films are difficult to make because they don't have proven directors attached to them.

Actually, I have an interest in finishing my Ph.D., but I just know I never will.