See the gallery for quotes by Mia Wasikowska. You can to use those 7 images of quotes as a desktop wallpapers. 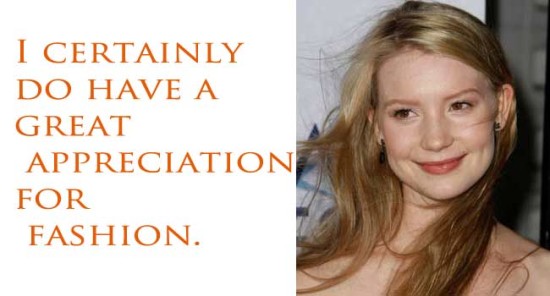 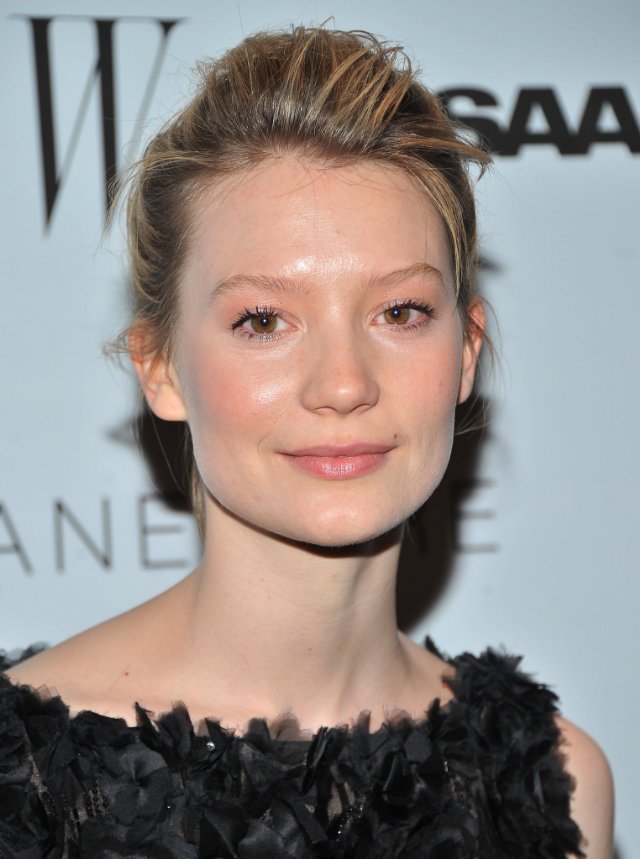 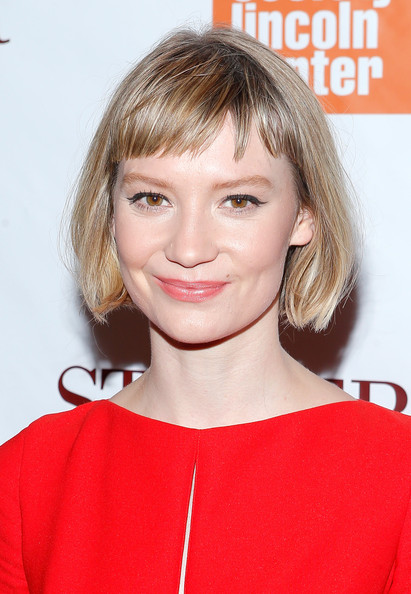 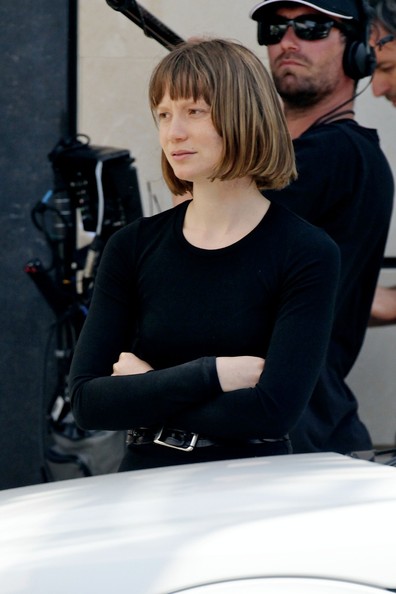 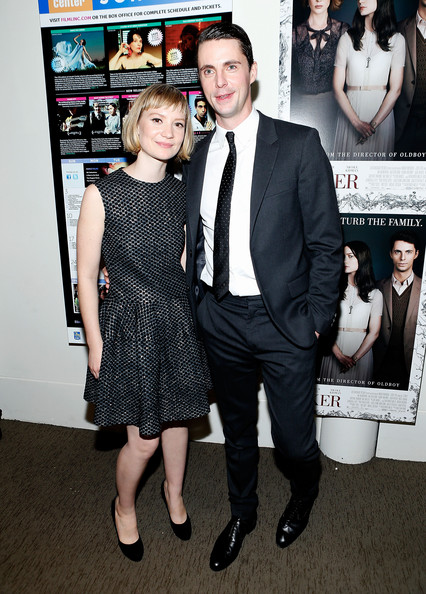 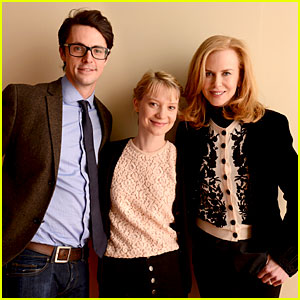 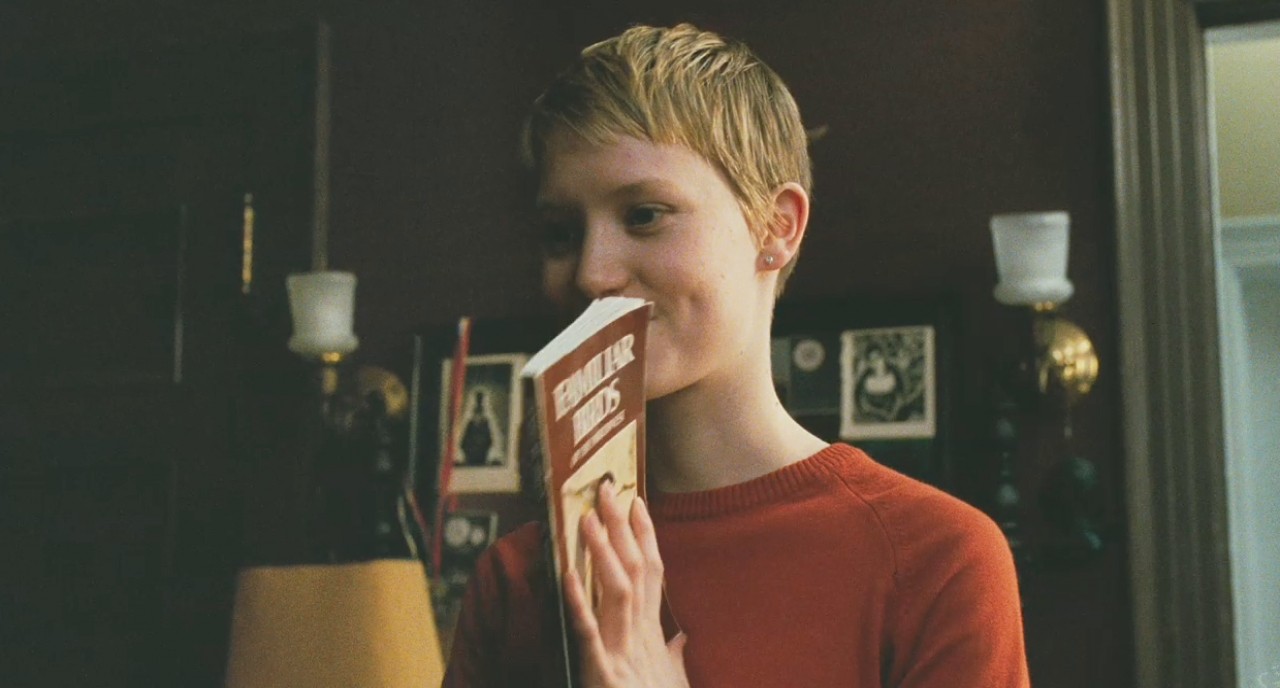 I love seeing my family.

I rarely meet other young actors.

I think it's really important for actors to have another creative outlet, or for anyone, really.

Tags: Another, Anyone, Creative

I want to just do my job and do it well.

I want to keep doing roles that are challenging and different.

I was probably a bit of a mimic when I was a kid, and I used to imitate people.

I was shy at school.

I would hope everyone would be a feminist.

I'd love to go off to college to study photography, art history, humanities.

I'm a huge sucker for comfort.

I've been honoured to portray such intelligent and sophisticated roles.

I've had a great experience with pretty much everybody I've worked with.

I've never been happier to be born in this time than when I was wearing a corset.

It's amazing how much you can absorb on a film set.

My mom used to have a lot of European cinema playing in the house, so I'd catch bits and pieces of films.

Often, if I read a story and I'm moved, I have an understanding for a character and I don't really know why.

Once you're put out there in the public eye, people feel a certain ownership over you.

Photography, for me, is something I can control fully. It's wholly my own expressions.

Someone once told me to believe 5 percent of what everybody tells you.

Tags: Everybody, Once, Someone

The jobs I enjoy most are the ones where I never feel like I'm performing. I'm just feeling things.

There comes a point in your life when you realize your parents aren't perfect.

Much more quotes by Mia Wasikowska below the page.

Traveling to Russia and Germany and being able to see the world at a young age was really cool for me, and I really liked that.

What I like about film is it explores imperfections.

When you look at magazines, you feel so inadequate and so small and you feel really imperfect, when you're constantly seeing these images.

With a corset on, you can't breathe properly.

With both acting and ballet, often you can't just choose when you do it, whereas a painter can go at his own pace.

With dance, you learn to channel nerves into energy, excited energy.

You have an awareness of your body and how to use it and I think that if you can embody a character physically it's another really useful tool.

All the time that I'm acting with an animated character, I'm looking at a tennis ball or sticky tape or an eyeline or a man in a green suit. There's no real environment, just this electric green that's blaring into your brain.

As a teenager I was very anxious. I had a lot of energy and passion that I wanted to channel into creative things, and I always felt like I wasn't achieving enough.

Feminism is just about equality, really, and there's so much stuff attached to the word, when it's actually so simple. I don't know why it's always so bogged down.

I always collect a bunch of images for every film that I do, that reminds me of an essence of the character, or the time that they live in, or what they're experiencing.

It's really rare as a teenager to be offered a role that actually resembles what it's like to be a teenager, because there are so many stereotypes that might be attractive to watch, but make you think: 'Who is that? Who has that life at 16?'

When I step back and look at all of these really successful people that I've worked with, one thing I do take away from it is how hard they work and how focused they are.

Dancers are kept in a perpetual state of pre-puberty, and for young girls in particular, that type of pressure breeds insecurities.

I like to do projects that challenge me, and hopefully in turn challenge the audience, or open your eyes to something you're not aware of.

The wardrobe is always the last piece of the puzzle. When you step into the clothing, that's the final step to figuring out that character.

Although I'm not particularly troubled myself, I do have a lot of empathy for troubled characters.

I was a bit of a loner as a teenager. I never went to a single social event, because they terrified me.

Acting really suited me because I could connect as an actor to emotion.

As an actor you have to wait for someone to cast you, so you're relying on the business.

Coming from dance, I feel acting is - I'm not going to say easy, because it's not. But the dance world is more hard-core.

Dance has such an intensity to it. You become, in a way, an intense person.

Dance is such a stressful environment.

Doing an accent removes you from yourself and reminds you, every instant, that you're playing a part.

Even if you're independent, I think you get lonely.

Everybody who is an actor has been acting since they were three.

Fame is useful in certain ways, because it helps you get more roles.

I always start a film thinking I know how to do it, then I learn all over again.

I always try and learn as much as I can from different departments on a film set.

I definitely have an appreciation for fashion.

I don't consider myself a starlet or a Hollywood person.

I get restless easily so I always want to keep working, but I am trying to pace it as well.

I got the first thing I auditioned for - a guest role on two episodes on 'All Saints,' and I don't think I had ever been that excited.

I like characters who remind me of someone I know.

I like my anonymity - that when I meet people they don't know me.

I like to be absorbed in what my character's doing.

I like to think of myself as an observer.