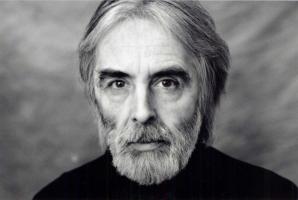 See the gallery for quotes by Michael Haneke. You can to use those 8 images of quotes as a desktop wallpapers. 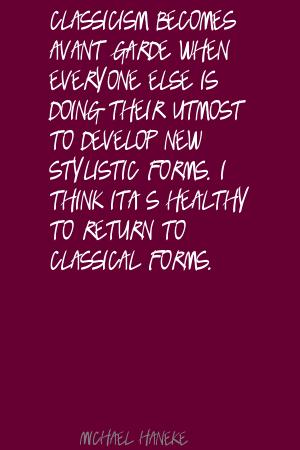 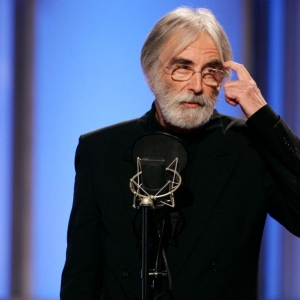 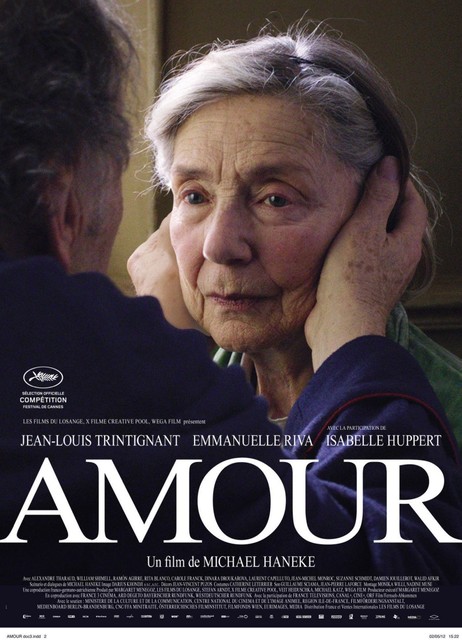 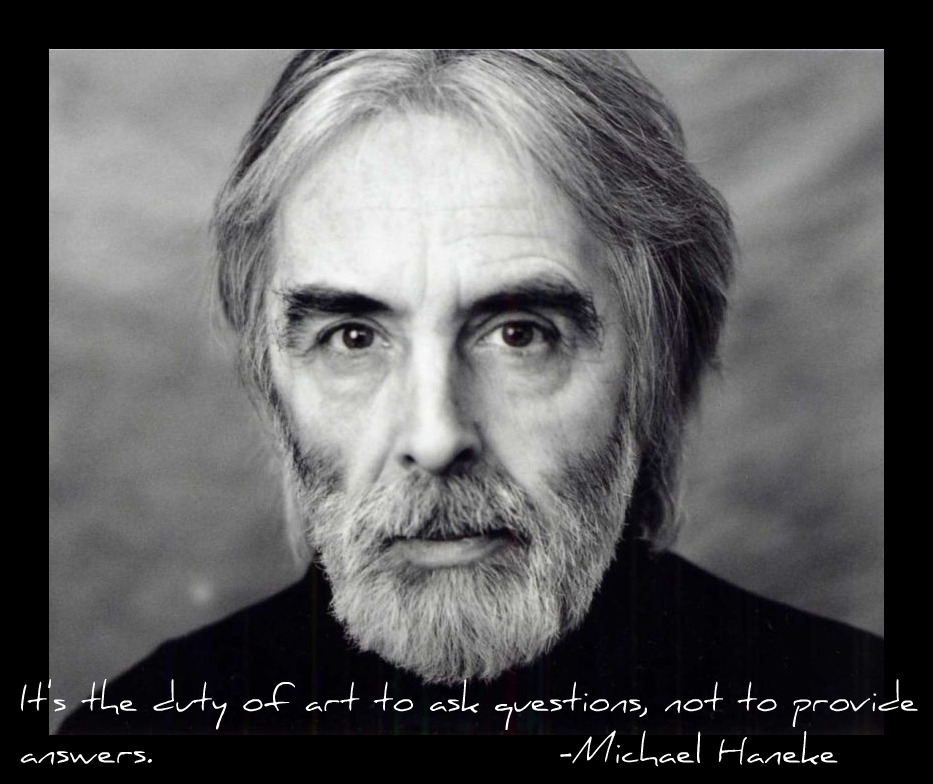 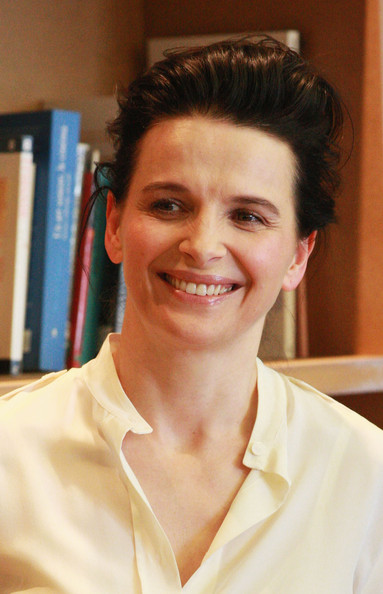 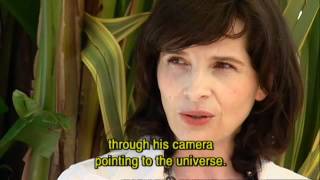 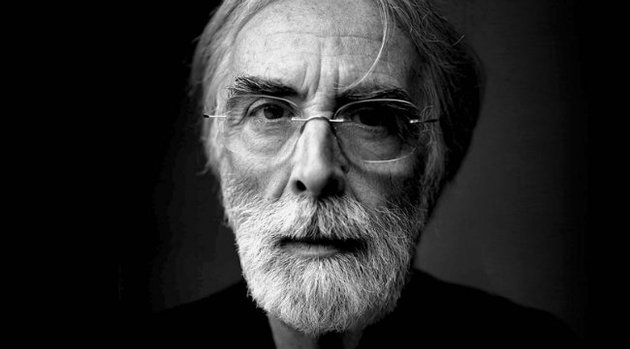 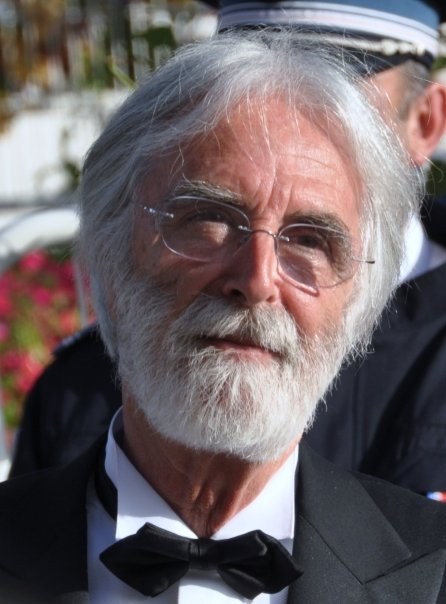 Classicism becomes avant-garde when everyone else is doing their utmost to develop new stylistic forms. I think it's healthy to return to classical forms.

Tags: Else, Everyone, Healthy

Films for TV have to be much closer to the book, mainly because the objective with a TV movie that translates literature is to get the audience, after seeing this version, to pick up the book and read it themselves. My attitude is that TV can never really be any form of art, because it serves audience expectations.

Films that are entertainments give simple answers but I think that's ultimately more cynical, as it denies the viewer room to think. If there are more answers at the end, then surely it is a richer experience.

I give the spectator the possibility of participating. The audience completes the film by thinking about it; those who watch must not be just consumers ingesting spoon-fed images.

I love actors, both my parents were actors, and the work with actors is the most enjoyable part of making a film. It's important that they feel protected and are confident they won't be betrayed. When you create that atmosphere of trust, it's in the bag - the actors will do everything to satisfy you.

I make my films because I'm affected by a situation, by something that makes me want to reflect on it, that lends itself to an artistic reflection. I always aim to look directly at what I'm dealing with. I think it's a task of dramatic art to confront us with things that in the entertainment industry are usually swept under the rug.

I never suffered from the absence of a father. On the contrary, as a child I was more inclined to see men as a disturbing factor. It made things difficult for me when I started working as a director.

I think it's a little simplistic to explain a work through the psychology of its author. In other words, that Haneke has emotional problems, so I don't have to take his films seriously. By using this argument, the viewer retreats from the challenges of the film.

I want to make it clear: it's not that I hate mainstream cinema. It's perfectly fine. There are a lot of people who need to escape, because they are in very difficult situations, so they have the right to escape from the world. But this has nothing to do with an art form.

I'm lucky enough to be able to make films and so I don't need a psychiatrist. I can sort out my fears and all those things with my work. That's an enormous privilege. That's the privilege of all artists, to be able to sort out their unhappiness and their neuroses in order to create something.

I'm not someone who enjoys long talks, long rehearsals. I'm very technical: I tell my actors, you come in, you sit down, you pick up a coffee, you look here, you say the line. We try it with the cameras rolling, and if it doesn't work, we adjust it until it does. It's very simple.

I've never let producers tell me what to do. Even when I was making television, I always did what I wanted to do, and if I couldn't, I didn't do it. It was a freedom that, these days, young directors starting out don't have.

In all of my work I'm trying to create a dialogue, in which I want to provoke the recipients, stimulate them to use their own imaginations. I don't just say things recipients want to hear, flatter their egos or comfort them by agreeing with them. I have to provoke them, to take them as seriously as I take myself.

It's unbearable when someone changes around you. Just imagine that your life partner changes, then it is difficult to cope with. Or your mother. Or your father. They were strong and now they're like a baby - it's not so funny.

Mainstream cinema raises questions only to immediately provide an answer to them, so they can send the spectator home reassured. If we actually had those answers, then society would appear very different from what it is.

My father and I had a good relationship, it was very relaxed. He had a lot of humour. He looked a little bit like me, although he had no beard. He had the appearance of a very elegant British-looking man.

My mother as a young girl went out with a young SS officer and she didn't really know what was going on - she just liked the uniform. When he told her about the things that he did, she was disgusted and broke up with him.

Personally, I can't stand violence. In any standard American mainstream movie, there's 20 times more violence than in any one of my films, so I don't know why those directors aren't asked why they're such specialists for violence.

'The White Ribbon' had to be in German because of the subject matter, that was clear. But in the case of 'Amour,' it could have taken place in any country.

There are really two types of laughter on the part of the spectator. There is the laughter of recognition - which means seeing things you're familiar with and laughing at yourself. But there's also hysterical laughter - a way of dealing with the things we see that upset us.

There is just as much evil in all of us as there is good. We're all continuously guilty, even if we're not doing it intentionally to be evil. Here we are sitting in luxury hotels, living it up on the the backs of others in the third world. We all have a guilty conscience, but we do very little about it.

To be perfectly honest, I think that as I'm growing older, I'm just growing more impatient. I'll be very happy if at some point people say, 'Michael's grown wiser and softer in his old age.' But we'll have to wait and see what my next project is.

When I first envisioned 'Funny Games' in the mid-1990s, it was my intention to have an American audience watch the movie. It is a reaction to a certain American cinema, its violence, its naivety, the way American cinema toys with human beings. In many American films, violence is made consumable.

Much more quotes by Michael Haneke below the page.

When my first film 'The Seventh Continent' was presented here 12 years ago, non-Austrian spectators would come up to me and say, 'Is Austria that terrible?', whereas for me it wasn't about Austria but about highly industrialised cultures everywhere.

You can use your means in a good and bad way. In German-speaking art, we had such a bad experience with the Third Reich, when stories and images were used to tell lies. After the war, literature was careful not to do the same, which is why writers began to reflect on the stories they told and to make readers part of their texts. I do the same.

You'll see more violence in any television crime series than you will in my films... Art is there to have a stimulating effect, if it earns its name. You have to be honest, that's the only thing.

An artist is someone who should raise questions rather than give answers. I have no message.

Tags: Give, Rather, Someone

What we're doing for another person is more important than what we're feeling for them.

People expect me to be dark and gloomy, then write that I'm a jolly chap, and after all, that is what I am. I think it's a case of an absolute romantic naivety that there should be a parallel between the work and the artist.

Film is the manipulative medium par excellence. When you think back on the history of film and the 20th century, you see the propaganda that's been made. So there are moral demands on the director to treat the spectators as seriously as he or she takes himself and not to see them merely as victims that can be manipulated to whatever ends they have.

It's a fact that people who are in a weakened position, whether physically or mentally, have this perception of the outer world as threatening. Everything that is unexpected or unknown is seen as a potential danger.

It's impossible to consider living without ideals. However, when ideas lead to ideology, that's a very dangerous thing. Ideology then leads to creating the image of an enemy, and it leads to the murder and massacre that we've seen since the beginning of time.

All movies assault the viewer in one way or another.

As a European filmmaker, you can not make a genre film seriously. You can only make a parody.

As a private person, professionally I am invisible.

At its best, film should be like a ski jump. It should give the viewer the option of taking flight, while the act of jumping is left up to him.

Tags: Best, Give, Him

Drama lives on conflict. If you're trying to deal with social issues seriously, there's no way of avoiding violence, which is so present in society.

I try to get closer to reality, to get close to the contradictions. The cinema world can be a real world rather than a dream world.

I'm far more relaxed with German. I'm a control freak. I like to know exactly who's saying and doing what.

It's a disease of critics that once they've labeled someone, it's very hard to change their perspective. It's laziness.

It's harder to write a story with just two people in a room than with 50 characters.

Of course, we avoid death. To know something is inevitable is one thing. To accept, to truly feel it... that's different.

On the set I make jokes I can't get too involved, or it turns into sentimental soup. I try to keep it light.

Usually music is used to hide a film's problems.

What I like are films that take me seriously, that don't treat me as more stupid than I am.

And I don't believe that children are innocent. In fact, no one seriously believes that. Just go to a playground and watch the kids playing in the sandbox! The romantic notion of the sweet child is simply the parents projecting their own wishes.

And if there was one title that could be applied to all my films, it would be 'Civil War' - not civil war in the way we know it, but the daily war that goes on between us all.

Awards are important for all directors because they improve your working conditions. You're only as good as your last film, so if you get prizes or large audiences, then you get more money for your next film.

Because I'm the author of my screenplays I know what I'm looking for. It's true that I can be stubborn in demanding that I get what I want, but it's also a question of working with patience and love.